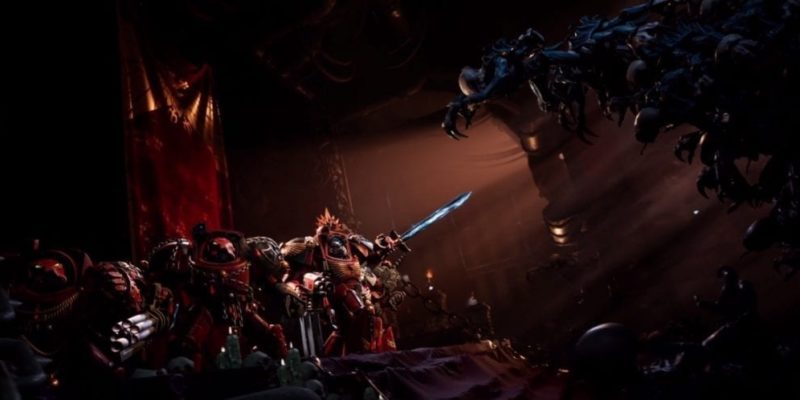 Space Hulk, a board game set in the Warhammer 40,000/Warhammer 40K universe, has been adapted numerous times into video game form. It seems Games Workshop has been handing the license over to various developers going back to the 90s. Electronic Arts gave it a try decades ago. Full Control also tried their hand at it. And now, Cyanide Studio is bringing it back with the studio’s second outing. Second? That’s because their first outing — an FPS called Space Hulk: Deathwing — folded faster than a Tau Water Caste diplomat squashed by a Baneblade tank. This time around, Cyanide Studio is hoping to do a faithful adaptation of the board game classic with Space Hulk: Tactics right down to dice roll results happening under the hood.

The question is: Will Space Hulk: Tactics make The Imperium proud? Or will it be another blight in the history of the Blood Angels, one that will make the Devastation of Baal seem like a quaint Sanguinalia evening? 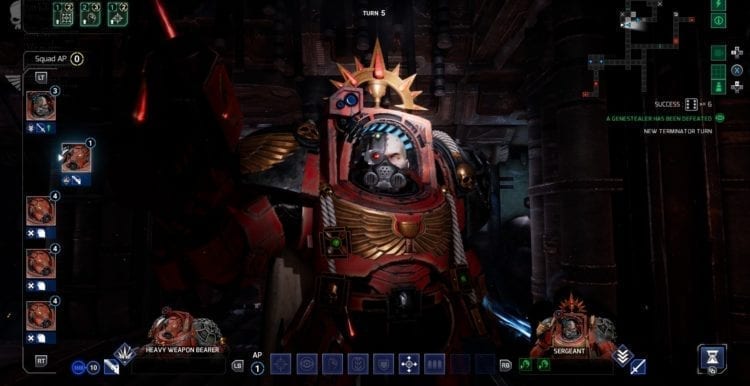 At first glance, one could give a thumbs up for the game — or a sign of the Aquila — owing to the visuals and presentation. The attention to detail is superb; this might be one of the best looking Warhammer 40K games around! Given the success of Total War: Warhammer and Vermintide 2, I do think it’s about time that the more popular sister franchise of Warhammer Fantasy Battles got some love.

Like any turn-based tactical game, Space Hulk: Tactics provides isometric and top-down views of the battlefield for you to plan your moves. However, it also adds a nod to past titles like Deathwing and even the 90s adaptations. That’s because you can play it in first-person mode.

Your Terminator Space Marines from the Blood Angels chapter, led by Sergeant Tahariel, are a bulky and heavily-armored squad, and you feel it with every thud and crunch in their movement. You even get Tactical Vision that allows you to see through walls. 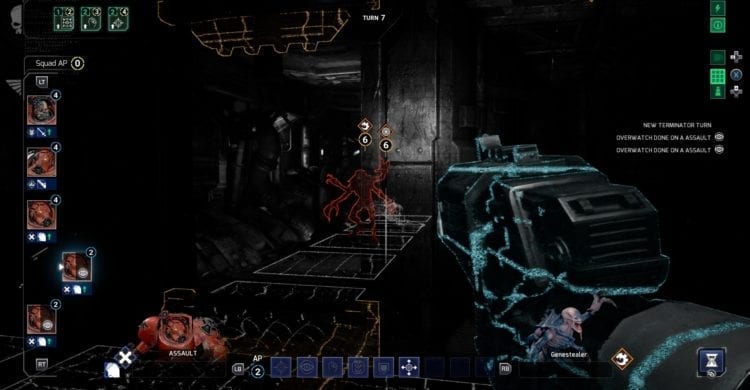 Arrayed against the sons of Sanguinius are countless Genestealers, humanoid Xenos hybrids, and vanguards of the Tyranid Hive Fleets. You get a sense of their animalistic and predatory nature whenever you’re surrounded. Oh, and for the first time ever, they also have their own campaign.

These battles take place aboard a Space Hulk — the Forsaken Doom — a gigantic amalgamation of several spacefaring vessels of various races. Maps are comprised of narrow passageways and cramped rooms where danger lurks in every corner.

For The Emperor And Sanguinius! 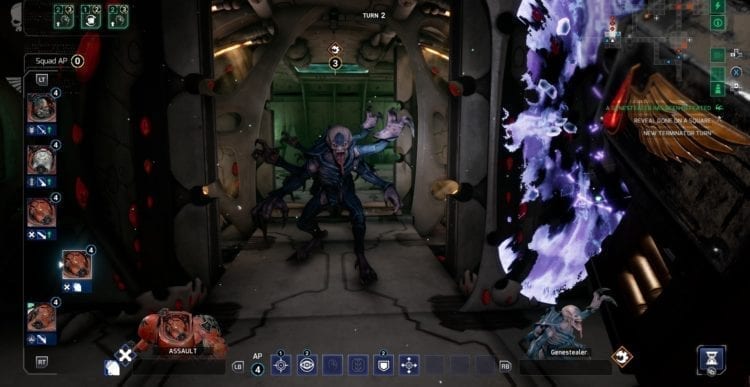 You’ll want to start off the campaign with the Blood Angels to get a feel of the traditional turn-based/tactical mechanics. Right off the bat, you’ll notice similarities to past Space Hulk titles and some of the more popular examples in the genre such as XCOM. You can take up to five Battle-Brothers for each fight. Likewise, you can pick different classes and load-outs depending on your needs. You’ll get some exposition from the Ordo Xenos and the Mechanicum Forge World as well.

Once you begin your campaign, your Adeptus Astartes squad will find itself outnumbered. Worse, they’re encumbered by their Terminator Power Armor which means you spend Action Points (AP) just to make your units face another direction. However, a new twist for this iteration of Space Hulk is that you can spend Command Points (CP) on the Card System to boost your squad’s capabilities. Some cards might increase their melee strength; others improve their ranged capabilities. If you don’t want to use a card, just convert it into AP so you can act again.

Playing as the Space Marines makes for a slow-but-steady and methodical campaign. You tend to find yourself on the defensive often. Unfortunately, that also happens to your enemies. One particular nuisance is something you’ll notice early on during the campaign. It’s when you place a unit on Overwatch and the Genestealer AI doesn’t even bother advancing anymore. 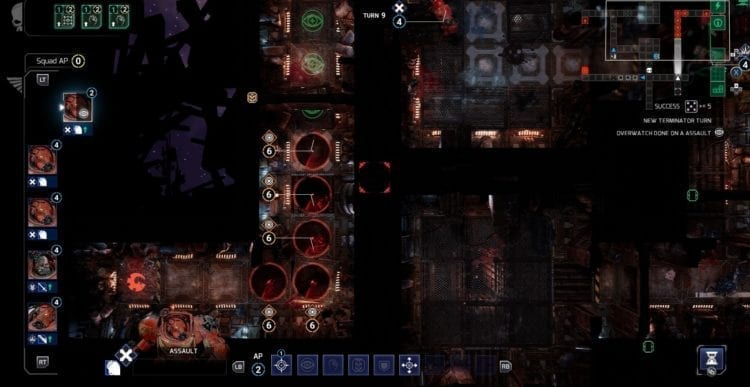 That means you can finish certain side missions just by putting units on Overwatch and hitting end turn over and over. Congrats, you won the mission — unfortunately, you did it in the most boring way possible. Developers have already noted this in a recent announcement and are planning an AI tweak in the near future. 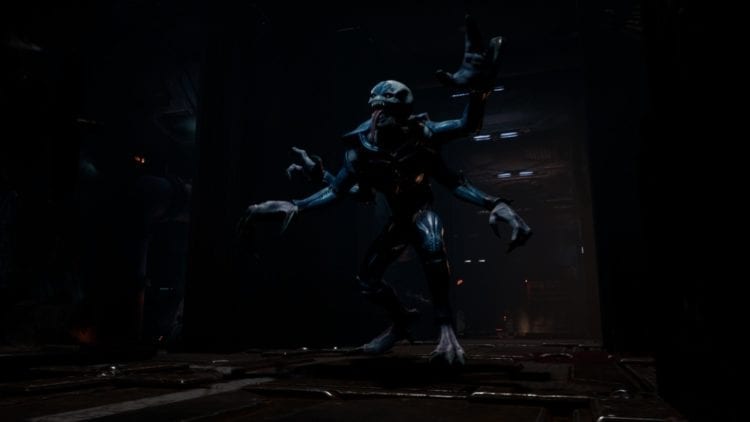 If you thought the Blood Angels gameplay was too monotonous that you’d rather go to sleep like a Necron or a half-dead Guilliman, then perhaps the Genestealer Campaign would be more to your liking. Similar to the Space Marines, the Genestealers also use the Card System albeit in a different way. When you get your turn, you can convert cards into units — this is your Conversion Phase. You place units in spawn points scattered around each map.

After that is your Action Phase where you can move around and attack. Since thousands of Genestealers infest Space Hulks, you have a near-limitless pool of units to swarm your opponents with. However, unlike the Space Marines, Genestealers focus heavily on melee combat and striking from the shadows. Since the Adeptus Astartes have unlimited Overwatch shooting capabilities, you’ll need to rely on luck and a lot of flanking to strike them down. 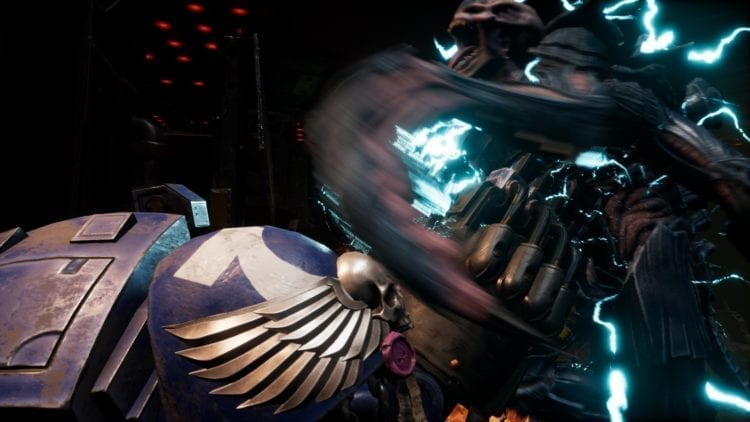 It makes for a very unique gameplay experience, one that generally breaks the monotony of the same old schtick in past turn-based tactical games. It’s like you’re playing a mix of tower defense/MOBAs in a turn-based strategy game setting — like Zerglings (StarCraft), Warrior Bugs (Starship Troopers), the Xenomorph hordes (Aliens), or creeps (Dota/League of Legends.)

So if you have an engaging campaign and a faithful adaptation of a Games Workshop classic set in the Warhammer 40K world, what exactly sets Space Hulk: Tactics back? 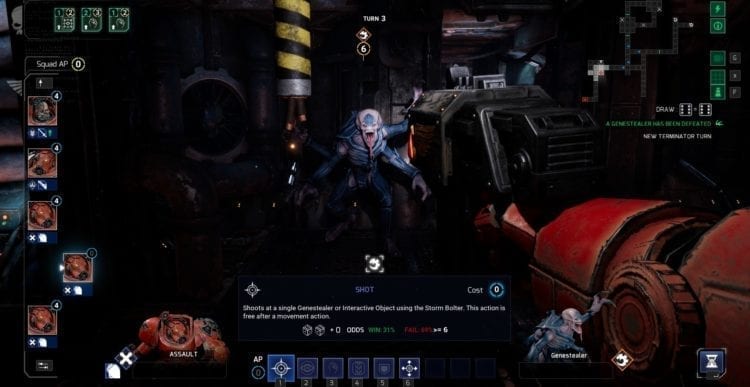 Unfortunately, the answer would be “a lot.”

Although combat takes place within the Forsaken Doom and you get to see various themes — from Imperial Navy interiors to Eldar and Ork vessels that have been mish-mashed into one gargantuan behemoth — everything seems so rote. Like the average Space Marine schedule, each mission (over two dozen main missions in the campaign and extra ones on the side) feels like you’re pushing through it like clockwork with very little variation. Never mind that certain objectives can be cheesed — whether it’s the aforementioned Overwatch mechanic, or just blocking an Eldar portal so Genestealers can’t pass.

The challenge is there but the AI is inconsistent even in later levels. Sometimes you’d get Genestealers who just wait for you to make a move; on other occasions, the AI could be highly aggressive. The same goes when you’re playing as the Xenos hybrids and you’re just waiting for the Space Marines to stop using Overwatch. There are missions towards the end where you need to be on your toes and one misstep will see your squad annihilated. Then there are those where you just laughably hit end turn over and over. In some missions, you might even get the same map such as the one where you’re tasked to defend a console for eight turns.

Progression is also fairly linear. Despite the addition of the card system, only a few skills are warranted come mid to end-game. The card “Push Forward” which gives each Terminator +2 Action Points is one of those; others seem tacked on or are just conversion fodder.

Where’s The Tech-Priest When You Need Him? 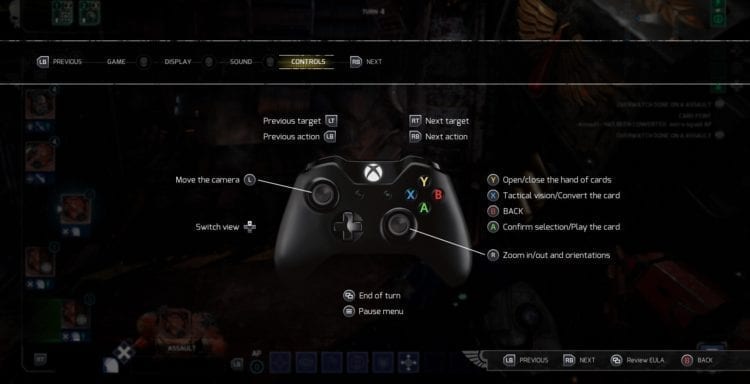 Another point of contention is the performance. If you checked out our Assassin’s Creed Odyssey benchmark, you’ll know that my rig can easily handle that game on Ultra High settings with no problems. For Space Hulk: Tactics, even though my game never crashed I did experience some slowdowns or short freezes.

AI issues aside, even the AI’s turn takes too long. I can appreciate how intimidating it is hearing Astartes approach but 20 to 30 seconds of that each turn is a bit too much. I was looking for a “skip AI animation” option or keybind only to find none.

Speaking of keybinds and controls, something odd tends to happen when I use my mouse and keyboard. There were times when I tried to set the direction my unit was facing only to find out my mouse was stuck. I had to switch to my Xbox controller — thank The Emperor for controller support — which was fairly responsive for the most part. Again, the slowdown issue, though minor, can happen every now and then. This time it’s when you tab from one unit or action to the next.

Multiplayer, Skirmish, And The Map Editor 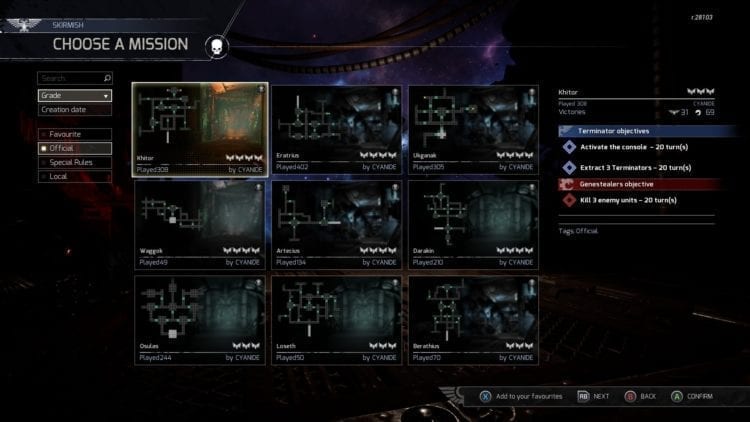 I tried to play a few multiplayer games only to find that no one was around. While writing this review, I even left my game running to search for an opponent. Update: Still no results. Either no one’s online or matchmaking is an issue. I then decided to face the AI for a Skirmish match and found it more challenging than the campaign. Cheesing still applies, although Reaperfex biomorphs can be very annoying to deal with. 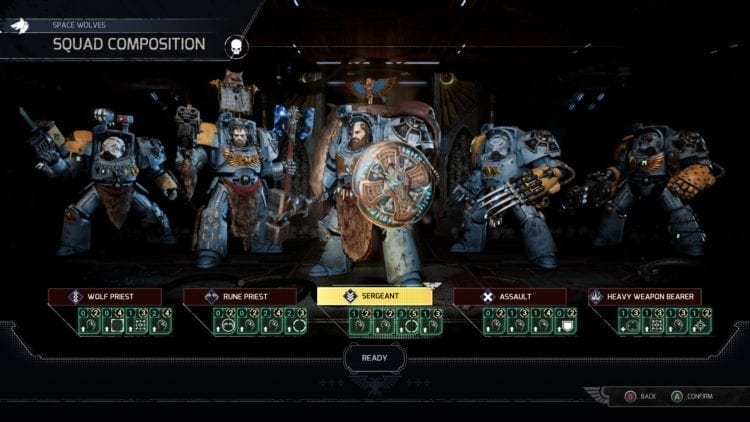 Squad Customization, however, is a treat. An army/squad designer is something that many Warhammer 40K fans enjoy. After all, it’s a hobby where you paint miniatures so you’d like to make each Space Marine or Genestealer bioform unique.

For the Space Marines, you can choose from the liveries of the Blood Angels, Ultramarines, Space Wolves, and Dark Angels. You can even change the quality of your armor from “fresh off the assembly line” to “Malcador’s balls! You survived that?” Likewise, you can make changes for your Genestealer squad. You’ve got the Purestrain, and those from the Hive Fleets Leviathan, Behemoth, and Kraken. 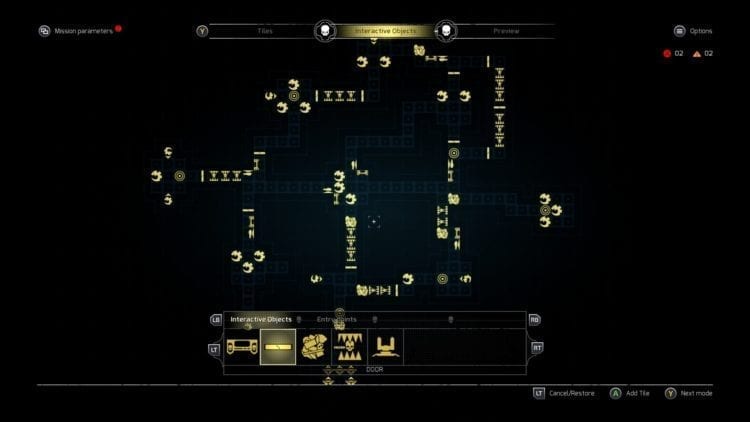 The Map Editor is also a welcome inclusion to Space Hulk: Tactics. You can create your own maps with their own obstacles and objectives. You can even choose to have an Imperium, Eldar, or Ork layout. Once you’re satisfied with your creation, you can preview it to see how well it would look once you’re playing. After that, you can go ahead and publish it. You can create something that’s nearly impossible to beat just to up the ante.

Space Hulk: Tactics has everything going for it in order to succeed. Cyanide Studio has experience with Games Workshop properties and they’ve done an FPS version of Space Hulk before. The visuals and details are some of the best you’ll see in any Warhammer 40K title. It’s an adaptation that many fans of the Space Hulk board game will appreciate and even praise. Unfortunately, for the average turn-based strategy player, you’ll probably undergo a self-induced Red Thirst due to some annoyances.

Problems with the game’s performance and lackluster AI, along with matchmaking issues which I’ve personally experienced mar an otherwise promising outing. In the grim darkness of the far future, there is only war and a Tyra-need to polish Space Hulk: Tactics further.

Space Hulk: Tactics offers a unique and engaging experience for fans of the board game, however, several issues prevent it from reaching the light of the Astronomican.