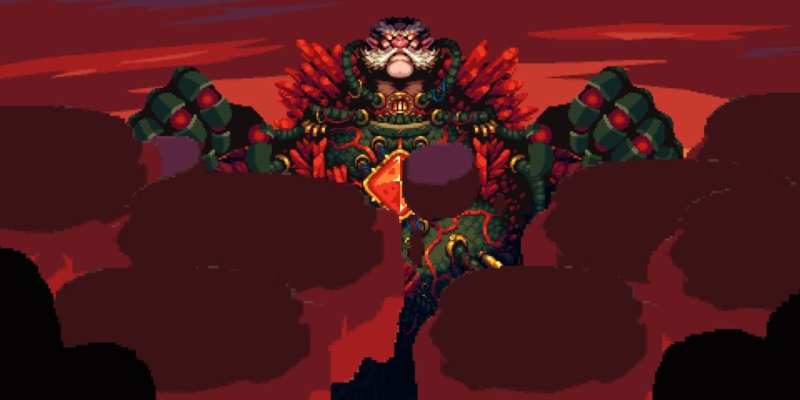 It’s often difficult for indie games to carve out their niche in a crowded rogue-lite genre full of absolute gems such as Risk of Rain 2, FTL, and Dead Cells. With Sparklite, three-man studio Red Blue Games attempts to set their title apart by combining a constantly-changing map with a 16-bit steampunk aesthetic in what seems like the love-child of Link’s Awakening and Binding of Isaac.

Does Sparklite shine new light into the action-adventure genre? Or do its lofty goals fail to spark interest?

Sparklite introduces the player to Ada and her robot sidekick as their spaceship crashes on the planet Geodia amidst a global catastrophe. A disturbance in the planet’s “Foundation Stone” has caused massive tectonic shifts in the structure of the landscape. It turns out that an evil prospector named Baron has begun utilizing the element sparklite to dig deep within the planet for his nefarious purposes — probably to take over the world or some other bad guy stuff. Ada soon discovers that she is the chosen “starborn child,” and only she can stop Baron and his four titans from reaching the Foundation Stone before it’s too late. 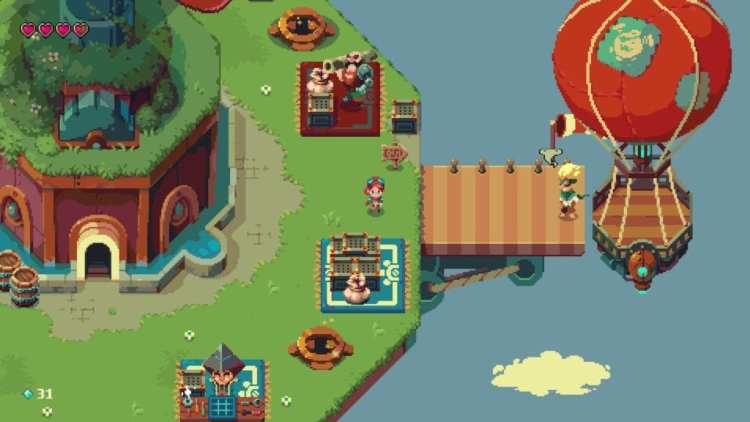 However, Ada isn’t alone on this journey. The inhabitants of Geodia have been living in a floating city high above the mainland in order to avoid the earthquakes, and all of them possess unique traits that can help Ada on her journey. The floating city soon becomes your home base. Here, you can purchase upgrades, customize loadouts, and recruit new adventurers. All of this is done through Geodia’s naturally occurring resource, sparklite, which you can gain from trees, chests, and overworld enemies. 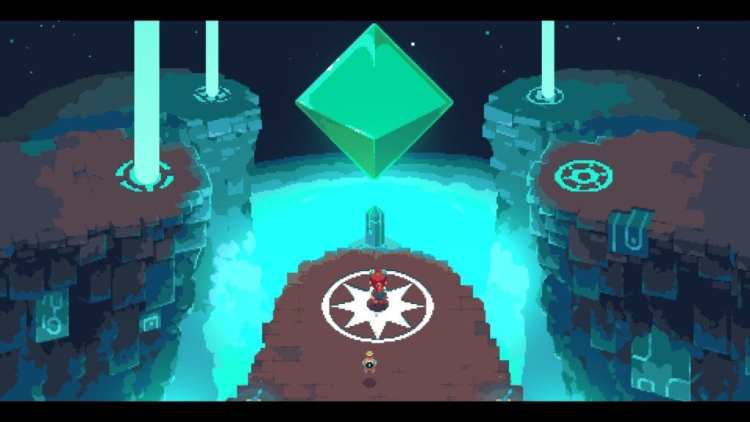 Sparklite plays it really safe, with a tragically unoffensive story almost completely deprived of dialogue. The different characters you meet along the way are well-written and often funny, but they’re also reduced to little more than a momentary reprieve from your adventure. Ada and her robot are essentially silent aside from a few off-comments, which leaves Sparklite feeling kind of empty. I didn’t feel motivated to continue or like I ever cared about any of the characters I met, as our exchanges were at most transactional. The title’s Steam page has more lore hidden in it than the actual game does, which is quite a shame.

A real walk in the spark

If you’ve ever played a Legend of Zelda title, Sparklite will be a familiar experience for you. Essentially, there are four biomes: the Vinelands, the Goldenwoods, the Acid Bog, and the Shifting Sands. Each of these contains unique enemies and a single boss battle. Upon conquering each area’s boss, you will be able to steal a bit of their power and use it as your own. However, beating the four titans won’t be easy using just Ada’s wrench and rocket boots. You’ll have to explore each biome to gather “patches” and “widgets,” which provide valuable upgrades like extra health, more damage, healing, speed boosts, or explosives. 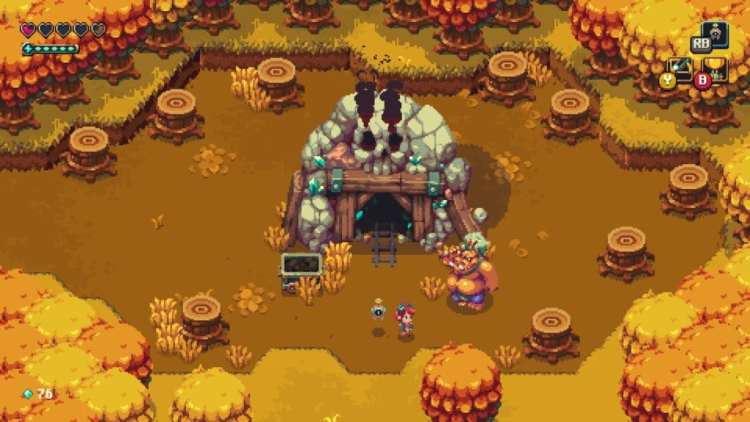 “Patches” are placed on Ada’s wrench (why no one thinks to give her a sword, I’ll never know), each offering unique upgrades. Ada’s wrench only has nine patch slots, so you’ll have to mix-and-match loadouts to fit your playstyle the best. Personally I liked adding a few patches for extra health alongside map upgrades, which provide much-needed waypoints on the map for mini-dungeons and bosses.

These are especially important considering that every time Ada fails, she not only loses her current items, but the overworld of the game completely changes. This means that when you expend your last heart piece on a boss battle or ill-timed jump over a ledge, the location of enemies, chests, and dungeons becomes completely different for your next go-around. 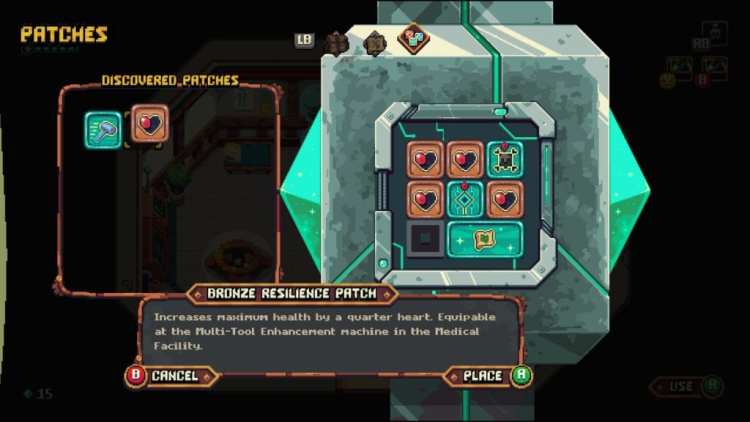 Completing various mini-dungeons will grant Ada weapon blueprints and “widgets” which can be used to solve various environmental puzzles along your journey. While puzzles are typically limited to shooting a switch or blowing up a rock, these items will prove invaluable when you eventually arrive at boss battles.

Not to be taken lite-ly

Don’t let Sparklite‘s adorable character models or cute enemies trick you — this game can be devastatingly hard. While the enemies on the surface don’t put up much of a fight, delving into dungeons will have you on the edge of your seat as you sweat out 10 to 15-minute-long boss battles complete with lasers, rockets, giant saws, and bombs. Each attack does have a tell, though on certain occasions you’ll need to respond instantaneously to avoid a devastating damage penalty. This can be really frustrating at times. 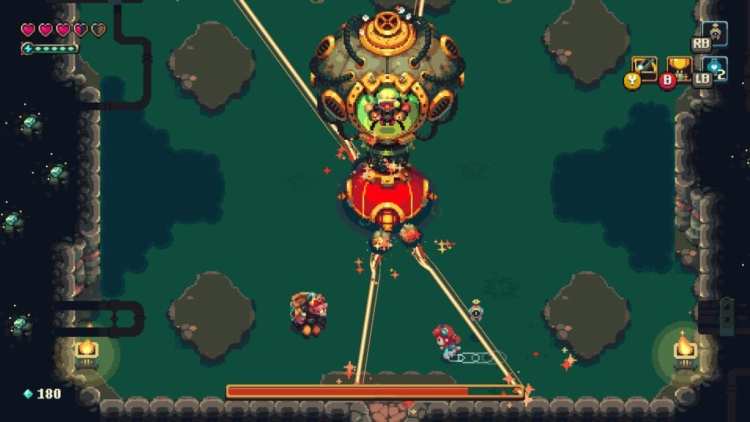 There is a level of randomness to each boss battle that can often throw off your timing, but it isn’t inherently a bad thing. Sloppy hitboxes, on the other hand, had me inches from throwing my controller across the room on what seemed like my 100th attempt at a specific boss. Preparing for these battles and subsequently failing is infuriating, especially when you feel like you didn’t do anything wrong. It really cheapens the feeling of exploration in the end.

Lite at the end of the tunnel

In terms of performance, I played through the entirety of Sparklite on my Microsoft Surface Pro 4 and never dropped below 60fps, so I can’t imagine any modern system struggling to run it. That said, you’ll definitely want to play through this one with a controller, as aiming your skill-based weapons is a chore with the keyboard and mouse. While we’re talking about tech, I should mention that the sound design showcased in Sparklite is absolutely incredible. Wherever Ada is on the screen determines the direction her sound comes from. This can be a bit jarring at first, but it’s these little touches of personality that make the world of Sparklite so endearing. I just wish Red Blue Games would have expanded on its world a bit further.

The more I reflect on the eight hours it took me to complete Sparklite, the more I realize how much fun I really had exploring the ever-shifting overworld of Geodia. The loop of gathering items, searching for bosses, discovering new areas of the map, and conquering 15-minute-long boss battles is something I could see myself doing for another 50 hours. However, this system’s pseudo-permadeath can become infuriating during the latter half of the game, as sloppy hitboxes and random attacks from bosses can leave you feeling cheated.

Sparklite is a genuinely fun and unique take on the rogue-lite genre. Even so, the end result feels like it could use another few months of development to fix its annoying quirks.

Sparklite is overflowing with charm, and it is an absolute delight to explore the constantly shifting land of Geodia. While shallow gameplay, a lack of narrative complexity, and a few frustratingly random boss battles hold it back from "must-play" status, there's definitely something here for old-school Zelda and rogue-lite fans alike.