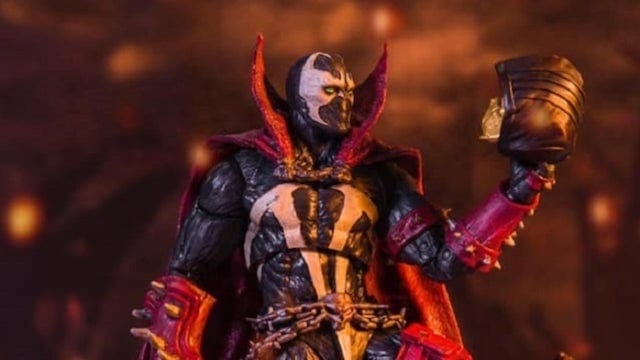 And here we thought that Joker was going to have a hell of a time in the game. Thanks to some new details from his creator, we’ve learned that Spawn is set to arrive in Mortal Kombat 11 this March. Todd McFarlane has revealed a first look at the character with a new figure, featured in the Twitter post below. As you can see, he’s got quite the iconic look going for him.

While one might think that this is the date Spawn will make his debut, it’s actually the day we’ll see the first gameplay. Final Kombat 2020 is set to take place in Chicago, and the Spawn gameplay trailer will debut at the same time. In fact, McFarlane is ready to appear at the event, along with Keith David, who will once again fill the voice role for the character. Creative director Ed Boon and Shang Tsung actor Cary-Hiroyuki Tagawa will also be at the event.

What can we expect from Spawn?

Well, judging how rad the Joker trailer was when it made its debut earlier this year, Spawn could have quite the move set. We don’t have any idea what he’ll bring just yet. However, with his trademark chains and unstoppable hellish attacks, he’s sure to make a formidable opponent.

Spawn’s debut date is March 17, when he’ll be available to users that paid for the Season Pass. He’ll be on hand for other players later in the month, though a date hasn’t been specified yet.

Whatever the case, Spawn looks badass and should bring the game’s first season of DLC to a thunderous close. Now we can only imagine what a potential second season could bring.

Mortal Kombat 11 is available on Steam now. There’s still time to join the Season Pass fun if you haven’t already. Scope out the array of guest stars below!