The Mortal Empires campaign for Total War: Warhammer 2, which combines (most of) the map space from both titles and reintroduces the playable factions from the first game, came out last week. I’ve had a press copy a little longer than that, and spent some time with a fresh Skarsnik campaign. Mortal Empires is an ambitious project, but at the moment some pretty weighty issues are holding it back.

Those problems are all solvable with time, and, in retrospect, perhaps that’s what Mortal Empires needed. It was released on 26 October, basically one month after Total War: Warhammer 2. I understand the desire on Creative Assembly’s part to do this: a combined campaign (ultimately of all three Warhammer titles) has been a long-term promise, it boosts player and press interest in the game a few weeks after release, and, let’s face it, all of us Warhammer players were eager for the return of the older factions.

I think Mortal Empires will be magnificent, eventually. At present, a couple of things make it feel like it came out short of a few playtests. 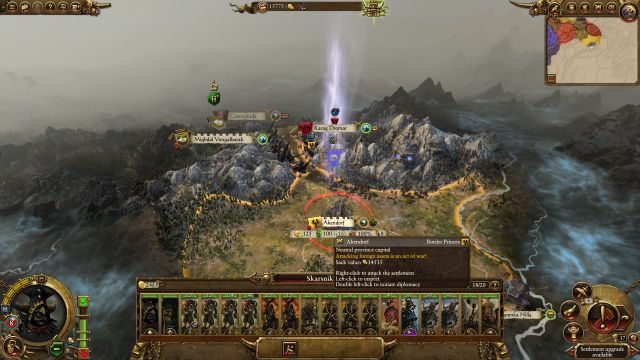 A passing visit to my good friends, the Border Princes.

The big one, which everybody who has got far enough into a new game will have noticed, is the never ending stream of laser-focused Chaos invasions. Mortal Empires retains the idea of Chaos incursions into the world from Total War: Warhammer, but marries it (accidentally, I have to assume) to the hyper aggressive, player-hunting AI from the latter stages of the Total War: Warhammer 2 Vortex campaign.

50-odd turns in, 12-15 Chaos stacks might start beelining for you. Judicious use of army blocking, ambush stance, and smart battle tactics may well win the day against this initial wave. It’ll feel exhausting, but rewarding too. Then, a few turns later, another 15 stacks will show up and zoom directly at you, slowly sapping your will to live. The numbers aren’t necessarily the problem here (Chaos as an overwhelming force feels pretty sound), but the forever-spawning from thin air, combined with a single minded intent to ruin the player’s day, need a serious look.

Until Creative Assembly sort out some kind of fix, you have a couple of mod options to temper the Chaos storm. This one suggests (I haven’t tried it yet) it will sort out the AI, so the various strands of Chaos will actually invade the world, rather than ignoring every other faction besides your own. Another option is this mod, which just pushes the Chaos invasions back to turn 998 (effectively removing them entirely).

The first solution seems preferable to me, and is hopefully how Chaos will eventually function in Mortal Empires. 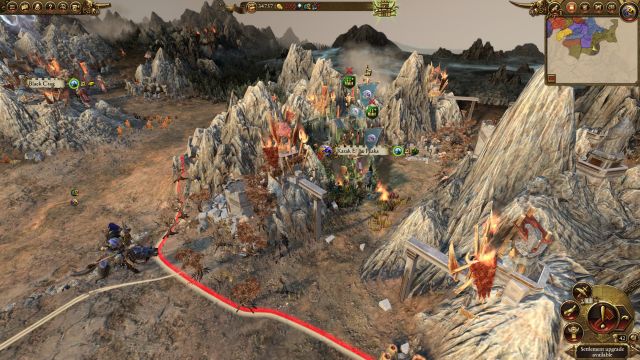 The next issue of significance is entirely related to time. When the Norsca DLC was released for the first Total War: Warhammer, it came with a free update which overhauled some of the less impressive Old World Lords, altered their skill trees, and gave them new sets of starting units. Due to overlapping periods of development in different teams, new-Norsca didn’t make it into Total War: Warhammer 2 or Mortal Empires. Nor did the Lords update, which means Mortal Empires is currently a (pretty major) patch behind the original Warhammer game.

Parallel development is a perfectly reasonable explanation for this, and ‘reuniting’ with proto-Norsca’s armies of marauder horsemen and chariots is an amusing enough novelty (their returning ability to conquer everywhere is proving awkward though). Losing the updated Old World Lords, though, is harder to take. Especially when half the fun of Mortal Empires is taking some of the original factions for a spin in the New World. Part of the reason I opted for Skarsnik is that he didn’t change much (possibly at all?) in the big Old World patch.

It would have caused great consternation, but perhaps Creative Assembly should have chosen to delay Mortal Empires until it could be released with the latest versions of the Old World Lords. Alternatively, release it as a literal opt-in beta on Steam, with the caveat that the other stuff will arrive for a full launch. 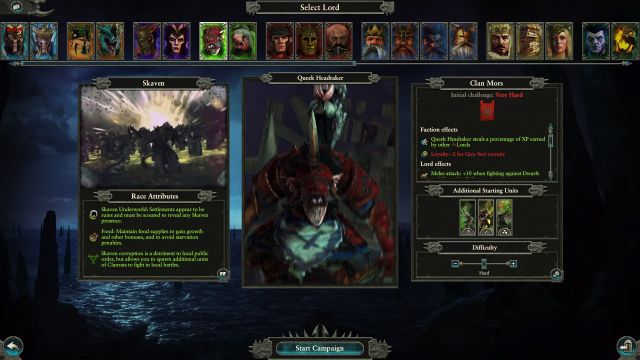 Queek’s in the Old World now (great!), but you wouldn’t know it from this menu.

Mortal Empires itself is a fantastic project; something my younger Warhammer tabletop-playing self had dreamed about. Though the original factions are missing the recent Lord updates, they have all been tweaked and balanced to be in-line with the new Total War: Warhammer 2 races. I’d need much more extensive time playing to be sure, but so far that balancing looks pretty encouraging. That’s no minor effort. Bringing Queek and Skavenblight into the Old World is a great move, and the new landmark buildings for every important location show loads of attention has gone into many parts of this release.

But while Queek is now involved in the race for Karak Eight Peaks, his AI (at least in my current campaign) doesn’t seem all that interested in going for it. That’s possibly because there’s a party of two full stacks and a WAAAGH who sit on the location (which also has a massive garrison) in perpetuity. I’m not sure if that’s supposed to be the case. And there are other minor disappointments too, like the new faction selection UI that doesn’t show starting locations with anything close to the same clarity as before.

I’m optimistic that a patch (or an interim hotfix) will be able to clear up the biggest grievances with Mortal Empires, but that doesn’t negate the feeling that this particular update was a bit rushed out. That’s something Creative Assembly had previously managed to avoid with the Warhammer series, and a pressure I hope they can resist again in future.

Update 3 November: A new beta hotfix patch is available that addresses the nature of the Chaos Invasions.

By Tim McDonald22 hours ago
Features