The narrative pillars of setting, character and plot that try so heroically to hold up Spec Ops: The Line are – simply put – wonderful. Set in a Dubai that has been hit with an apocalyptic-level sandstorm, burying all but the tallest of the garish skyscrapers beneath a sea of fine golden dust, it tells the story of Delta Force Captain Martin Walker.

Colonel John Konrad, one of the US military’s most celebrated individuals, has gone missing and it’s up to Walker to try and separate the facts from the rumour and misinformation – Where has Konrad been? What really happened when the US military attempted to evacuate the people of Dubai? Who is leading the remaining refugees?

If the storyline sounds familiar, that’s because it’s based on Joseph Conrad’s Heart of Darkness (filmed as Apocalypse Now). All the way down to the swapping out of “Conrad” for “Konrad”. If you’ve seenApocalypse Now, the easiest way to think about it is that you’re playing the Martin Sheen role and you’re looking for Marlon Brando. 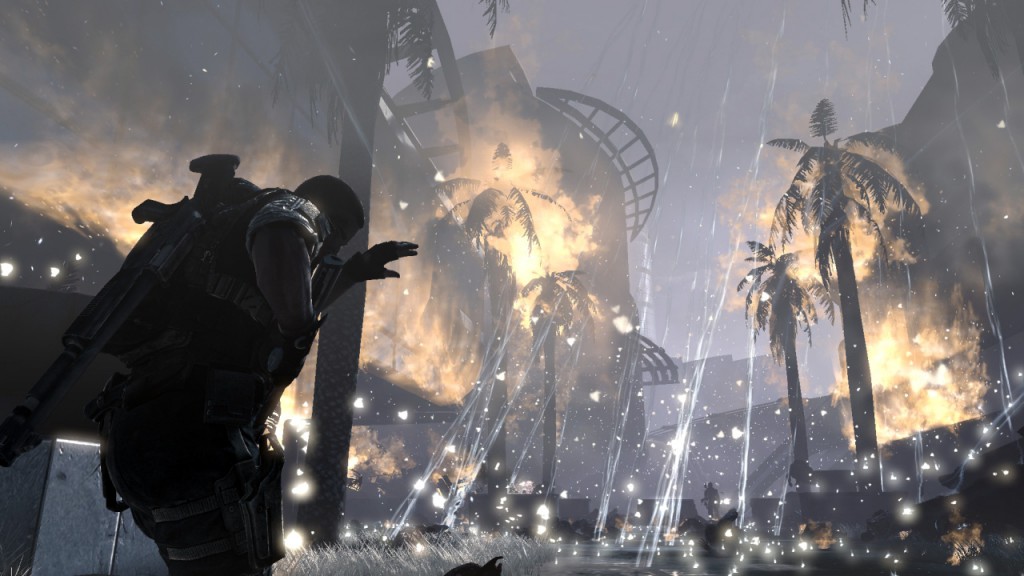 The narrative works, it’s a brave and surprisingly adult approach considering the kind of dumbed-down gibberish and recycled crap we’ve become accepting of when it comes to wannabe-blockbuster shooter franchises. It’s a shame then, that the gameplay doesn’t quite manage to embrace that same spirit of courage and maturity. Instead, Spec Ops: The Line too often relies on tried and tested formulas and scenarios in a disappointing attempt to not completely alienate those players desperately looking for their next generic fix.

Shootouts work in the same way as any other third-person, cover-based shooter you’ve ever played. You and your two “dude-bro” AI team-mates enter from one side of the area, the enemy from the other – cue switching between cover until you’ve killed everyone, or least killed enough of them to allow you to trigger a cut-scene that sends you onto your next shootout. While it’s unfair to claim that all of Spec Ops: The Line’s combat sequences play out in this way, it’s fair to suggest that 80-90 per cent of your time can be summed up as above.

What’s irritating is that the gameplay loop plays out exactly as intended, and provides just enough of a hook (despite its predictability) to keep you playing. That suggests a dev team that fully understands the ins and outs of making guns feel “beefy”, giving enemy AI the right level of intelligence and even knowing how to serve up an intuitive and working health system. The tragedy is that these core skills have been coupled with level design that is lacking much in the way of flair or originality.

And that’s a crying shame because, from a distance, the buried city of Dubai looks stunning. Up close, it looks like any other shooter.

All too often a cut-scene preceding a level depicts epic landscapes, engaging backdrops, and scenes of horror as the world of man has been violently and overwhelming reclaimed by the forces of nature.Dubai under sand is a brilliant, evocative idea as far as settings go, and one that (in theory) I would be eager and excited to experience.

Spec Ops: The Line wastes the opportunity, though. Levels feature the grand scale in the background but you, in the foreground, must be content with blasting around semi-collapsed floors of fancy hotels, ruined outdoor courtyards and the odd duck ‘n’ dive down a road littered with long out of commission cars, buses and tanks. It’s a crying shame and one that’s impossible to put out of your mind given that panning your camera across the skyline provides constant reminder of what could have been.

A bit of spice and variety is attempted with the inclusion of a few stealth sections and innumerable turret showdowns. However, try as they might, the stealth portions never go beyond the fact that they’re simply a means of preventing you from burning out on the constant shooting. And turret handling is nothing you’ve not played before. In many, many games.

So, in terms of originality, the gameplay is lacking. However, as I’ve already said, because of its technical proficiency, it does works and does provide a degree of satisfaction as a result. For what it’s worth, Spec Ops: The Line is more or less the equal of almost every other game on the market trying to do a similar thing.

That wouldn’t usually sound like the kind of comment associated with a game that I would recommend you actually play, but Spec Ops: The Line is worth the effort if you need a reminder that big, brash games can still be capable of telling a decent story. Basing yourself on something like Heart of Darkness is always going to be a good start, but Spec Ops: The Line does as good a job with the source material as one could expect from this genre.

Aside from the two morons accompanying you, characters are genuinely interesting and intriguing. You want to find out things about them, to learn what drives them and which events of their past has led them to this moment. That’s helped by conversation dialogue that refuses to devolve into the kind of meaningless crap that Call of Duty has been sprouting for years, instead attempting to go that extra layer and seek out meanings rather than just answers.

Of course, that doesn’t apply to the two dimwits on your squad; their dialogue sounds like it was written by someone desperate to land a job on Modern Warfare 4.

It’s also important to remember that I’m praising Spec Ops: The Line’s story in relation to other stories told by the look-how-big-my-gun-is military shooter. Make no mistake, this is not a story that can stand toe-to-toe with  Portal 2, Deus Ex, Bioshock or the early Silent Hill games (yes, those were great), but it’s far, far beyond what we reasonably expect from this genre nowadays.

Tales of Monkey Island, Sam and Max games – currently 60% off!