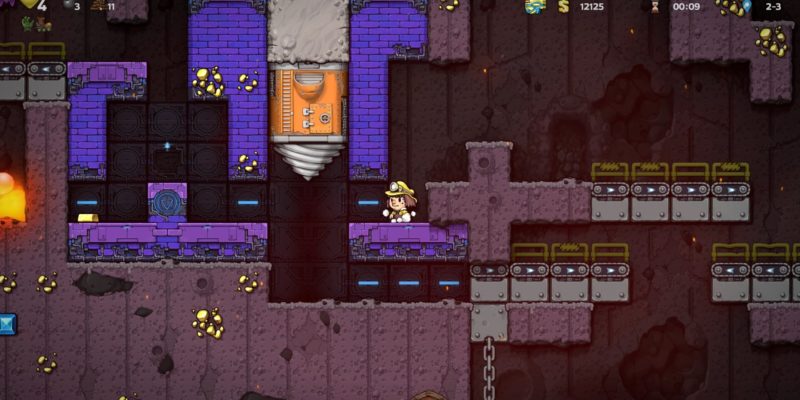 If you’ve had the opportunity to explore the lava level in Spelunky 2 you’ve probably noticed the unusual industrial drill in it. It’s located between floors 2-2 and 2-4 in a large blue-tiled area. You can whip it and bomb it, but nothing seems to work. However, there is a strategy to activate the lava drill and unlock a whole new level to explore.

In order to trigger the lava drill, you’re going to need to collect a couple of things. First and foremost, you need to begin your run from the very start of 1-1. Shortcuts can’t be used here, as the item we need only spawns on either 1-2 or 1-3. This means you’ll have to make your way from 1-1 to the depths of world 2 in a single life.

The first item we need is the Golden Key. As previously mentioned, this key only spawns on worlds 1-2 and 1-3 and can usually be found as a regular drop on either level. Sometimes it will be hiding in a crate or be tucked away in a hard to reach area. So, be sure to hit every crate you see and save some bombs to be safe. 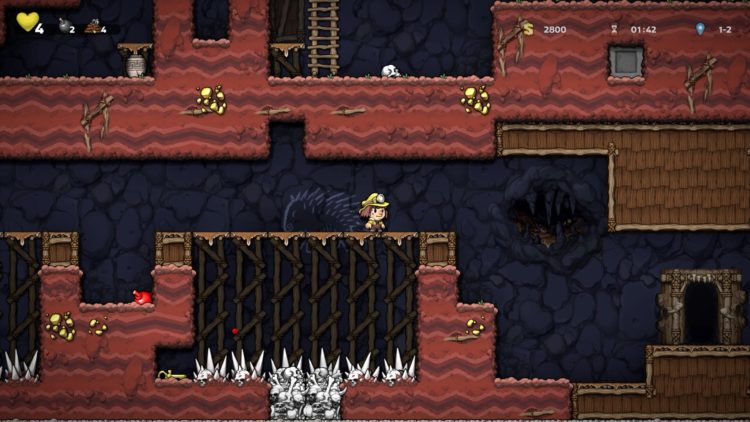 The golden key has a bad habit of putting itself in some very annoying positions. Be sure to have both bombs and rope on hand just in case.

Once you’ve found the Golden Key, you now need to locate a cave entrance that will spawn on the same level you found the key. If you find the right one, you’ll enter a room with two ladders leading up to a central chest. Simply take your key to the chest and it’ll open, revealing the Udjat Eye.

The Udjat Eye is a passive power-up that lets you see hidden gems and items through walls. It does serve a secondary purpose though, and that’s to power-up the lava drill. Once you have the Udjat Eye, work your way through the rest of world one.

Using the lava drill in Spelunky 2

The drill we’re looking for follows a fixed set of spawning criteria in Spelunky 2, which makes finding it fairly easy. It will never spawn on world 2-1 but always has a chance to spawn on 2-2, 2-3, or 2-4. Also, it only ever appears near the top of a level, so be sure to scout left and right when you spawn in before proceeding downward.

Once you’ve found the drill, head over to the central command area. It’s most distinguishing feature is a small, blue block with a triangle pattern marked onto it. Jump onto this block and you should be prompted to press a button. This prompt will not appear unless you possess the Udjat Eye. 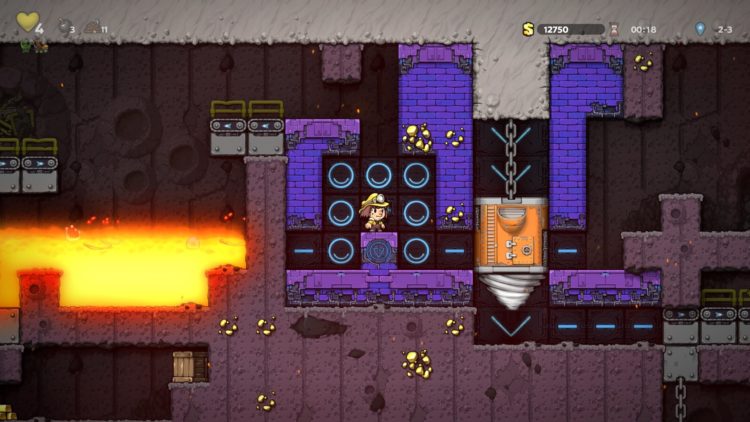 Stand here, activate the drill, and watch it tear through everything in its way.

Once triggered, the drill will immediately accelerate downward and destroy everything in its path. And when I say everything, I mean everything. Bricks, stone, lava, and even shops will be cut through until it reaches the very core of the volcano. If it does hit a shop, this counts as vandalism, so keep an eye out for any angry shotgun wielding shopkeepers.

Follow the drill down to the depths of the volcano, and you’ll find that a previously locked-away passage is now open. At the bottom left or right will be some bright red bricks. Enter through the door and you’ll discover one of Spelunky 2‘s many hidden levels.

Welcome to the realm of vampires. After climbing up a small passage you’ll find yourself in Vlad’s castle. There are quite a few things here that you’ll want to do. First things first, be sure to check both sides of the castle. Either on the right or left will be two guaranteed helping hands. If this is your first time in the castle, you can also unlock a new character by hitting both caskets.

Once you have your allies, head up to the top of the castle. Here you’ll come across a statue with a crown on it. The moment you approach Vlad the vampire lord, he’ll commence combat. The Vlad fight in Spelunky 2 is a little irritating, and the last thing you want is to die and have to reactivate the drill again. 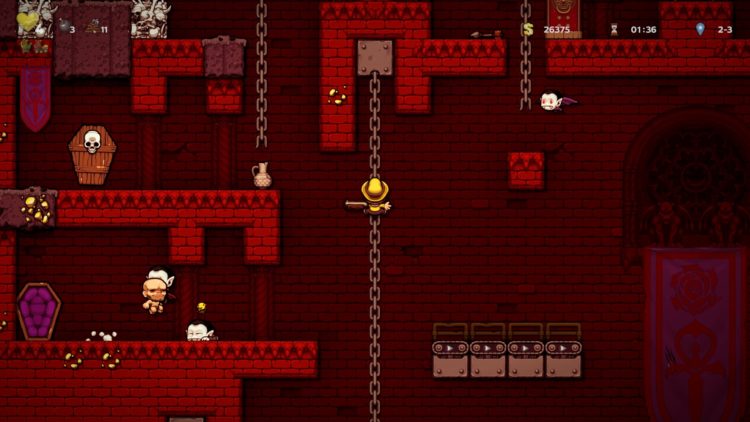 The free helping hands make this a lot easier than it would otherwise be, since they effectively take the fight on your behalf.

Vlad’s main attack is a teleport move in which he has a chance of landing inside of the player. If this happens, you will take a lot of damage and most likely die. The main strategy to avoid this is to run back down into the center of the castle as soon as Vlad awakens.

What will most likely happen is either your helping hands will kill him or poor Vlad will teleport into a nearby wall and disintegrate. Alternatively, if you do want to go head-to-head with the vampire lord, either a bow or shotgun will help out tremendously. The shotgun can stun Vlad allowing you to land free hits. Meanwhile, the bow can two-shot Vlad giving him little time to teleport in the first place. 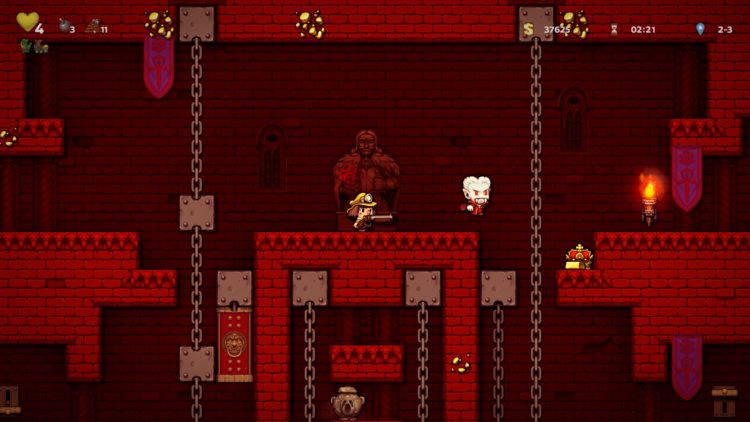 If you want to fight Vlad normally, a ranged weapon helps out a lot. Sticking close to him widely negates his teleportation too since he will always teleport at least four tiles. Standing next to a wall can help too, as he can accidentally teleport into the wall and instantly die.

Once he has fallen, you can claim your prize. Vlad himself drops Vlad’s Cape, a unique item that lets you land on spikes safely and doubles blood drops from enemies. This latter ability is great when combined with the Kapala, which is a healing item that collects your enemy’s blood.

On top of that, you can now claim the crown. The crown isn’t that useful on its own but can be used to unlock something incredible. By taking the crown down to level 4-2, you can find a sword wedged in a stone block. The crown allows you to pull the sword out and claim Excalibur. This signature sword can 1-hit KO just about every enemy in Spelunky 2.