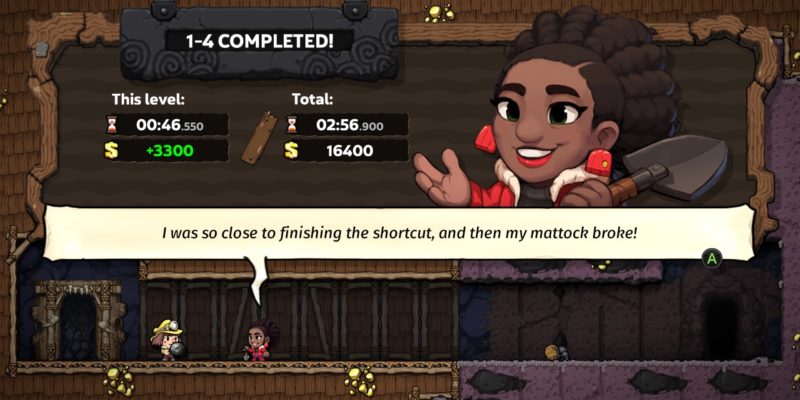 Spelunky 2 is a brutally difficult game. Making your way all the way from 1-1 to level 6 is hard. In fact, there’s even an achievement on Steam for doing so — something of which only a handful of players have unlocked. Since you start over again every time you die, there’s little room for error. Finishing the whole game in one run requires some serious skills. Thankfully, developer Mossmouth has provided some much-needed shortcuts to make your journey far less stressful.

There are three shortcuts that can be unlocked in Spelunky 2. These shortcuts allow you to permanently unlock later levels. In other words, you can skip the earlier levels every time rather than starting from the beginning.

The shortcuts in Spelunky 2 unlock three different levels from which to start each run. These are 1-4, 2-4, and 4-4. Given that there are only six core levels in Spelunky 2, not including side content, being able to skip all the way to world 4 can save a lot of time and effort.

How to unlock them

At the end of the aforementioned levels, you will come across Mama Tunnel. She is a digging specialist who is willing to work on developing some shortcuts for you. However, she can’t do this without your help.

For each shortcut, she will demand three different items that can only be delivered one at a time. This means that you need to finish the corresponding world at least three times before unlocking a shortcut. These items vary in difficulty with later requests requiring both focus and luck to complete.

The first shortcut unlocks two different areas to explore. You can pick either Jungle or Volcano, but the method of unlocking said shortcut remains the same. Mama Tunnel will request the following items on subsequent visits:

You’ll likely complete the first two requests by accident. It’s hard  not to have at least 2000 gold by the end of world 1. Just be sure to not overspend in shops early on, although you can just gather the necessary funds on world 1-4 alone. As for the bomb, just keep one on hand or purchase a bomb set from a nearby shop if you get the chance.

The 10,000 gold requirement is a little trickier, and may require some basic money-gathering knowledge. At this point, just focus on looting any gems you find and breaking crates for large sums of money. If you avoid spending money unnecessarily, you should easily have enough by the end of 1-4. If you’re a little short, consider using bombs on sparkling gems found inside floor tiles for some quick cash. 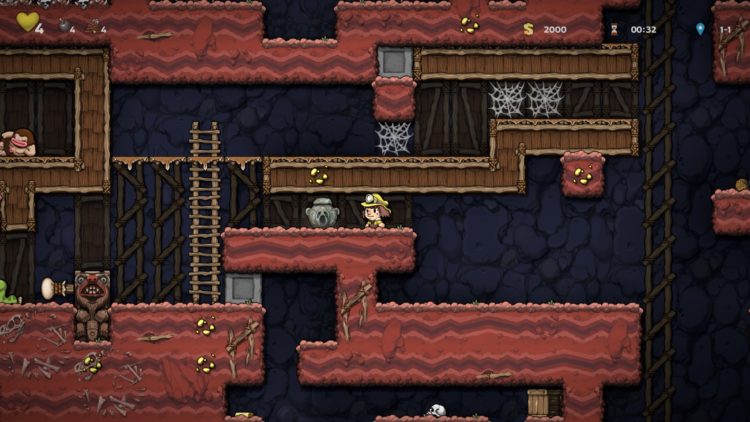 A quick tip for earning fast money: If you find one of these urns, don’t smash it straight away. Instead, carry it to the end of the level and then break it. This way you can avoid the ghost it spawns whilst still claiming the coins for it.

This set is a little trickier than the first as it’s going to require some searching. Just like the first shortcut, you’ll need to get to the end of 2-4 on three separate occasions to complete all Mama Tunnel’s requests.

Similarly to the bomb needed for the 1-4 shortcut, the rope is self-explanatory. Just make sure you have a spare rope on hand the first time you finish world 2. Once again, keep an eye out for any shops just in case you need to buy extra.

Delivering a weapon to Mama Tunnel is a little more difficult. There are effectively two different ways to acquire weapons easily. First, you can simply buy a weapon from most shops. Some of them can be expensive, but the likes of the Boomerang, Camera, and Machete are easy enough to purchase. Currently, Hou Yi’s Bow found in the Moon Challenge does not work, so don’t rely on that to complete your shortcut. 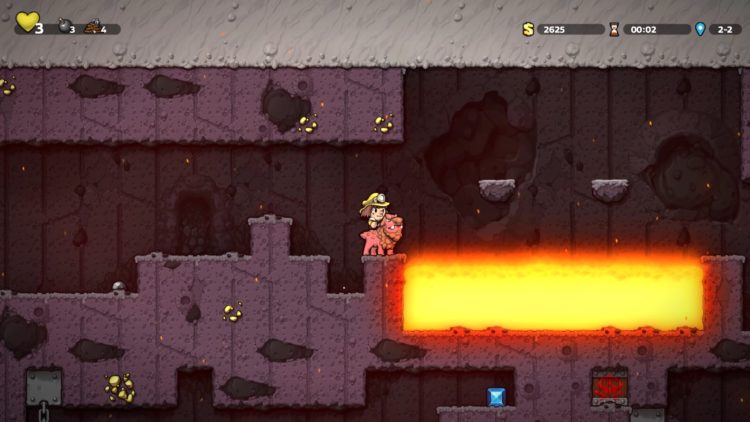 Alternatively, the Jungle has many common enemies — all of which drop the Boomerang. Even though I’d argue that the Jungle is harder to complete than the Volcano, it does make acquiring a weapon very easy. Just pick up one of their Boomerangs, take it to the end of 2-4 and hand it to Mama Tunnel.

On paper, delivering a mount seems rather irritating, but it’s fairly straightforward. On the Volcano level, turkeys and rock dogs can be found, both of which count as mounts. When you come across one, jump on it and wait a few seconds to tame it. Be aware that when you first jump on you will lose control and the mount may enter a dangerous area.

Then take your new mount to the end of 2-4 but do not engage the boss as normal. Instead, place several bombs on the far left of the room to break through the floor. Once done, simply run to the far right of the lower room and hand you mount into Mama Tunnel.

Unlocking the final shortcut is significantly more difficult than the other two. Once again, there are three items to hand in that must all be done separately. But they’re a lot harder to find than a single bomb or weapon.

Unlike the 10,000 coins needed for the first shortcut, it’s very possible to finish 4-4 without the necessary funds. It’s especially true if you power through the level and avoid looting. As before, you’ll want to grab any loose gems found throughout each level. However, that alone probably won’t be enough this time if you’re starting from the last shortcut.

Instead, a little bit of ingenuity may be required. From my tests, delivering either two diamond gems or a single Idol will usually suffice. In this world, Idols can be found in clam traps that slam shut when you step on them for too long. Despite this, you do have time to jump on the clam, grab the Idol, and get off in time. If you don’t fancy the risk, bombs can be used to knock the Idol off of the trap. Once acquired, deliver it to the end of the level for a bountiful of coins. 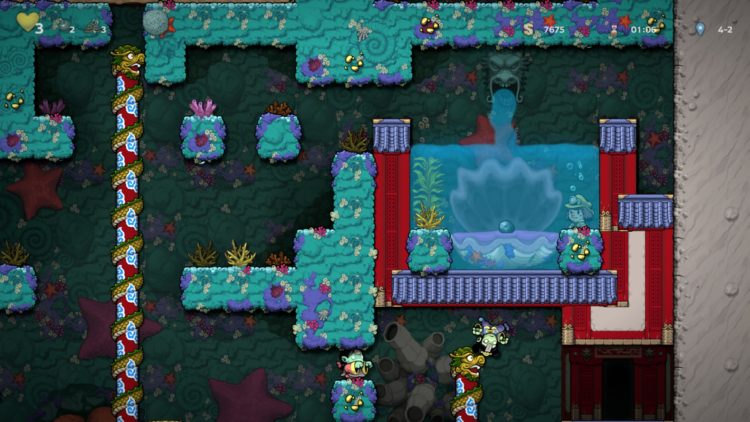 Clam traps don’t always spawn something useful. Don’t throw away your life for something easy to find like a rock or low-tier gem.

The hired hand is a stressful delivery. These are NPCs that help you out in Spelunky 2. They can take hits for you, kill enemies, or even bait out traps. While they’re decent at this, they don’t tend to stay alive very long. Considering you will likely have to carry your hired hand from world 1 all of the way to the end of world 4, this is problematic. 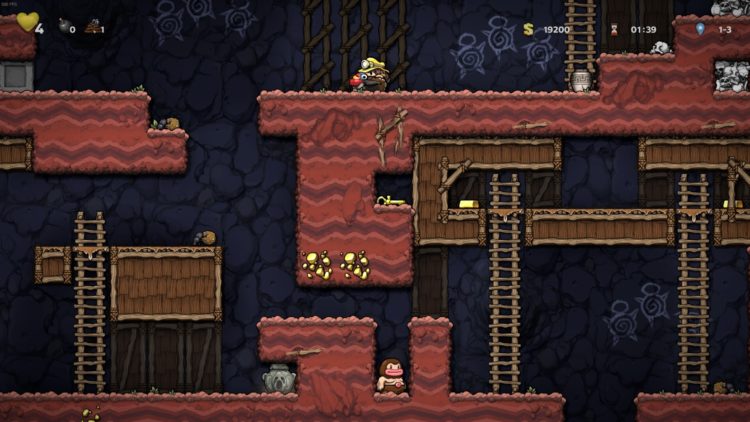 The Golden Key won’t always spawn in the most ideal of places.

The Golden Key is always found on either World 1-2 or 1-3. It will either just be lying around as regular loot or hidden in a crate. Just search around and hit any crates you find and you should come across it soon enough. However, that’s about where the easy part ends.

You now have to take this key from the middle of World 1 to the end of World 4 without dying. Since you are holding the key the whole time, you can’t reliably use most other items. In saying that, passive items like the Spike Boots and Cape can help so be sure to buy them if you get the chance. Good luck because this final shortcut request is the hardest yet and will require both luck and some serious Spelunky skills.

Interested in playing Spelunky 2 but not sure if it’s worth the investment? Check out our detailed review of Mossmouth’s latest title.