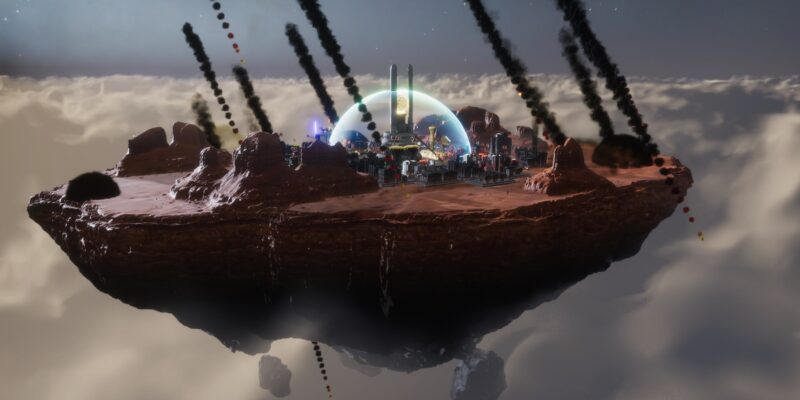 The city-building genre has remained extraordinarily popular for a very long time, and not without good reason. Although the resource management aspect of these games can contribute to a great deal of stress, it also leads to a sense of accomplishment upon finally finishing a successful and stable city. At least for the games that do not push in-app purchases. Dedicated fans of this genre will soon get yet another chance to experience this enticing gameplay loop, as publisher Assemble Entertainment just announced a new sci-fi city-building game called Sphere – Flying Cities. Assemble Entertainment put out the game’s first trailer to coincide with the announcement.

The trailer showcases the game’s impressively detailed sci-fi cityscapes in a dramatic fashion. Sphere – Flying Cities’ core concept involves building and maintaining a city on a rocky platform suspended high in the air. Although the concept seems fairly similar to last year’s Airborne Kingdom, the trailer did not feature the overworld exploration elements that made that game so unique. Of course, the trailer still managed to show off some interesting gameplay mechanics, such as meteor showers that players need to protect their city against.

One last hope for humanity

According to a press release, Sphere – Flying Cities features a post-apocalyptic world in which a large asteroid strikes Earth’s moon and severely damages the planet’s ecosystem. This catastrophic event forces the remaining humans to relocate on a faction of flying cities, made possible through the use of anti-gravity technology. Players take the role of commander as they “rebuild, restructure, and protect the last of society in an uninhabitable environment” as well as “navigate the upper atmosphere and the daunting unknown.”

Assemble Entertainment announced that Sphere – Flying Cities will arrive on Steam Early Access sometime this fall, so city-building enthusiasts only have to wait a few months before they get to try the game out.

Netflix plans to add games to the service, aiming at mobile ‘for now’

You can soon drive a Ferrari 296 GTB around in Fortnite