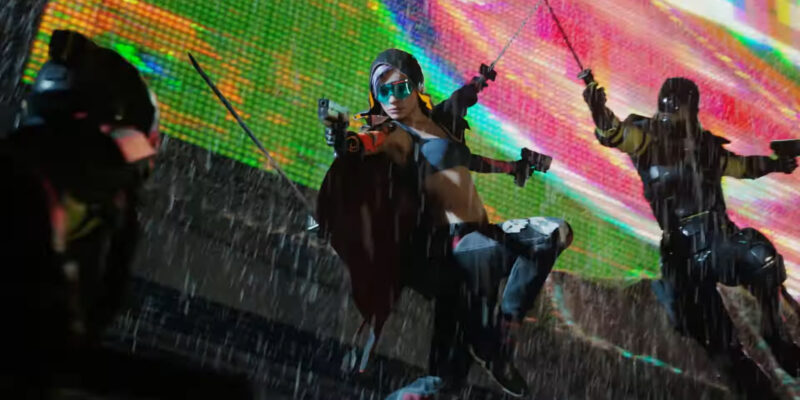 Developer Banzai Games and publisher Nekki have just released an official reveal trailer for Spine, and it’s completely cinematic. So, don’t expect any insight into what the gameplay will be like. However, the game looks like fast-paced ability-fuel, and I cannot wait to see more.

Spine is set in a cyberpunk world and will have you battling in a team of three against another team of three. Although, that could change because we know so little about the game right now. The Steam page makes it sound like there will be a single-player element too. We’ve only seen two characters so far. However, it’s safe to assume there will be a roster of characters to choose from and an arsenal of melee and ranged weapons.

The YouTube description of the Spine reveal trailer tells us that the heroes in the game are empowered by implant technology. That could be what the yellow things embedded in the backs of the characters in the trailer are. That would also explain the name of the game.

In Spine, you’ll be able to perform martial arts-inspired tricks while wielding melee weapons and guns in a fighting style called Gun Fu. I imagine the gameplay will be similar to Naraka: Bladepoint, but with a futuristic spin instead of ancient Chinese mystics.

The game was first announced back in 2020 with a teaser trailer. You can check it out, but it shows off even less than the new trailer. Although, the man (or machine?) in the teaser appears to be the same one from the new trailer.

I can’t wait to see a gameplay trailer with some combat footage from Spine. The publisher says it will be an immersive, cinematographic experience. I don’t even know how to picture that, but I’m excited. The woman in the latest trailer has illusions, two extra arms, and she looks like she can track people. I can’t wait to see what tricks the other characters will be able to perform.

Spine will be available on PC through Steam. You can wishlist it now, but no release date has been set. It will also be coming to console and mobile.

Conquer and rule in Pathfinder: Kingmaker for free this weekend