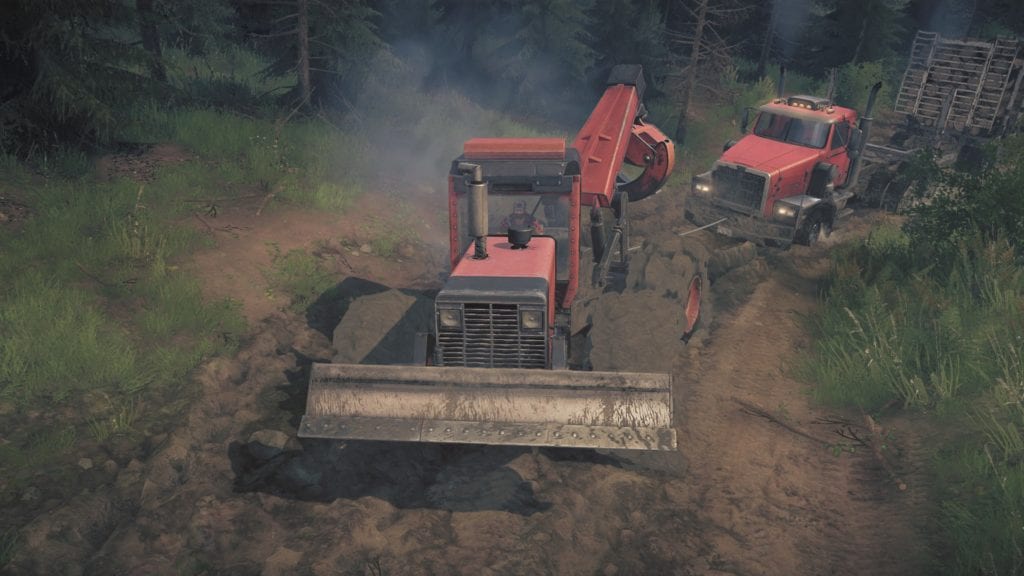 Video games have been around for a little over three decades at this point. Taking a look back at the earliest eras in comparison to now, it’s amazing how far technology has progressed in such a relatively short period of time. What was considered “cutting-edge” just 15-20 years ago is laughable at this point, as new titles continuously push for over-the-top cinematic elements and photo-realistic visuals.

We’re now getting into the tail end of the eighth-generation, and the complexity of today’s video games compared to even the conclusion of the seventh-generation shows a relatively noticeable jump in quality. But, as AAA gaming budgets get ever so more ludicrous due to gamers expecting (and demanding) more and more from developers, there are still studios out there which have a more laid-back approach, the majority of which are indies.

Spintires started off as an indie project but has grown into being a relatively complex title. Even so, it’s still a far cry from any AAA project out there. Yet it still achieves so much, despite its relatively small scale.

I recently returned to the ‘sequel’, MudRunner, due to the release of its American Wilds expansion (which I reviewed here on PC Invasion). Prior to this, I hadn’t touched Spintires in quite a few months, nearly pushing a year. Jumping back into the virtual backwoods behind the wheel of massive off-road monsters for the sole purpose of hauling logs has been a very liberating experience. Despite Spintires relatively being very frustrating (in a ‘good’ way?), I’ve still found just as much enjoyment with the new content as I did when MudRunner launched back in October 2017.

While so many other gamers are currently riding on horseback through an immensely complex virtual rendition of the Wild West, I’m still here pretending to take in the scent of the “great outdoors” mixed with diesel fumes while hauling logs around. Yet, I love it. On top of that, Spintires has gained a pretty reasonable following since it first came onto the scene. Spintires: MudRunner is as slow of a game as they come. Yet I find it as exciting as the usual AAA-action game.

Cruising in the Slow Lane

It’s smaller (yet still very ambitious) projects like this which go to show that developers don’t have to spend nearly a decade creating a game and backing it with a multi-billion dollar budget in order for people to love it. Of course, those sort of AAA experiences have earned a spot in the industry. Heck, those are usually the ones pushing the whole medium forward. But smaller experiences like Spintires MudRunner, among so many others, still provide a decent alternative.

There’s no Hollywood-like dialogue in MudRunner — in fact, there’s no dialogue at all, because there isn’t even any real story. A few text boxes present your objective to you, and that’s about it. The game leaves the rest up to you. There’s no AI roaming around the world either; it’s just you, your truck, and the environment. The maps are open and fairly sprawling, but they’re not filled with any amazing set pieces or interactive elements. It’s just a big swath of mud, dirt, rivers, swamps, and forests. On paper, that sounds pretty boring and far less impressive than the likes of most of the aforementioned AAA titles. But I absolutely appreciate MudRunner regardless. The phrase “a little goes a long way” really does apply here.

Games like MudRunner gain a pretty sizeable following due to quite a few gamers still finding hours upon hours of enjoyment in these more laidback experiences. Many people casually see gaming as only being the big, flashy titles that make it out into the mainstream. But as large as those games might be, they do not represent the entire industry. Spintires: MudRunner truly fits the bill of being a ‘sleeper hit’ of sorts due to it being the exact opposite of AAA titles.

Not only is it a fairly empty game, but it’s incredibly slow and not at all engaging unless you’re really into this type of experience. Its nature might bore many or or flat-out turn them off, but that’s what makes MudRunner special. I’m hoping that these sort of games never go away. It’s nice to be able to just sit down and enjoy something that’s this laid back. That’s why my game of the year is the upcoming Farming Simulator 19.

Yes, I’m very serious about that.

By Martynas Klimas3 days ago
Opinion