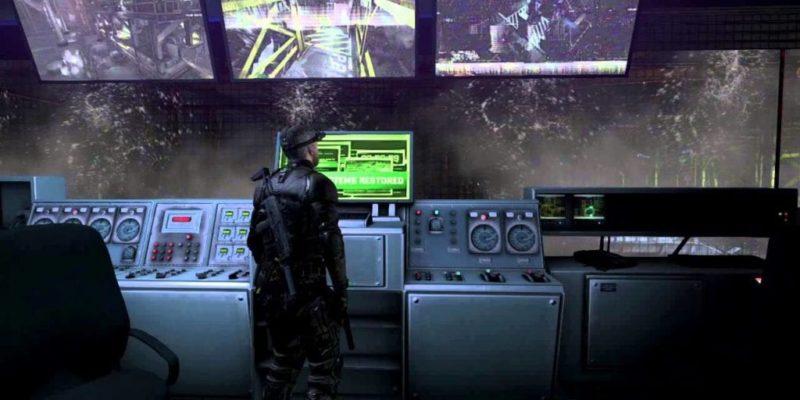 Alas, it looks like Michael Ironside won’t be returning to Splinter Cell: Blacklist. But don’t worry! I’ll keep complaining about this every time I write some news about it for the foreseeable future. And possibly when the inevitable sequel is announced, too.

Still, this gameplay video – showing six minutes of footage from a level a bit later in the game – does show off the sort of stealthy antics you can expect. And also non-stealthy antics. Hm.

It’s set on a natural gas facility suffering a Blacklist attack; the fire suppression systems have been shut off by a virus, and a tanker has been rammed into it. Cue lots of fire and explosions while Sam heads in to try to re-enable the fire suppression, shut off the flow of gas, and capture the attack’s leader.

There are some neat little tricks in the video – heavy infantry are well-armoured and pretty much have to be taken out via stealth and sneaky tactics, like using a stickycam to attract attention, releasing sleeping gas, then shooting off their gas mask/helmet. On the other hand, there are also continual pop-ups of +100 SILENT KILL and +100 EXPLORATION, and a very high-profile, Assassin’s Creed-esque chase scene towards the end, with Sam charging after someone while people shoot at him. Hm.

Check out the video for yourselves below, assuming you can see it through the haze of tears inevitably caused by the very first sentence in this news story. The game itself is out on 20 August in America, and 23 August in Europe.

Titanfall pre-orders will be $60 USD, even on PC