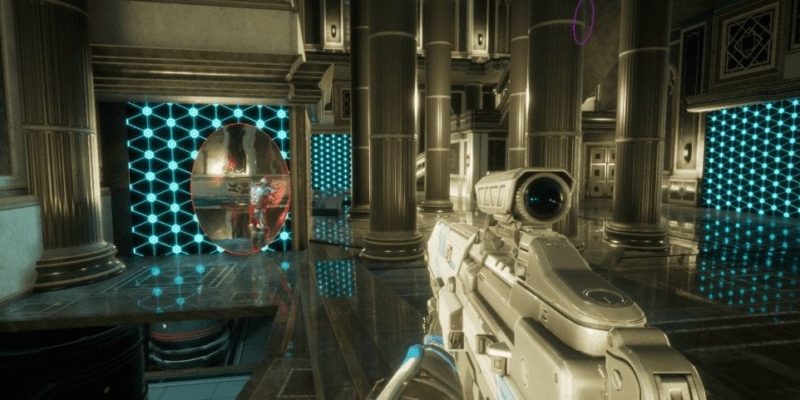 Splitgate: Arena Warfare, from 1047 Games, is a fast-paced, online multiplayer, first-person shooter which has you trying to get as many trick shots as you can. This weekend it is open to all for playtesting, and for a good reason!

While Splitgate is currently in its early alpha days, you can still join up to 9 of your friends (or some strangers) to battle it out in the game’s arenas. There are a plethora of guns and even some portals to make things more interesting.

These portals provide both a challenge and an opportunity for some killer trick shots – shooting people through the portals or using them to gain momentum and get to new areas. You can seamlessly shoot out your portal, the same as shooting your gun, before running straight through it. Before you take on some real-life players, you can master your skills against a bunch of highly trained robots. Then you can take on the neon areas full of real humans.

Splitgate: Arena Warfare has various playtesting weekends. You can keep up with each of them by joining their Discord. But this weekend, from 12:00 PM Pacific Time on Saturday to 12:00 AM Pacific Time on Sunday, is extra special. For this playtesting event, the developers are looking for players with the skills to make some impressive shots.

During this weekend, for every player that makes an impressive shot — a headshot or shooting through a portal and hitting someone, for example — the developers will donate money to charity. They have selected the Joint Forces Initiative as the charity, through their Pro vs Gi Joe program. This charity aims to put pro athletes into video game contests against deployed U.S. Military members.

You can get your free alpha key for Steam by joining their Discord and following the instructions on their website. Why not spend your weekend honing in your own kills, and all for a very good cause?

Watch: Phantom Doctrine’s ‘debriefing’ trailer shows gameplay and covers all of the features