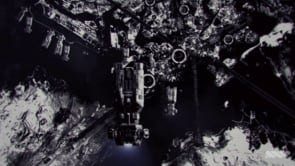 London based Design and Direction studio Spov have announced that they have completed the opening movie for 2014’s most eagerly anticipated game for the Xbox One, Titanfall.

Spov worked closely with Titanfall developer, Respawn and publisher EA to develop a cinematic sequence introducing the narrative setting to players when they first load the game.

This cinematic sequence details humankind’s escape to the stars, using archive footage of space travel, before utilizing Spov’s CG and animation skills to visualize Titanfall’s game world – one where ships and people have traveled to the farthest reaches of the universe.

Influenced by footage from NASA’s Cassini mission to Saturn, the sequence blends the stark and minimal realism of space with the preparation of the massive Titan mechs for their planet fall.