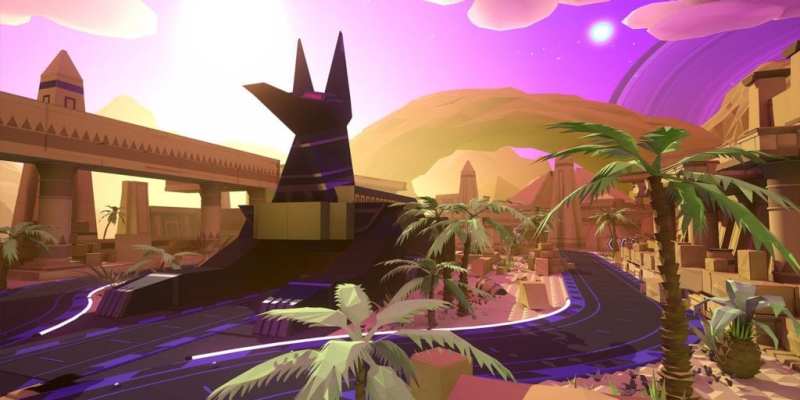 Survios helped turn the perception of VR games from being a bit rubbish to quite decent with their excellent shooter Raw Data and now they are back with a new VR release. Enter Sprint Vector, a racing game that’s not your typical racer.

Sprint Vector puts the players at the heart of the action as futuristic runners that have to complete courses against AI or other players while waving their arms around a lot. This game will give your arms a severe workout because it’s not possible to sprint with your legs in VR so it’s the arms that work as the means of locomotion. Players have to swing their arms as if they were running on the spot while utilising a button on the controller to trigger a stride. It sounds easy but it’s quite tricky to get it right and takes some practice.

Using the arms to run is a strange idea which is probably why there are quite in-depth tutorials included showing the various actions required to be a successful running racer. By raising and the arm above waist height with the trigger held down, and then releasing the trigger when it reaches the leg, players can propel themselves forwards. Once moving in what can best be described as a skating action, players then have to navigate the courses as best as possible in the fastest time while making use of the level design and power-ups.

At the start of the race players can choose from a variety of characters, all of which appear to be similar in stats so they are really just cosmetic as far as I can tell. This means that how well you perform is purely down to your own skill level and there’s no other factor in play. If you continue to lose then it’s down to your skills and nothing else. Practice makes perfect and finding a good arm movement rhythm is key to a successful run to keep the momentum flowing. Sprint Vector is not just about the arm rhythm, movement direction is also affected by the tilting of the head and that takes some getting used to when making minor direction adjustments.

Mastering the movement and controls is the main battle and it takes a little time to get used to. I also found it a little disorienting to start, but if there is one thing Survios is great at, it’s making a VR experience as comfortable as possible with the current VR hardware limitations and that’s thanks to their Fluid Locomotion System. Moving at high speeds while standing stationary and waving your arms around, in theory, should have your motion sickness meter hitting max but with Sprint Vector that doesn’t seem to be the case. This was a huge and surprising plus but everyone responds differently to VR so it may still make some players feel a little queasy.

Sprint Vector comes with twelve tracks and nine challenges to help find your feet and once you have them mastered then it’s time to challenge other players online. Learning the courses is key because there are different routes players can take and to win you‘ll need to find the quickest, and easiest, way to the finish line. Using the arm momentum and mastering some of the tricks like gliding, climbing, and leaping is tricky which is one reason why you’ll keep coming back for more. Power-ups also play a role in your racing success and utilising them against your opponents at the right time can help you get the edge and hopefully a victory, but it does take some practice and good timing. Being aware of the environment and other players certainly helps.

Survious has done it again. They have managed to create a unique VR experience that is highly engaging, looks great in the Vive, and is incredibly exhilarating to play. The movement system is brilliantly executed offering a unique VR gaming experience that also doubles as solid workout. Be warned though because your arms will ache if you play long enough. Sprint Vector is a must-have game for any VR gaming enthusiast.

A solid arcade VR racer from the Survios team with a control system and movement mechanics that makes this VR title stand-out.

By Andrew Farrell14 hours ago
Tech