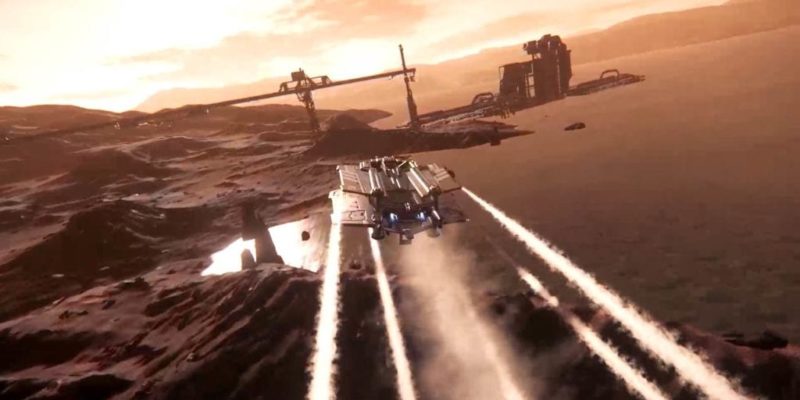 The enormous and anticipated update for Star Citizen has arrived today. With update 3.3.5, players now have access to the game’s first major planet, Hurston. Along with the planet comes the city of Lorville, a landing zone with commercial and residential areas to traverse and explore.

The patch has released ahead of the upcoming free week. Starting this Friday, you can download and play Star Citizen for no money down. The week should allow you plenty of time to take in the new sights.

Naturally, a week without a ship and just riding the rails around Lorville wouldn’t be exciting. So instead, developer Cloud Imperium Games is opening up its dockyard, allowing you to try out every ship in the game. Each day will feature a different ship manufacturer, and you’ll have 24 hours to test fly a vehicle — there will be more than 80 ships available to fly.

A Room With A Brew

Of course, a new planet to explore just isn’t quite enough for the update-happy developer. With 3.3.5 comes new places to visit and explore. Four new moons are coming in the update, each with outposts. There will also be seven additional rest stops, as well as clothing and armor decked out in the Hurston style. Plus, this is the update that you finaglers will love. Players can interact with many in-game items, such as the coffee machine in their Hab at Lorville. This caused quite a raucous applause during CitizenCon, which worried me greatly.

Lorville is a large city area and as such only has one legal area for landing and port entry. Space above residential and commercial areas are protected by a no-fly zone. Players will be warned when they are entering that zone via HUD warnings, visual indicators, and increasing audio alerts. If they continue into the zone, their ship will be destroyed. The city has a bar with an interactive bartender and a personal equipment shop (Tammany and Sons) that includes an early implementation of the multi-tool. To move around the city, there is a train style transit system and signs to help guide the way.

Patch 3.3.5 is now live for Star Citizen. Starting November 23, you’ll have a week to download and play the game for free. Check the patch notes for more information. See you among the stars.

Path Of Exile Fan Who Made Diablo 4 Website Gets In Legal Hot Water, Hilarity Ensues