A dissatisfied Star Citizen backer has managed to earn a full refund of $3,000 USD from Cloud Imperium Games, in a struggle dating back to mid-June. The backer, who goes by the name ‘Streetroller’ (their real name has not been shared), successfully received their refunded sum after filing a complaint with the District Attorney of Los Angeles.

Correspondence between Streetroller and Cloud Imperium Games (CIG), as well as letters between the California DA’s office and CIG’s legal counsel Ortwin Freyermuth, can be read here. They were originally posted on the SomethingAwful forums.

In the correspondence with CIG, Streetroller contends that he is entitled to a refund because Star Citizen “remains unfulfilled and no longer constitutes the product(s) I originally purchased”. That refund request is swiftly denied, with CIG citing their Terms of Service. Specifically, a passage which states: “For the avoidance of doubt, in consideration of [Roberts Space Industry’s] good faith efforts to develop, produce, and deliver the Game with the funds raised, you agree that any Pledge amounts applied against the Pledge Item Cost and the Game Cost shall be non-refundable regardless of whether or not RSI is able to complete and deliver the Game and/or the pledge items.”

Here’s where things get quite interesting. While that particular passage has been in the ToS since the beginning, Streetroller cites a different passage which potentially contradicts it. The passage Streetroller quotes was altered by CIG back in June. Streetroller says he never agreed to these ‘updated’ ToS.

That older passage, which can be seen here via ‘Wayback’ internet archiving, stated: “You agree that any unearned portion of your Pledge shall not be refundable until and unless RSI has failed to deliver the relevant pledge items and/or the Game to you within eighteen (18) months after the estimated delivery date.” The original estimated delivery date given on the Star Citizen Kickstarter was November 2014.

Streetroller also cites a Washington State case from July 2015 in which the Attorney General enforced fines on the Kickstarter project Asylum for failure to deliver to backers. The cases of Asylum and Star Citizen are not identical (Altius Management effectively went missing and stopped all communication with backers). However, the success of the Asylum case implied that crowdfunding backers are covered by the Consumer Protection Act.

Under that Act, if a consumer (Streetroller) agrees to a specific date of delivery (which would be May 2016 under the original ToS that he signed; eighteen months on from the November 2014 Kickstarter deadline), they are entitled to a refund when products are not delivered.

CIG disagree with this argument, and reject the refund request for a second time. At this point Streetroller files complaints with the DA of Los Angeles, Federal Trade Commission, and LA Department of Consumer and Business Affairs (DCBA). After that, things start to actually happen. 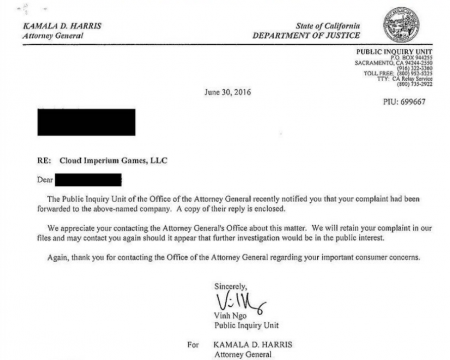 Streetroller receives an initial refund of $900 USD through Amazon Payments on 23 June. Then, on 29 June receives three official responses to his complaints. You can see the response to the complaint filed with the District Attorney on the page linked previously. It comes with correspondence from CIG’s Ortwin Freyermuth, who once again disputes Streetroller’s right to a refund on ToS grounds (claiming that “None of the revisions to our ToS have affected [the] complainant’s position”); before eventually agreeing to give him one anyway.

Two days later, on 1 July, Streetroller receives denials for his initial PayPal refund claims. However, on 12 July the rest of the unclaimed money ($1,660) arrives via PayPal refund. That totals $2,560, so either some of the refunds weren’t documented in Streetroller’s post, or they were rounding up to $3,000.

Whether the Star Citizen Terms of Service (either the first set or the revised set) would actually stand up to serious legal scrutiny, particularly when you get down to what constitutes an “earned” or “unearned” (the language used in the older ToS passage) pledge, is an open question while they remain untested. It’s probable (though can’t be stated with absolute certainty – I am not a lawyer) that legislation like the Consumer Protection Act, if applicable, would take precedence. In this instance though, CIG have opted not to push the matter further by simply agreeing to Streetroller’s refund request.

The story doesn’t quite end there, because on 11 July (one day before his PayPal refunds show up) Streetroller was contacted by an investigator from the LA Department of Consumer and Business Affairs. After an hour long discussion about Star Citizen, Streetroller says he was told to encourage others to file complaints against CIG with the DCBA.

What’s abundantly clear from this dispute is that it is still possible to extract quite sizeable Star Citizen refunds from CIG, providing you’re prepared to show serious intent by filing complaints with relevant US business and consumer bureaus.

Update: The first version of this article incorrectly gave the date of Streetroller’s PayPal refund as “24 hours” after receiving replies to his complaints to the DA et al. It has been updated to reflect the fact that he first received denial of the PayPal claims on 1 July, before receiving confirmation of a refund on 12 July. This was one day after being contacted by an investigator from the LA DCBA.

Update 15 July: We have interviewed Streetroller. You can listen to the discussion, or read an edited transcript.