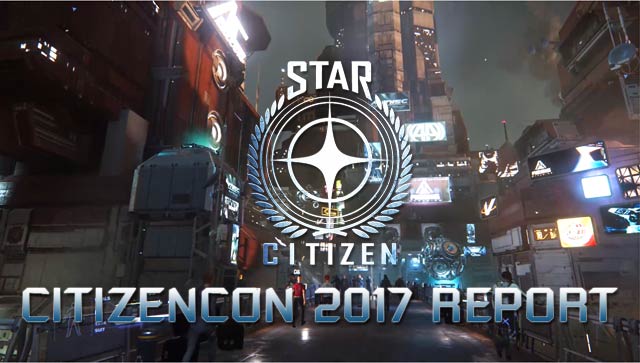 It was time for another Star Citizen CitizenCon today and most of the afternoon was spent talking to developers with a few panels to show what was being worked on. I’ll admit, I only tuned in for small chunks of the adternon sessions and eventually turned off when I spotted backers in the twitch channel getting excited about a character’s feet turning up dust on a planet’s surface with comments like “this is a game changer”. Well, it might be if Star Citizen was actually a released game.

In the past few months I have started to switch off when it comes to hearing about upcoming features for the game, you just never know what is or is not coming in the future.

Let’s skip ahead to the main event this evening. Chris Roberts hoovered onto the stage like a supersized Steve Jobs dressed in the regulation presentation black trousers and a long-sleeved t-shirt. To kick things off, Roberts recapped the afternoon’s panels and what was on show around the venue. There was 20 PCs setup with 3.0 running at the event and attendees did manage to get some hands-on time. 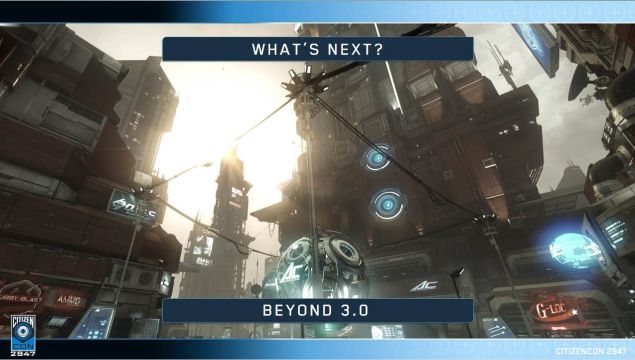 What fans wanted to know was what is coming after Star Citizen 3.0 even though 3.0 is still in testing with the Evocati testing group. Beyond 3.0, CIG will be switching to a date driven model instead of a content-driven model. The plan is to push out quarterly releases and there will be a roadmap of features and content releases to show what they are working on. Of course, these schedules don’t mean very much because even Roberts says that content that doesn’t make it into a release will be shifted into the next. This means that CIG can keep a release date for anything completely open. What they appear to be trying to get away from is long periods where there are no updates at all.

Roberts says they feel that “they have the bones in place” for the Star Citizen persistent universe with fully persistent, ships, characters, items, planetary systems, and all the other systems they have been working on in the past six months. There is apparently now a “building block” to add features to. This new full roadmap will be produced in the coming weeks detailing features and content they are working on. This will show what order they plan on getting new content out to the public.

The single player campaign Squadron 42 wasn’t on show this year but during the holiday livestream they plan on showing what they have been working on. They will also produce a roadmap for Squadron 42 which should make for some interesting reading because we all expected to have been playing that by now.

Chris moved on to show some of the features and content they have been working on beyond 3.0 via a video presentation. ArcCorp is the setting for the presentation as Chris tells everyone the version that has been available as part of the social module was “basically faked”. Now they want to show the real stuff with the new planetary tech. Now ArcCorp is bigger, it looks more like a real sci-fi city with no skybox and it does look very impressive. 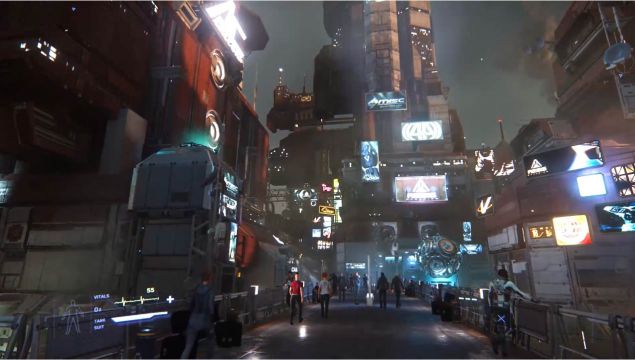 Moving through customs, the presentation moved towards an Aurora ship which was entered and activated. This was CIG’s opportunity to show that this was actually a planet where a ship could take off and move out into the world. As you’d expect, it looked great and the cityscapes are vast. However, again it’s not clear where you can actually go apart from the destination location picked out for these demos as it’s all carefully choreographed. It’s hard to get too excited until it’s actually shown working because the plan is to make these cities as real as possible with multiple landing zones.

After some flying around it was time to head into space to demonstrate the transition from planet surface through the atmosphere and then ibto space. It was a bit dull to watch which I guess is what it will be like in-game, spending plenty of time just flying around going from A to B. Once out of the atmosphere, the Aurora landed on an orbital space station. These types of location will start appearing beyond 3.0.

Leaving orbit completely by jumping out, the upgraded jump effects were shown which and it’s now quite a trippy experience. 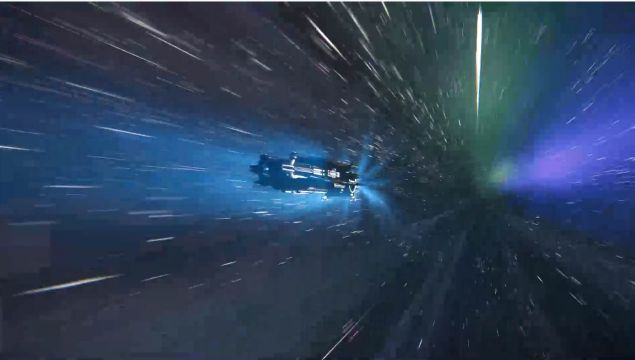 The demonstration moved onto explaining how they have pieced the ArcCorp city districts together with their tools. It looks very simple thanks to the custom tools they have created which takes a lot of the legwork away from the design team and artists. With so much content to fill, it;s easy to understand why these tools are necessary if CIG plan on creating these vast city locations.

It was time to head back to the Aurora which took 8 minutes to do its jump to the planet Hurston in the Stanton system. According to Chris, this is an early version of the industrialised planet Hurston. This was another chance to show off the scale of the planets.

Leaving the ship and jumping on a Nox speeder bike, our demo player Glenn moved into the city to one of the factory areas where he hopped of and wandered around. More NPCs are still be added but Roberts wants to see 90% NPCs to 10% players which will make the cities feel highly populated.

That was it for this year, all that was left to do was gather team members on the stage and sing happy birthday to a blue cake to celebrate five years of Star Citizen development. Five years of waiting and waiting for something that sort of resembles a real game. 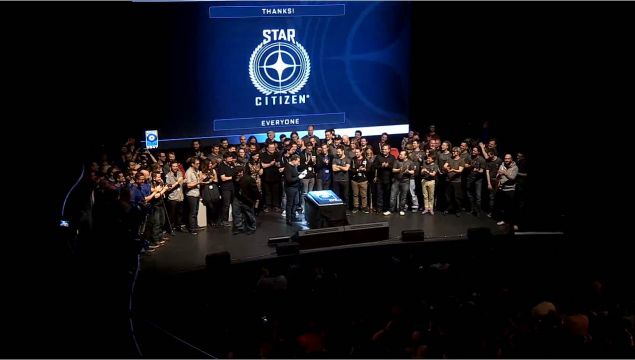 This year’s CitizenCon appeared to be a more successful event with an improved format and there was a little less hype coming from Roberts. It still leaves lots of questions unanswered and again I don’t feel any more reassured as a backer that what they are wanting to achieve is going to be possible in a reasonable timeframe and the funds they have. In another five years I may have zero interest in games like this or games at all. Who knows?

Star Citizen is worth keeping an eye on, but again, if you are not invested in this project, hang on and wait until there’s more of a game before parting with cash. There really is no rush to jump in now as there’s not too much to enjoy. With any luck 3.0 will be released soon to all backers and at least that will be a small step in the right direction.

Below you can watch the gameplay demo. The second video gives the full presentation with all the pre-chat.

By Steven Wong11 hours ago
Features