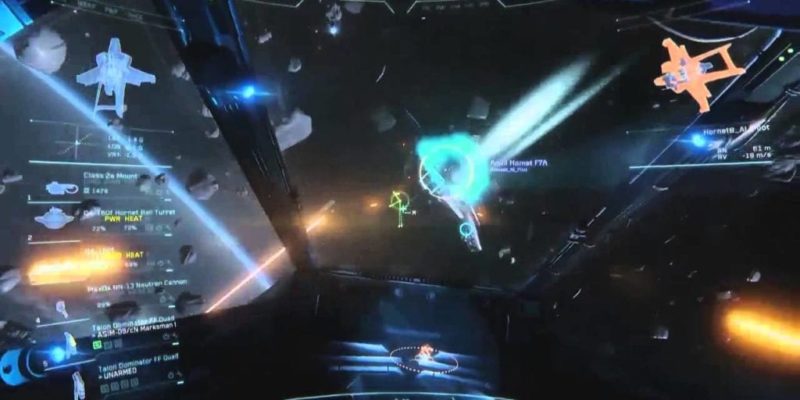 This evening Chris Roberts revealed the Star Citizen Dogfighting module live from PAX, an event fans have been waiting weeks for. The question is, has it been worth the wait?

The reveal proceedings finally got under way after a lengthy delay (and many jovial in-stream jokes about Chris Roberts being too busy counting money,) with the man himself taking the stage inside a packed theatre. The show kicked off with a video showing all the challenges the team has faced, plus snippets of the team testing the upcoming Dogfighting Module. All kinds of interesting bugs popped up including ships constantly rotating, missing ships, and, well, everything you’d expect to see in early versions of a game.

Welcome to the Dogfighting Module.

Just four days before PAX was due to start, the team tried the Dogfighting Module with Oculus Rift for the first time which revealed issues with the HUD. There was a HUD in both eyes giving a trippy double HUD effect. Mouse steering was broken and there were some amazing looking technicolour asteroids. Quite a lot of issues to get resolved quickly.

With three days left, play-testing continued on the module but it was now crashing when you toggled between targets. It was still in a pretty bad state, mainly due to the HUD crashing the game.

Two days to go and things were looking better but it was an all-nighter to get the game working as expected. General tuning was now under way.

One day left and it was time to bring everything together for this PAX reveal.

After that little development recap, Chris moved on to demo some of the improvements they’ve been working on in the lead-up to PAX. Chris showed footage of his character moving into a hangar, boarding his ship and then flipped his helmet on. The visuals looked absolutely stunning and the helmet flip got the crowd cheering. The hangar doors flung open and he finally launched into the embracing arms of space. 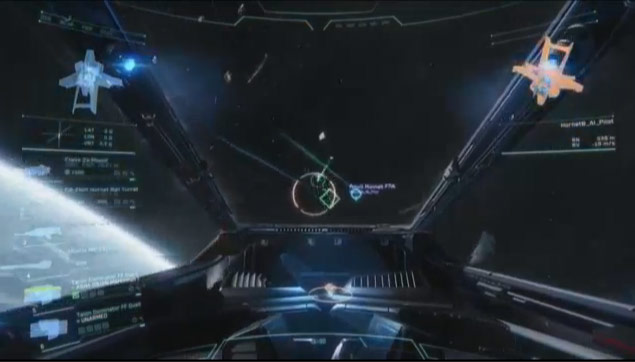 Look! Outside the hangar!

He showed the outside view and actually managed to crash his ship, much to the amusement of the audience. Chris had to restart, and blamed it on having a few drinks beforehand. It was then time to show the ship attacking a few targets before … he crashed again. Not the smoothest game demo we’ve ever witnessed, but it was quite funny.

After another restart it was back to the combat. The space combat looks amazingly fluid and he demonstrated the g-force effects on the pilot, including a black out effect on the pilot’s vision. From the outside you can see the pilot actually experiencing the ships movement in the pilot’s chair, shifting position in the seat depending on which way the ship is turning, accelerating or decelerating. This will all be in the Dogfighting Module.

Chris attempted a landing on a landing pad and every piece of the ship was moving in sync with his controls including the lowering of the landing gear. The level of detail on the ships is outstanding and even the asteroids look as real as you’re going to get.

The Dogfighting Module is not a simple alpha test, it’s part of what they are calling “Arena Commander”, a functional simulation inside your hangar. There will be leaderboards and five game modes, including Free Flight mode, capture the flag (Capture the Core), Battle Royale, Squadron Battle, and Vanduul Swarm when the module launches.

There will also be ranked or private matches for some competitive gaming. All this will be in the final game, but what the Dogfighting Module intends to launch with could almost be considered a game in itself and was probably more than most backers were expecting.

The following slides were popped up to show the development plans for Arena Commander.

Arena Commander is an “in-fiction experience,” and Chris says “it’s something to do before the final game.” This Dogfighting Module will expand as the rest of the game develops and updates will be rolled out over time. It’s a clever way to keep the community engaged and also test new features. New ships will be added, then multi-functional ships for co-op play and then first-person mechanics in a later update. The Module will also take place in the Dying Star of Pyros.

These slides show the features that are expected after the Dogfighting Module is released.

The initial release will be able to handle around 10-12 players in a dogfight but the plan is to get it up to 50-60 as soon as the network code is optimised to handle it. The game is currently 32 bit, but as the game expands they need to use  CryEngine’s 64 bit features so the team are now working on moving over to that for “double precision” and accuracy due to the fact the game universe will be very large.

With regards to the single player game Squadron 42, which is being developed here in the UK at the Cloud Imperium Manchester studio, Chris says that the game will have the scope of a full game and likened it to a next-gen Wing Commander.

To wrap-up the presentation Roberts said the Dogfighting Module will release at the end of this month or the beginning of next month so it appears there are no further delays at the moment.

After the demo of the flight model and features it was time to move on to a multiplayer match where a few of the developers showed their flying skills. Chris was using a gamepad but not very successfully. Sadly, the Cloud Imperium team experienced some real technical difficulties with the multiplayer and the demo was eventually abandoned after a few minutes which was a real shame.

The reveal this evening was a big moment for Cloud Imprium, after months of crowdfunding and over $41 million in the bank they needed to show how far the game has come. They did not disappoint. Star Citizen is looking like one of the most exciting PC titles that’s being created for many years. Cloud Imperium’s team state they’re wanting to create the “best space sim ever,” and even from the limited gameplay of the Dogfighting Module demo, it’s clear they are well on the way to achieving that.

Update: If you missed the presentation you can now watch it below and some gameplay footage

The Orcs Must Die! MOBA is happening

Magic 2015: Duels of the Planeswalkers wants to deck you this summer