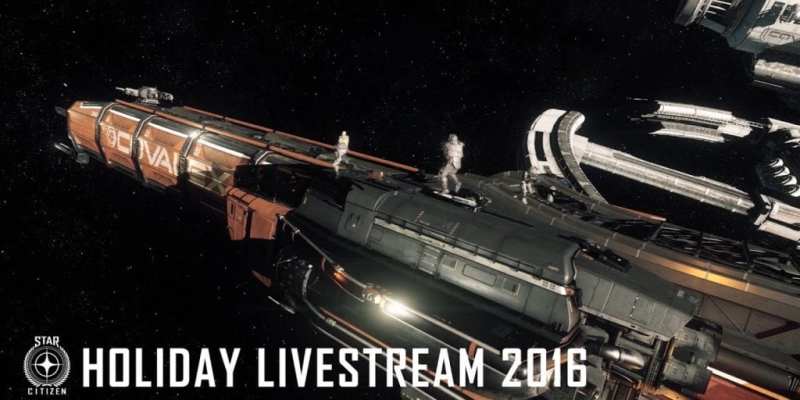 This evening CIG held a live Star Citizen holiday stream for the community and backers but it was a right mess.

What could only be described as streaming amateur hour, the stream was extremely cringeworthy. Not only was the audio either not working or out of sync for much of the stream, but the whole first part was simply terrible. The commentary over the 2.6  gameplay in the first section was embarrassing, and why anyone would want to watch the devs challenge each other on the race tracks for a large chunk of the stream is a mystery.

Many backers had tuned in to finally see something of Squadron 42, which was absent at CitizenCon a couple of months ago, but nothing appeared.

CIG released a statement on progress just prior to the stream via a newsletter.

After we made the decision before CitizenCon that the Squadron 42 vertical slice wasn’t ready to be shown publically, we spent some time on reviewing how far off we were and what we wanted to achieve in order to be comfortable showing a full chapter of S42 gameplay.  After all the effort we expended for CitizenCon, we didn’t want to spend additional developer time polishing intermediate solutions if it wasn’t going towards the final product. A slick demo isn’t that helpful if it pushes back the finished game, so we decided that the priority should be completing full systems over getting the vertical slice into a showable state.

So no Squadron 42 footage then. You can read the full newsletter here and see if you can spot the waffle.

2.6 was also scheduled for a 16 December release on their development schedule but that has been pushed back by at least next week. It may arrive on the PTU this weekend for select testers.

The part of the stream that really rubbed some backers up the wrong way was the push of more ship sales. With nothing really new to show in the stream apart from some Vanduul concept work, asking for more cash has been a step too far for some.

While backers like myself still have some faith Star Citizen will work out, CIG is not helping itself at the moment. The only positive to be taken from the stream is that some backers might finally put their wallets away and force CIG to get an actual game out the door.

You can watch the Star Citizen holiday stream below for comedy value but there’s not much else worth watching it for.

Update: CIG have now pulled the live stream video from their Youtube channel so we have removed it. You can watch it on their Twitch channel if you really want to and the main segments can also be viewed separately in this post.