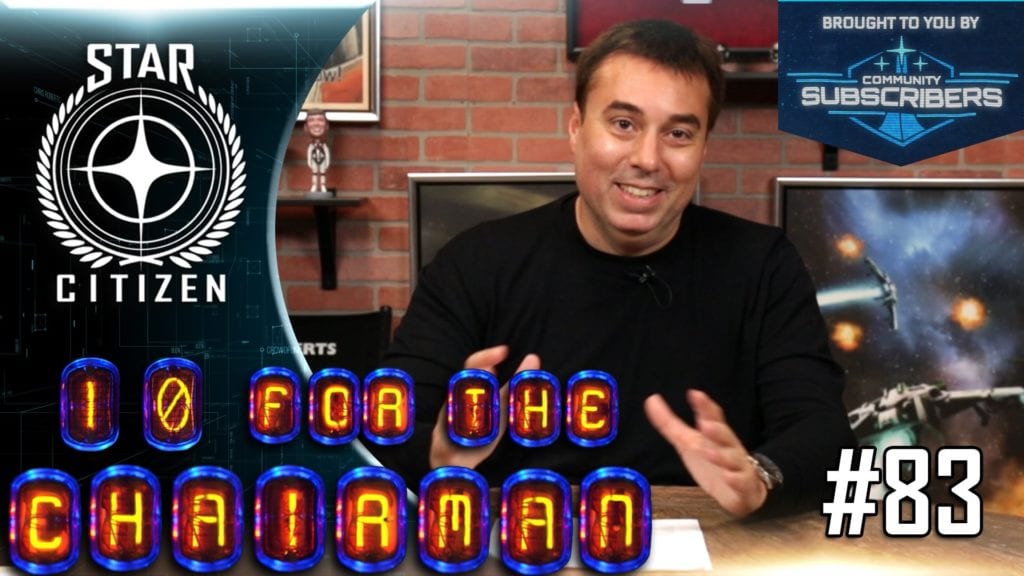 The latest Star Citizen Ten for the Chairman episode has just been released and it contains comments from CEO Chris Roberts that might not please everybody.

In the video Chris Roberts states that CIG won’t be adding all the later stretch goals into the game’s final commercial release despite having raised in excess of 112 million. Stretch goals were set up to $65 million before CIG decided to stop offering further funding goals.

To put the statement in context, This is the full transcript and the video is below.

“Star Citizen is never going to be finished, I don’t think people say EVE or World of Warcraft are finished. Star Citizen will go on, that universe will go on as long as anyone is wanting to play it which I am hoping will be for a long time. Obviously, the games I have mentioned have been ten years plus. What we are doing with Star Citizen is we are working on the game adding features, it’s incredibly ambitious, I don’t think there is any other game doing as much as we’re trying to do. Degree of difficulty 11, not 10.

“We’ll have what we determine as a minimal viable product feature list for what you would call Star Citizen the commercial release, which is basically when you say OK, we’ve got to this point and we still have plans to add a lot more cool stuff, and more content, and more functionality, and more features, which by the way includes some of the later stretch goals which we have because not all of that will be right here fo the commercial release. But we’ll have something where we think, ‘Yeh, now everyone can play it, it doesn’t matter, you can load it up, it plays really well, it’s really stable, there’s lots of content, there’s lots of fun things to do, different professions, places to go’.

“When we get to that point that’s when we’ll say it’s not alpha or beta it is Star Citizen 1.0. Of course, the team is going to continue working on it. If you look at WoW, they continue to add content and features all the time. We’ll continually update the graphics, we’ll add new functionality, new content, new systems, coMing across additional alien races. We’re going to work on this as long as you guys let us do.

“The world is huge, there; so many things to do, same with Squadron 42. Once we’ve told the Squadron 42 trilogy we’ll move on and have other stories to tell, not necessarily a military story, maybe it’s an adventure, a sort of Han Solo style adventure. It’s a huge universe. Look what Disney’s doing with Star Wars. They’ve got a whole roadmap of the main ones, spin-off ones, and all the rest of the stuff. So I think Star Citizen has the possibility of a huge interesting universe, we’ve really put a lot of effort into the lore from the very beginning.

“We want to make this world as livable and breathable, and you guys spend many years adventuring around in it and I think in today’s world it’s not like it used to be where you say here’s a game, you put it on the shelf and then you come back to another game a year or two years later then iterate it. With us we’re just live and continually adding and improving it. It’s kind of like we’re doing right now but with more features, more content, better stability, better performance under out belts and then we’ll say, yep, ready for the full general public”

We’ve been concerned about feature-creep with Star Citizen for a couple of years now, and while it’s normal for an MMO to release new content, the comments in the video are very sketchy. The project is ambitious and that appears to be the problem and why visible progress has been slow. Will it ever come out? Possibly. Will the initial release contain most of the expected features? It’s not sounding like it. This could be a very, very long project so let’s hope that CIG

Some of the later stretch goals are not exactly important such as pets but there are goals such as ship modularity, the Genesis Starliner which has already been up for sale as a concept ship, and “more detailed AI activities”. There’s a lot of features that may not appear for some time after a commercial release. Anyone who’s been following development closely will be under no illusion that many features won’t make it in for release but it’s still concerning.

The project is ambitious and that appears to be the problem and why visible progress has been slow. Will it ever come out? Possibly. Will the initial release contain most of the expected features? It’s not sounding like it. This could be a very, very long project so let’s hope that CIG manages to keep afloat long enough to see this through.