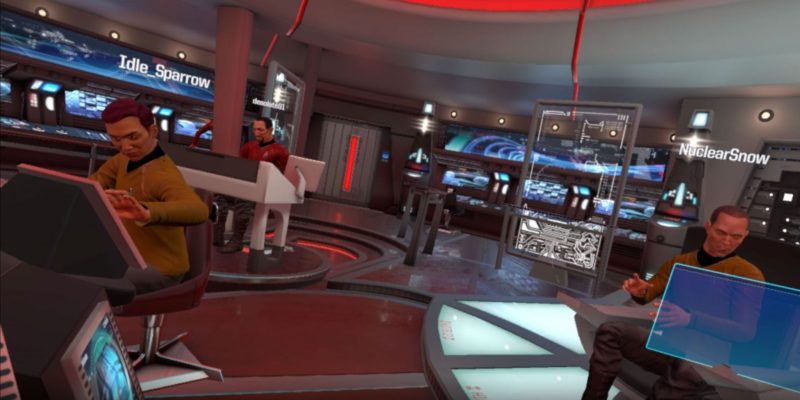 There’s been a severe lack of decent Star Trek games in recent years (let’s try to forget about the film tie-in from 2013) and a new one was long overdue. Star Trek Bridge Crew is the latest VR offering from Ubisoft and developer Red Storm. Their aim is to pull Star Trek fans onto the bridge of a Federation starship in VR for the first time.

VR is tricky to get right. With cables still being a thing that keeps you tethered to the PC, seated games still work best. It’s just a lot less hassle and cumbersome. With that in mind, taking VR users onto the bridge of a starship is a fantastic idea and Star Trek’s bridge designs lend themselves perfectly to a VR seated experience. Couple that with different crew members manning the multiple control stations on a bridge, suddenly you have the recipe for a solid multiplayer VR experience.

Star Trek Bridge Crew has been designed for co-op with up to four players, each taking on different roles the bridge. There’s the captain to co-ordinate the other three crewmembers, the helmsman to pilot the ship, the tactical officer to handle weapons, and last but by no means least the engineering officer. 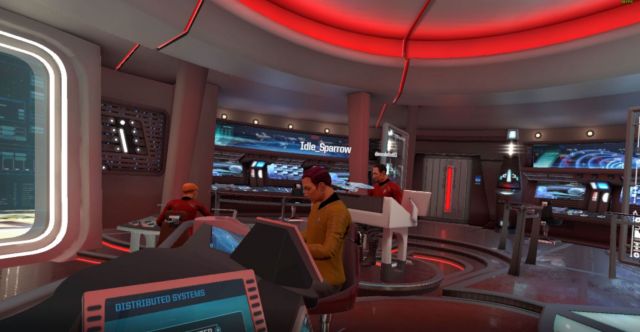 Anyone who has watched Star Trek over the decades will be familiar with all the roles. Most of us have watched enough episodes to know that the bridge of any Federation ship can fall apart without great teamwork. Ubisoft’s aim is to harness the power of teamplay to take all players on a journey into the Star Trek universe.

The game starts with an introduction to all the different roles. With the VR headset on, the Vive in our case, and motion controllers in-hand, players are guided through the basics of each terminal in each bridge position. The controls are simple enough, use the controller to point a finger and press, activate, and pull buttons on the virtual console you see in front of you. It’s quite intuitive and easy to grasp. I can’t determine whether that’s because I have watched hundreds of episodes of Star Trek or because it’s just well designed. Either way, it works really well.

Although the game is designed for four player co-op, the game can be played single player. If you undertake this trickier task then you assume the role of the captain but at any point you can jump to any of the other positions on the bridge and take direct control. While this works in practice, it’s a lot harder because different roles rely on each other to carry out actions at certain times. For example, if you instruct the helm to warp, the engineer has to make sure there is adequate power to do so. It’s much trickier playing this game solo as some jumping between crew members is necessary and this makes the game a lot harder as missions get tougher. 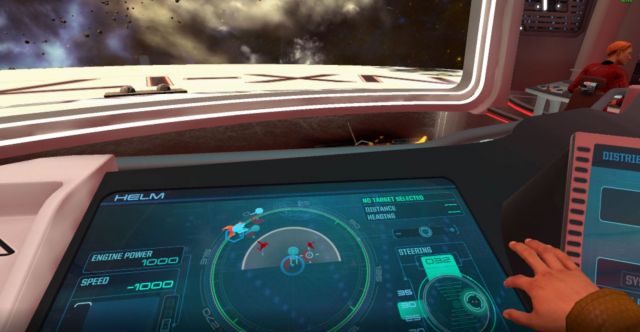 Once the controls are mastered players start the campaign on board the Aegis ship. It’s a modern looking vessel compared to the classic Enterprise we all know and love from the 60s. The layout is essentially the same though; large viewing screen to see outside the ship, and the main stations positioned in front of the captain’s chair. The campaign eases players into their roles, starting with a brief scanning mission and then moved on to a reasonably simple rescue mission. It is strangely compelling and it does make you feel like you are actually there taking part in an episode of the TV show. When you’re playing with real players it’s even more exciting.

It’s worth pointing out to Trek fans that the original Enterprise can be played in the game but it’s a lot harder to control due to the ship’s terminals on the older ship being less impressive and modern in Star Trek terms.

Co-op is absolutely the ‘proper’ way to play Bridge Crew, and it can be hilarious. My first live game was packed with expletives (Roddenberry may not have approved). We had a captain who was keen to get us through the mission as stealthy as possible which meant creeping around anomalies and avoiding Klingon ships. This involved all four of us fumbling around for ten minutes pushing buttons. Eventually though, it all started to fall into place and we stealthily moved to each mission point without being detected. We had kept a low signature on the ship to avoid being caught.

After being spotted by the Klingons the captain was keen to shout “OK, let’s get the fuck out of here!” As I was in control of the helm it was up to me to position the ship toward the waypoint and get ready to jump. Unfortunately, engineering had forgotten to charge the warp coils so it took a little longer to get moving. After a few more stops we managed to complete the mission on the first attempt which was pretty good going. We had one toilet break from the tactical officer and a captain that continually chewed food into the microphone. Just like a real episode.

After playing in the co-op it’s obvious that the developers have thought really hard about how to make Star Trek Bridge Crew feel immersive. With all arm movements being tracked and mouths that move when you’re talking into the mic, it feels bizarrely real. Add the recognisable Star Trek sounds and visuals on top and it really is quite something. There’s always a lot to think about no matter which station you’re positioned at. Weapons, shields, speed, warp, comms, the transporter and more all come into play. When the action heats up, players need to be on the ball.

As a Star Trek fan, I have to say that Ubisoft has captured the experience brilliantly. Sure you can’t get up and walk around, the Star Trek Prime Directive doesn’t really matter that much, and you are at the mercy of your teammate’s actions; but if players gel on the bridge then it’s quite enthralling. The campaign may be short but with the quick play missions there’s plenty to explore and plenty of challenges. The game also cross-platform so Vive, Oculus and PSVR players can all join up which should help keep the player base healthy.