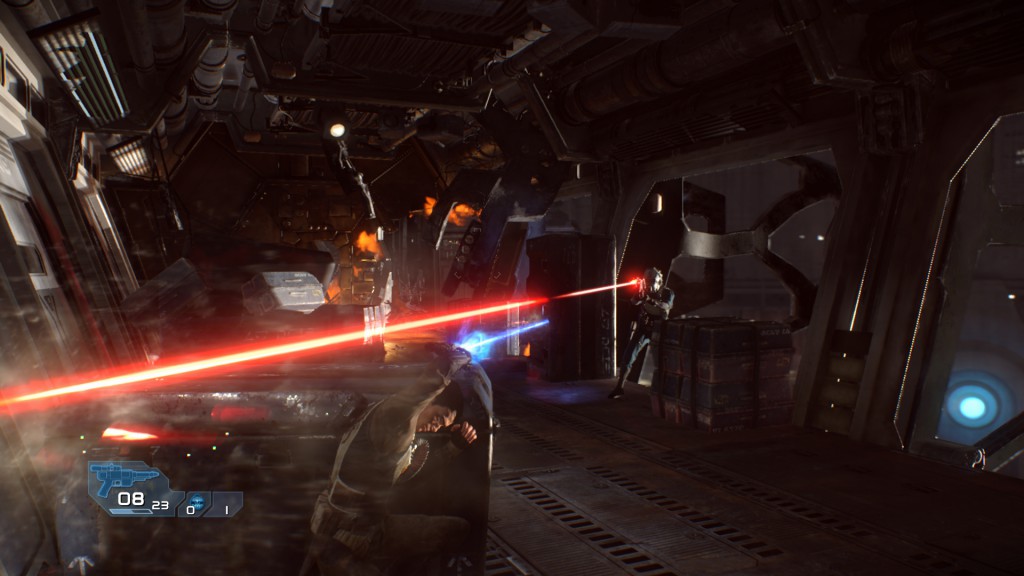 To say that Lucasarts is being tight with the information about Star Wars 1313 would be a bit like suggesting the Emperor was “slightly put out” by the destruction of the Death Star. It’s quite an understatement, and as a result there’s no way we can bring you a full preview of the game. Instead, here’s a summary of what little information has been squeezed out of reluctant Lucasarts representatives, intermingled with three clips of the game in action.

In this first snippet, we get a look at the unnamed main character and his mysterious companion as they leap around the burning hull of a space craft.

Recognise the location? It’s one of the many levels of the planet Coruscant, the political hub of the Star Wars universe. You’ll play as a bounty hunter with a mission on level 1313 of the planet (hence the name). Lucasarts is “not ready to talk about who you’re playing” in terms of his backstory or motivation (see, told you they were being tight with details), but it’s fair to say that the deeper levels of Coruscant have a history of being filled with more unsavoury types, so you must be on some kind of job.

The developers have at least shown us that the game will employ some third-person shooter mechanics, so let’s take a look at this gameplay in action in the following clip.

As you’ll probably just have seen there, gunplay and melee mechanics look to form the backbone of this title. Lucasarts have confirmed that there the lower levels of Coruscant are far away from the Jedi and their traditional force powers. 1313 is aiming to be “grounded” in ballistic weapons and away from the force shields and lightsabers associated with so many Star Wars projects.

It’s be revealed that special gadgets and custom weapons will be making an appearance though, and that these will supposedly let you “push the limits” of what you can normally do in a cover-based shooter. The jury is out on that claim until we see some proof of it in action.

1313 takes place between the two trilogies on the Star Wars timeline; so just before Star Wars: A New Hope and just after Revenge of the Sith. The team is suggesting that they want the game to be “more like the original trilogy” in terms of tone, and a more “mature” title overall. That doesn’t mean blood and gore around every corner, but instead refers to the type of characters and themes Lucasarts is aiming to explore.

It’s “currently” a single player only game, with a linear storyline (branching narrative lines have been ruled out). The game is said to be running on a modified version of the Unreal Engine 3 and all of the videos in this piece show the game running on PC. Other platforms have not yet been confirmed, nor has any kind of release window.

Like much about this game, it’s a case of wait and see.

Buffy up on your vampire knowledge for Sacrilegium