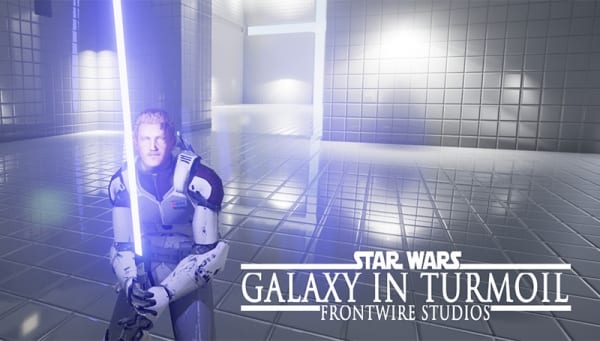 The Star Wars Battlefront 3 inspired fan project Galaxy in Turmoil has been ordered to cease development by Lucasfilm.

Galaxy in Turmoil had gathered quite a following and had even been accepted onto Steam. With EA now firmly entrenched in the Star Wars universe with their own Battlefront series, Frontfire Studios must have known that a letter would be winging their way ordering them to stop.

The real objection to the project has come from EA as Frontfire Studios’ explains in their lengthy update.

“On Wednesday June 22, 2016, we received a letter from Lucasfilm requesting that we halt production of Galaxy in Turmoil with any Star Wars related IP at once. Rather than laying down at the first sign of trouble, I requested a meeting with the Lucasfilm executives to discuss our project and to find some common ground to work with. Honestly, I didn’t expect too much negotiation to occur. But much to my surprise, executives at the top of Lucasfilm agreed to meet. A week later, that meeting took place.

LucasFilm informed me that although they would of been open to the idea of negotiating a license for Frontwire to work on the Star Wars IP, that they are not able to due to their contract with Electronic Arts (EA). I was told that Lucasfilm had already spoken with EA about Galaxy in Turmoil and that EA expressed no desire in letting our project continue. Their main concern was due to the possibility of Galaxy in Turmoil taking away attention from their Battlefront franchise.”

Frontfire Studios are not giving up on the project and are now looking to move the game into a new universe.

“Our team has been hard at work creating this new universe and are excited to continue to share new and exciting information with you over the next coming weeks.

“Our team had a creative meeting last night and let me be the first to tell you that we are all extremely excited about the new direction that GiT is taking, and we know the story we are going to put out will blow you away”

The Steam page for the game has already been changed and all Star Wars references have vanished.