Starpoint Gemini 2 is more difficult to describe than you might expect. You’re a space pilot with a lone craft left to your own devices in a wide-open galaxy, trying to make a name and a fortune for yourself. But it’s not quite like Elite because the combat is more detached and tactical. There are freelance missions, massive space structures, and a selection of craft to purchase and upgrade. But it’s not quite like the X games prior to X: Rebirth, because there isn’t so much focus on a fully simulated economy or setting up a trade empire.

I’m not even sure if it’s like the original Starpoint Gemini, because I never played that. This sequel takes a little of what you’d consider to be the ‘traditional’ open universe, mixes in some straightforward tactical ship commands and then adds a couple of cooldown skills that wouldn’t be out of place in an action-RPG.

Anchoring at space platforms brings up the shipyard, trading options and everything you’d expect from a service station of the future besides a Little Chef.

Those are the parts of Starpoint Gemini 2 I’m confident about, because they’re all in the game right now. As the heading of this piece may well have given away, it’s a title that’s in Steam Early Access at present. Originally describing itself as an alpha, developers Little Green Men have now made enough progress to start calling it a beta instead.

That seems reasonable, as what I’ve played of the game so far was pretty stable and has a number of features that feel close to complete. There are also a few other areas where it seems clear further work will be done to flesh things out. The skeleton of a trading system is present, for example, but the current numbers don’t really seem all that balanced. I’d be making a few thousand credits from scavenged cargo or asteroid mining, but a license for slightly improving prices in certain systems would cost me 250,000.

In effect, the trading aspect feels like a placeholder. It’s an indication that, yes, this sort of system will be present at a later date, but right now you shouldn’t try to make your fortune this way.

You can dock at planets too, with much the same interface options as a space platform.

In fact, you should probably forget about making vast profits from any beta activities. The rewards for successful missions don’t yet seem to tally with the high prices for ship upgrades, to the extent that the recommended method of getting hold of top-end craft right now is to give yourself one million credits by altering some data files. Again, this is no doubt one of the work-in-progress aspects.

Those unfinished bits are to be expected with the current build, but even at this early stage Starpoint Gemini 2 shows promise in its slightly unusual approach to a familiar genre.

The one and only method of play open in this version of the game is of the freeform roaming type. Eventually, Starpoint Gemini 2 will have a story-based campaign, which should help to explain who the many, many universal factions are and what they’re all about. I know The Syndicate are bad, because their ships are red and they attack me on sight. That’s about all the character development they get in free play though. Likewise, several of the impressive space station structures I’ve docked at have their own visual style, but there’s not much sense of a defined factional narrative beyond that.

The universe is divided into hex grids. In this shot I’ve travelled to about 12, which is a fraction of the entire map.

But hey, it’s a beta. There’s a reputation system present, so you will, eventually, be able to cosy up (or annoy) whoever you like. Theoretically, reputations will alter when you perform tasks in the relevant sectors, although this feature doesn’t seem all that functional at the moment.

I realise that’s a lot of chat about stuff that isn’t quite working yet, but on the strength of the parts which are operating correctly I’m fairly confident in the developer’s ability to finish up the rest.

The bulk of what’s open to players in Starpoint Gemini 2 right now is in the form of freelance missions, exploration and general combat encounters. I spent a lot of my time doing the former, which involved investigating and scanning anomalies, carrying specialist cargo (at one point transporting vital Office Supplies through a deadly region of space,) assassinations and simple repair work.

Those tasks involve a fair bit of flying back and forth, but Starpoint Gemini 2 has a couple of tricks to prevent that becoming boring. Long distance travel can be achieved with single-use items, or by flying through either interstellar highways (these are absurdly expensive) or wormholes (free, but weird.) The game also has an energy distribution system like the older Tie Fighter titles, enabling you to whack everything into the engines to get yourself somewhere at a fair lick. It doesn’t hurt that the space scenery and ambient music are both worthwhile distractions. 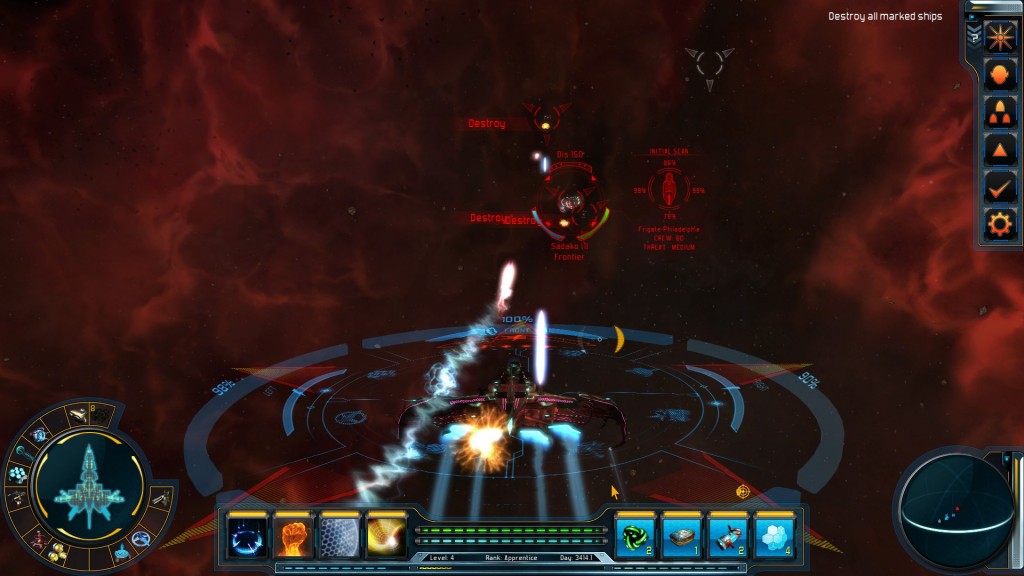 The tactical display around your ship flickers into life in a very pleasing fashion. It doesn’t have a default key assigned to it, though. Beta code, everyone!

Inevitably, you’ll end up either seeking out some combat or just run into some while flying through a dangerous sector. It’s possible to fight with manual aiming, but there’s also a very handy “fire at will” command that can allow you to focus on your other tactical options. Directing power to shields or weaponry is a possibility, and so too are the cooldown abilities that can boost your defenses, mobility or reflect damage back at your aggressors. Larger ships have the option to launch fighter wings. If you have marines on board, you can even board an enemy vessel and have it towed back to the nearest space dock to be stripped for parts or sold off.

The slightly more elevated sense of command is novel and feels effective. Some of the weapon impacts could do with a little more weight behind them, but Starpoint Gemini 2 has a full range of targeting options and a gravidar to make sure you always know where to point them. That may seem like a given in this genre, but X: Rebirth somehow managed to launch without those basics.

Combat feels satisfying, with strong ties to the RPG-like levelling and cooldown abilities. And while the universe is currently lacking in focused narrative and balanced prices, it’s a vast arena to explore and offers the freedom of multiple mission types. It’s the definition of Early Access complete with semi-implemented features and loading stutters when entering new sectors, but like the steady coalescence of a new star Starpoint Gemini 2 has promising materials at its heart.

Starpoint Gemini 2 is currently in Early Access on Steam.