Starpoint Gemini 2 has been out for a while now, but it’s one of those games that I’ve been ducking in and out of since its release. Having notched up significant time in this open-ended space experience it was about time I put some words together.

I didn’t play the first Starpoint Gemini so I was going into this blind, but I don’t think playing the original is necessary for understanding and enjoying this sequel anyway. It’s a space game all about trading, capturing, and flying multiple ships about in the massive universe created by developers Little Green Men (LGM) Games. It’s the kind of title I love to get lost in for long spells then return to later when there’s some free time.

Upon first launching the game, you’ll be bombarded with tutorial tip screens. These can, of course, be ignored, but judging by the complexity of the interface it wouldn’t be a smart move. Buttons, skills, pop-up menus, information screens; they all suggest that you’d be extremely stupid to dismiss the tips. You want to survive for more than ten minutes in space, after all.

Before I continue, despite some similarities of theme this game is not Elite: Dangerous or Star Citizen. It’s not a space flight sim. If you’ve read otherwise then don’t be fooled. Starpoint Gemini 2 can best be described as a tactical space sim with exploration and missions. There’s no cockpit view whatsoever, which is a massive hint that there’s more to this than flying about and shooting stuff. 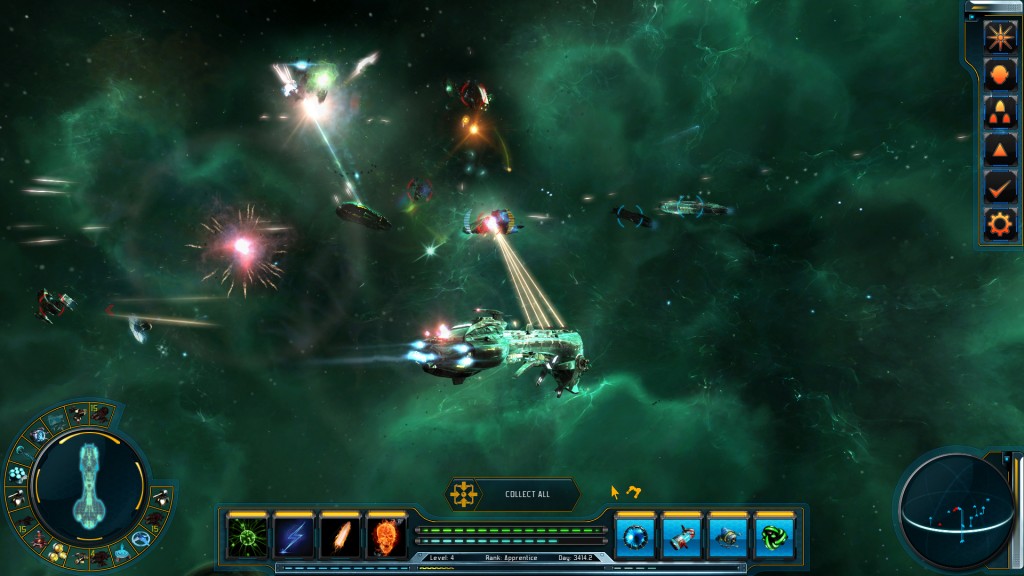 Well, okay, there is SOME shooting stuff.

LGM have attempted to add a story to the game to entice players into the universe, but it’s definitely not the game’s strong point. While the story attempts to teach you the game mechanics, it doesn’t do it particularly well. Unless you undertake a significant amount of reading about the various controls and features before hand, it’s all a little confusing. Even the in-game tips omit information that would help in the early missions. The campaign seems like a bit of an afterthought, further demonstrated by the fact you’re prompted to opt out of it not long after starting. The voice acting is also quite terrible. I can’t stress that enough.

Let’s not dwell on the campaign though, because while it’s worth persevering with for an hour or so, the game has much more to offer if you just let it take you along for the ride.

Getting to grips with ship control isn’t that easy at first, because there are number of ways to view the action. There’s the turret view which allows you to swing around the ship so you can track everything around your vessel; the mounted view which sits you just above the ship; and a third person view which sits you just behind the ship. All have their own advantages depending on the situation and half the battle is understanding when to use which view. It takes practice to nail this when the combat gets busy and you need to start switching rapidly between them. As ships have location based shields, being aware of what’s attacking (and from where) can be the difference between life and death. 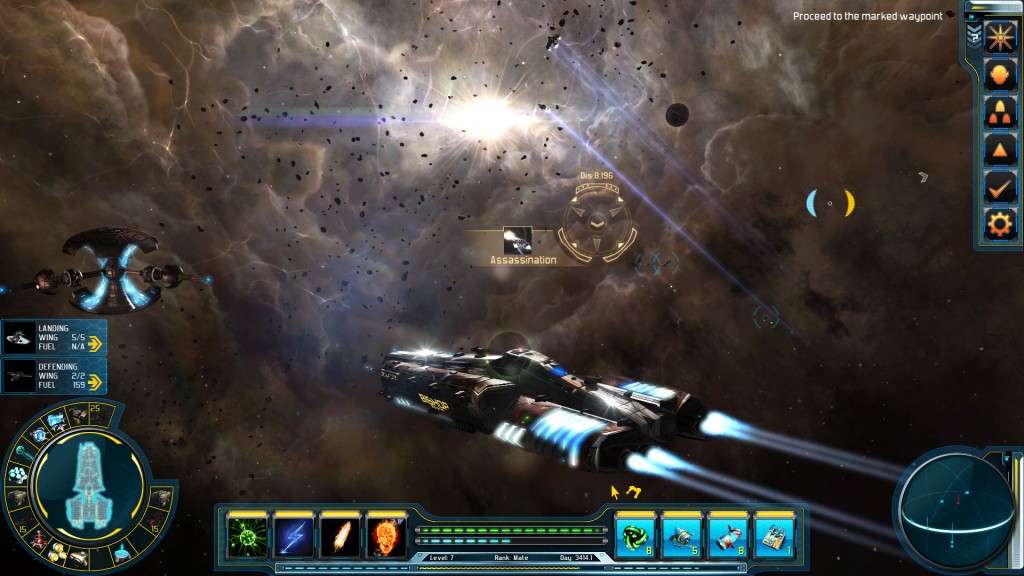 From the turret view

There are essentially two ways to command the ship; taking control of the movement directly, or by hitting the spacebar to relinquish control to the mouse pointer, which can then be used to carry out direct actions on the multiple interface options. This works well, and while you’re travelling from A to B you can peruse through the menus to check the logs, check finances, perks and skills, ship systems and more.

LGM have given players freedom with the controls and, thanks to this, players will likely tackle each situation differently. Whether it be taking direct control in combat or setting the ship to fire at will. When battles get intense you at least have the option to let the crew take control of fire while you mess with the balance between the skills, ships shields, weapons and power. When you’re under heavy attack the situation can get a little frantic, so it’s essential that all the hotkeys and UI have been mastered well in advance.

Starpoint Gemini 2 is vast in scope. LGM have created a pretty massive universe, and, with it all covered up by the ‘fog of space’ until you explore the different regions, it can feel a little daunting. Without a star chart highlighting T-Gates (jump gates), navigating between objectives can take quite some time. During the early campaign missions it took ages finding the most effective route so I ended up hunting down a complete star chart to make things easier. It’s a bit of a cheat but removed a lot of the frustration by being able to travel vast distances by navigating along the T-gate routes. Using the gates costs money though, which for me was just further incentive to undertake more side missions and work towards equipping a T-drive for quicker jumps (without the need for gates.) 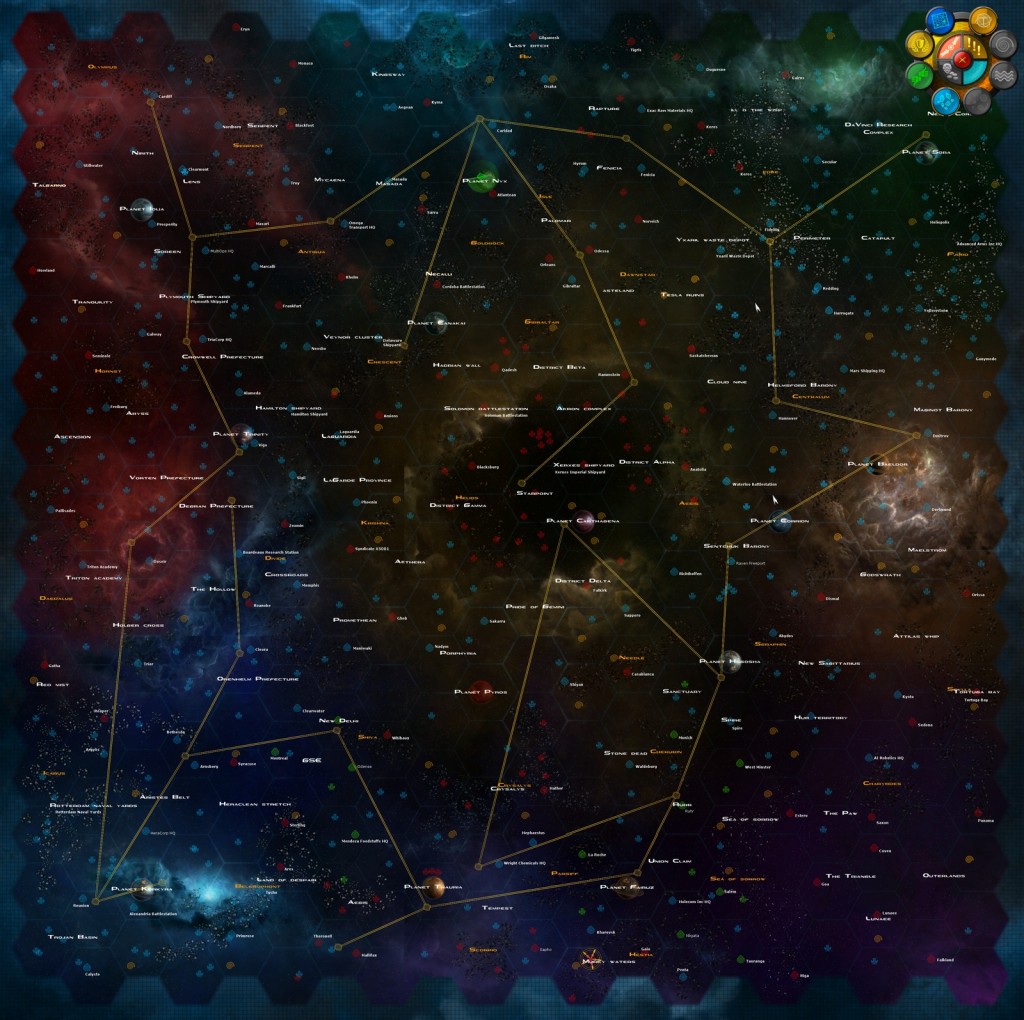 The vastness of space. Feel free to use this as a handy guide yourself (click for larger version.)

Ship upgrades like the T-drive are essential to survival as the enemy get increasingly tough the further afield (um, astar?) you travel. Making periodic stops at stations to sell acquired loot then enhancing turrets and ship systems will make progression a lot less painful, especially in the campaign mode where some of the missions still feel a little unbalanced. When you’ve got enough cash you can also buy a new ship which is always a nice incentive to keep playing.

As more of the universe is uncovered you’ll hear alerts from the ship’s computer about entering hostile space and new freelance mission updates. These alerts give you the freedom to hop between missions and ultimately increase your wealth. They can also help you to discover more of the universe by seeking out anomalies, wormholes and potential targets for profit.

The main attraction of Starpoint Gemini 2 is the ability to lose yourself in the single player space exploration, but it has that steep learning curve. Understanding and mastering the controls will get you off to a solid start, but there are also levelling up, upgrades, skills, perks, weapon enhancements, hiring mercs, hiring officers, boarding ships and weapon load-outs to deal with. And that’s scratching the surface.  All of this should not be a problem for those prepared to put in the effort, however. A space sandbox title like this is almost expected to be hard to master; you just need to persevere for a few hours and it’ll start feeling rewarding. 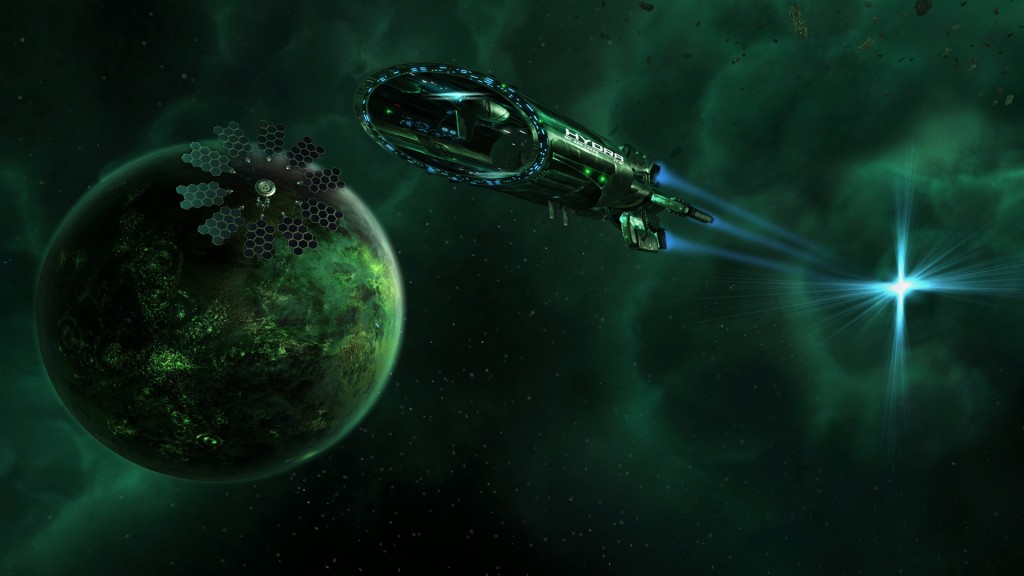 Starpoint Gemini 2 does a reasonable job in the visuals department. Especially if you like green.

Tackling this review over a longer period of time than usual has helped me appreciate the work that’s been done by LGM. Starpoint Gemini 2 may not be pushing visual boundaries, but it’s solid enough and has plenty of atmosphere with its soothing music and variety of space locales as you travel around the universe. There’s enough depth here to keep space adventurers playing for some time; and with mods available in the Steam Workshop, there’s a steady stream of new content and tweaks to experiment with.

If you’re looking for a strategic space sim with combat, exploration, strategy and the ability to roam freely around vast universe then this will be for you. Just be prepared to do some reading and research if you get stuck, and pay attention to all the tips. It’s a shame that the single player campaign isn’t up to much, but if that doesn’t bother you, then Starpoint Gemini 2 is definitely worth a purchase because it’s thoroughly enjoyable as an interstellar sandbox.

Steam’s Exploration sale wraps up with some December deals