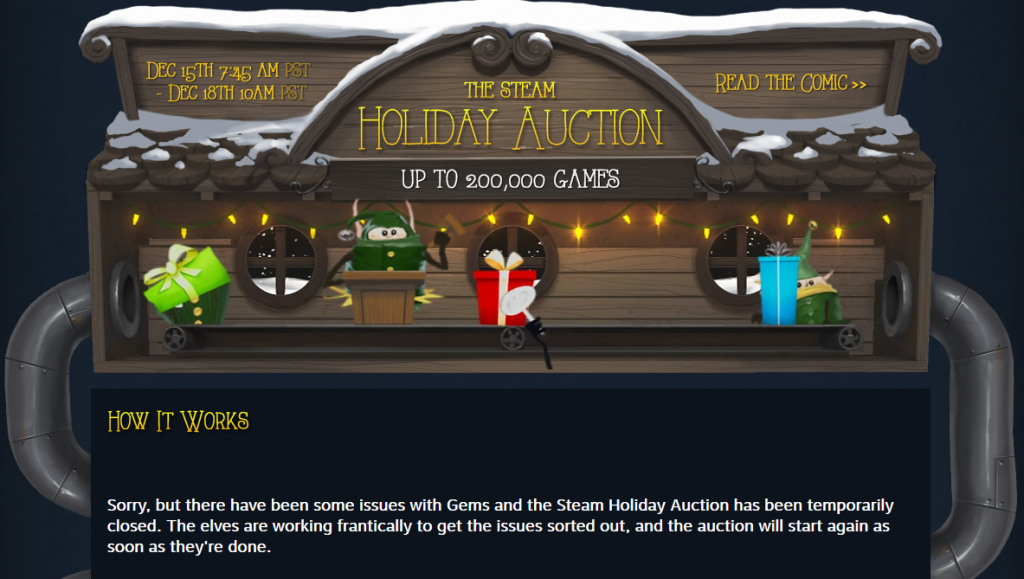 Valve’s newly-launched Steam Holiday Auction is now newly-disabled, presumably thanks to the efforts of a few exploiters.

Originally, it worked like this: Steam would chuck a number of  games up for auction, and players could bid on them with gems acquired by converting unwanted Steam Community items – trading cards, wallpapers, etc. Judging by Reddit, a few people then discovered how to get utterly astronomical numbers of gems. As such, the auctions are currently disabled, as is the ability to convert gems into booster packs.

Valve don’t appear to be exactly confirming the reason behind this, but people are noticing that their gems, crafted booster packs, and the like are disappearing from their inventory (and/or reappearing with Not Tradeable, Not Marketable tags), which tends to confirm the theory that the people who’re sitting around with a few billion gems have probably exploited their way to them rather than spending insane amounts of cash on them.

All Valve are saying, though, is: “Sorry, but there have been some issues with Gems and the Steam Holiday Auction has been temporarily closed. The elves are working frantically to get the issues sorted out, and the auction will start again as soon as they’re done.”

The Steam Holiday Auction will likely be back up before too long, but until then we’re going to have to guess how Valve is going to sort this. Inventory rollback? Leaving things as-is but with all current gems unmarketable? Hmm.

AirBuccaneers now free on Steam to spread some holiday cheer