A new chart was posted by SteamSpy which shows which games on Steam have been over-hyped and also games that have been a surprise hit.

Marketing plays a huge part in hyping a game, and as most PC gamers know, hype can sometimes lead to huge disappointment when the game releases.

The charts posted by SteamSpy today show the top hyped games based on the initial player numbers and the drop-off in players two weeks later.

Conversly, a list of games with surprise factor has also been put together to show games that have proved even more popular after two weeks. Many of these games had small or no marketing budgets whatsoever.

There are factors that need to be taken into account such as type of game, price, and whether it’s single player or multiplayer. These charts do show the power of both marketing budgets and word of mouth within the gaming community.

Hype is a massive problem in gaming and the top list shows the how important it is not to buy into the hype. Games such as No Man’s Sky and the Mighty No.9 left many players disappointed when the final product was released.

A final chart also shows how user scores on Steam tend to drop off one month after release. This is probably because the hype and excitement surrounding a release tends to dissipate, and as time goes on and more players pick up a game, they look at it more objectively. 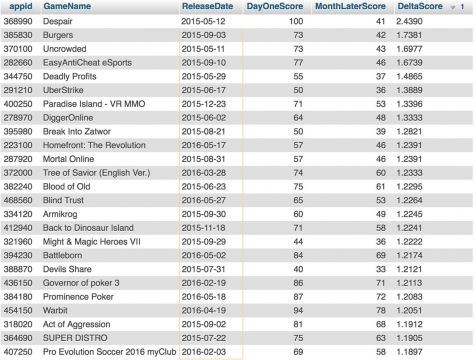