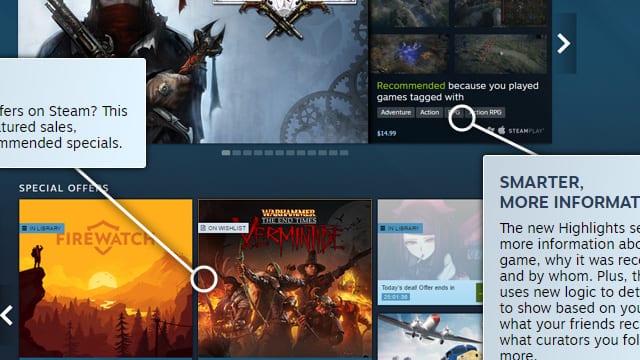 You’ve probably noticed by now that Steam has got a different look to its front page, as part of a ‘Discovery 2.0’ UI make-over. Among other things, the ‘featured and recommended’ titles now have a small drop-down menu in their top-right corner, so you can quickly add them to a list of interest (or dismiss them).

Over on the left hand side of Steam, there’s now a ‘recently viewed’ section. Scrolling down the page, you get to see which games are being played to death by those on your friends list, and which games in your library have had recent updates.

The ‘new releases’ section (which is now quite far down) is personalised to a degree, so it filters out the games you already own on Steam and any tags you’ve selected as ‘not interested’.

The update also comes with buttons that are more visible and the whole page is more spaced out.

Whether the update is more useful at suggesting games remains to be seen but Valve will be hoping it drives more sales and helps developers shift games. With more than 10,000 games on Steam, developers need all the help they can get,