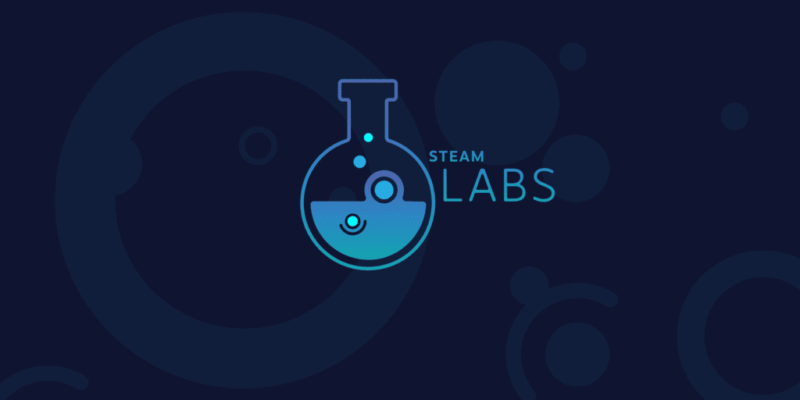 Today, the Steam Team at Valve announced the release of Steam Labs. The project aims to bring experimental features to the public for open testing and feedback. While Steam can at times appear to move at a glacial pace for getting meaningful changes, that doesn’t mean that the developers at Valve are slacking off.

One of the projects mentioned in today’s release, titled “Organize Your Steam Library Using Morse Code,” definitely falls on the wacky side of potential features. That said, it shows that the team behind the Steam scene are still trying to find interesting ways to push the platform. While the Morse Code update likely won’t be gracing us anytime soon, three experiments did launch with Steam Labs today: Micro Trailers, The Automated Show, and The Interactive Recommender.

Micro Trailers gets its name from the Twitter bot of the same name. The concept is so simple it’ll blow your mind. What if you could get the gist of what any game is in just six seconds? The Twitter bot produces an endless stream of posts based on the latest releases. The Steam Labs version offers a little more control. You are offered up multiple options to start like ‘Classic Micro Trailers’. This lets you watch the condensed videos based on categories like popular new releases, genre, or even concepts like “dragons”. Just click into one of the subcategories and then hover your mouse over any games that catch your eye to get caught up to speed in seconds.

Alternatively, you can force trailers to fight for your attention by watching an entire row of micro trailers all at once. Only the flashiest will win your hard-earned attention (and, hopefully, your hard-earned cash). Want that same experience without all the effort needed to hover over a row? The Scroll to Play option removes the need to move your wrist. Trailers simply play as you scroll past them. Lastly, The Big Quad Videos option breaks each micro trailer down into a 2×2 grid showing off more highlights from a game’s original trailer. This one also happens to basically have its own experiment in The Automated Show. 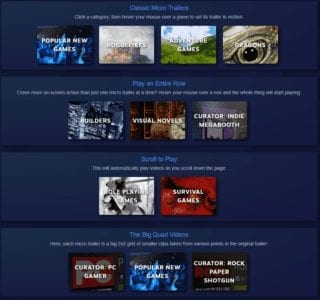 Technically, the last experiment launching with Steam Labs is The Automated Show, but since it seems like more of an extension of the Micro Trailers experiment, we’re gonna mention it now. Like I mentioned before, The Automated Show follows the same 2×2 grid layout that The Big Quad Videos option does. The differentiator here is that this time you get dozens of game trailers from different categories in a row for a roughly 25-minute show. The goal here is to create an easy-to-digest daily showcase of new and popular releases. Each time a new game is showcased, a link to the store page is produced next to it, making that impulse buy all the easier.

It reminds me a lot of that old Tech TV show Cinematech, so it definitely has my attention. Since the whole show is created by a bot, it can definitely end up being hit or miss, but damn if the format isn’t attention-grabbing. There’s something almost hypnotic about watching all the different games flash by. The first broadcast also had at least one bizarre bumper of a woman pretending to type on a laptop that felt very Adult Swim-esque. It’s a weird little easter egg that should reward anyone who happens to watch the whole show. 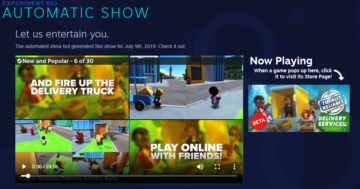 The last offering from Steam Labs is also potentially the most interesting. The Interactive Recommender tool looks at how long you’ve played each game in your library. It then uses that data to tailor recommendations that should match your taste. The tool uses a neural network trained on the data of millions of Steam users. You are then able to refine the results based on what you’re looking for. Want to get in on that smash hit you missed? Slide popularity all the way up. Want to find the next big thing? Move your slider over to only show recent releases. You can also narrow the field down based on tags — or exclude games entirely, based on those same tags.

Right off the bat, the Steam Labs experiment recommended me Metal Gear Rising: Revengeance and Skull Girls, so it seems to know what’s good. The Steam Team made sure to mention that developers won’t need to do anything extra for their games to appear within the Recommender. Since the system works off what people are already playing, rather than an SEO algorithm, good content should naturally rise to the top without a need to game the system.

It’s not without its flaws though. The release date slider tops out at 10 years ago, and the tag system isn’t all there just yet. The Steam Team themselves also noted that it won’t be a replacement for the discovery queue. For new games, no players mean no data to learn and thereby recommend from.  This is doubly true considering just how many games come out on Steam on a daily basis. That said, this could be a really strong system given a little more time. It might eventually become a go-to tool for finding new games to buy. All three of these tools have the potential to help you find your next favorite title.

A step in the right direction

I personally think this is a strong move for Steam, especially with their current competition heating up from the Epic Games Store. Being more transparent and allowing community feedback on potential upcoming features for Steam should make for a better platform overall. It doesn’t solve the bigger problems, like developer revenue split or their nightmarish customer service issues, but it’s a step in the right direction.

Now that you have the breakdown, let us know what you think of Steam Labs. Will you be tuning in to The Automated Show? What game popped up at the top of your recommendations? What’s your favorite Micro Trailer? Let us know in the comments below.