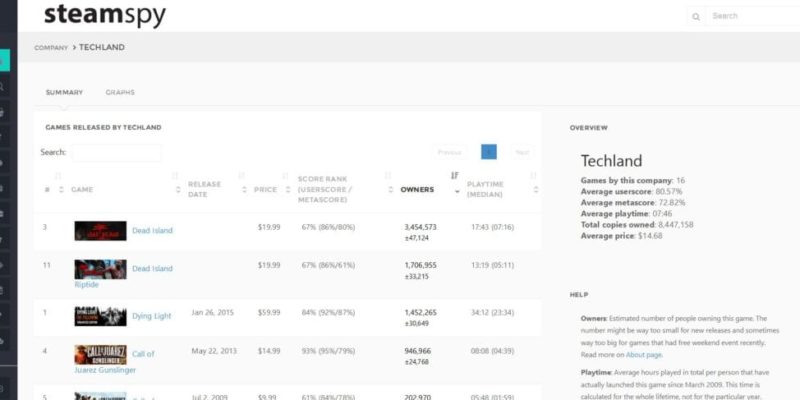 Sergey Galyonkin, the man who runs the Steam data tracking site Steam Spy, has opted to restore information from all publishers to the site. Previous requests from companies including Paradox and Squad (Kerbal Space Program) were honoured, but a recent request from Techland to block their data has resulted in Galyonkin rethinking his approach.

“The point of Steam Spy is to be a helpful tool for game developers. Removing several important independent games from the service will hurt everyone else while not necessarily benefitting the publishers of the removed games,” he writes on NeoGaf. “I want other developers to be able to learn from Techland and follow in their steps. Removing Paradox was already a hard decision for me for the same reasons. Both Paradox and Techland are doing a spectacular job with their games, and I’d hate people to lose this valuable lesson.”

“I’ve talked several times about Steam Spy’s limitations. For once, it’s not a “sales tracking service” it’s merely a polling service, that estimates the number of owners by polling user profiles,” Galyonkin adds. You can read more about Steam Spy’s methodology on the site’s About page.

On twitter, he states that “In the last 1,5 years there were no incidents where developer was hurt because of his data being exposed on Steam Spy.” Following that later with this statement: “The fact that movie industry hasn’t collapsed despite releasing box office numbers gives me faith that games industry will survive as well”.

As a result of Galyonkin’s decision, data for Paradox and Techland titles (and others, like Squad) have been restored to the Steam Spy site. Whether publishers will respond by switching from ‘friendly’ requests to legal efforts remains to be seen. For now, Galyonkin’s user polling data will all remain out in the open.