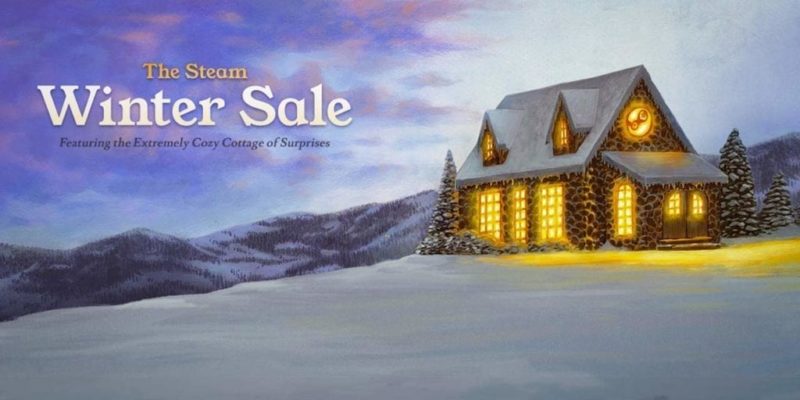 For some PC gamers, a Steam spending spree is only acceptable on two occasions. The first is during the Summer Sale, and the second is when the Winter Sale goes live. The latter is currently live, with thousands of games up for grabs at discounted prices.

Even as a video game reviewer, I couldn’t help indulging in the sale just to treat myself for the holidays. As with any spending spree, you’d want to keep a tight budget so you don’t go overboard. I managed to pick the games I wanted for less than $100. Note that some of my picks completed collections that I already owned parts of. 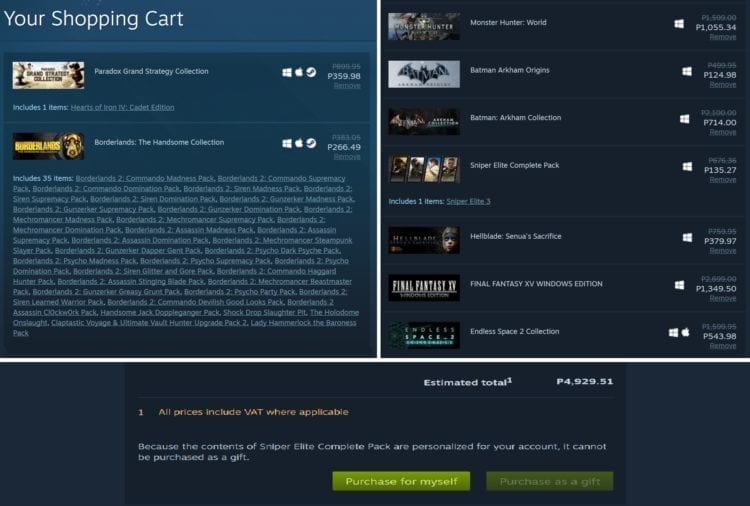 If ever there was a reason to prioritize Steam over other distribution channels, it’s because of regional pricing. I come from a developing country in Southeast Asia which means games are ridiculously cheaper in the Steam store.

The above image shows my haul totaling 4,929.51 Philippine pesos (PHP). That’s just 93.00 USD when converted. As for why I chose these particular games, well there’s a pretty good reason for each of them.

This is only for Hearts of Iron IV. I already had Stellaris, Europa Universalis IV, and Crusader Kings II as you can see from some past reviews. For Hearts of Iron IV, it’s not that it’s a bad game, and I’m sure Paradox Interactive are working hard to provide for long-time fans. It’s just that the third game in the series spoiled me. From enacting a massive pincer maneuver with Operation Barbarossa capturing territories in the Baltic and linking up with the “Desert Fox” Erwin Rommel who blitzed through North Africa and the Middle East, to defending my homeland of the Philippines to the last man against the Empire of Japan — Hearts of Iron III never left me wanting. So yes, it took me years to finally feel the need to purchase the fourth game in the series. 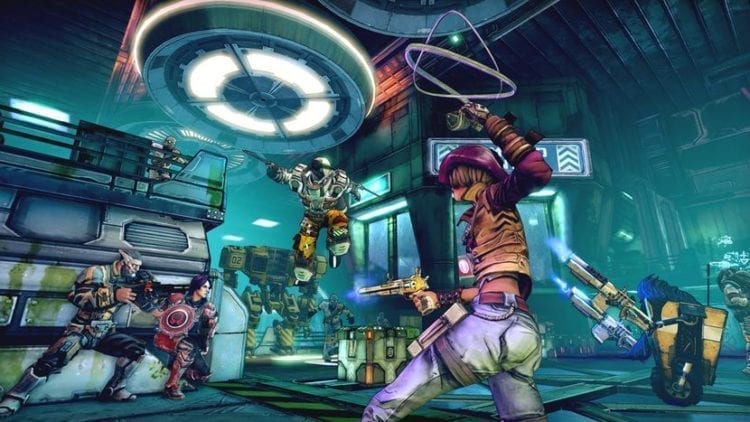 The Borderlands games are ones that I keep coming back to time and again. However, I never felt the need to obtain all the DLC. Likewise, for Borderlands: The Pre-Sequel, I actually had to wait until I found a decent deal for just the base game. Borderlands: The Handsome Collection takes into consideration all my past purchases and slices a lot off the price. All the remaining DLC for the entire franchise came to my lap for just a little over five bucks.

I’ll admit that I haven’t been a fan of the Arkham franchise over the years. While I did play Arkham Asylum years ago, the sequels never managed to grab my attention. Still, it was always at the back of my mind that I would eventually give all these games a try. Today is that day. Also note that I had to purchase Batman: Arkham Origins separately since it wasn’t included in the Batman: Arkham Collection bundle.

This one was just on a whim. I already owned the first two games from way back, and Sniper Elite 4 came in with a previous Humble Monthly. As for the third game, I guess it just slipped my mind when it initially released. Given that I have nearly 1,200 games in my Steam backlog, I’d probably forget some of the stuff I owned and the thing’s I’ve missed out on. 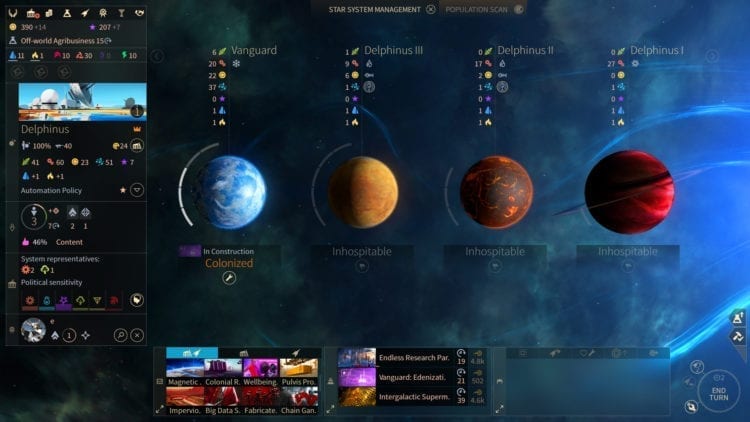 I’m a nut when it comes to 4X and strategy games. Although the Civilization franchise is my go-to for the genre, I did play a little bit of the original Endless Space game from Amplitude Studios. I have a feeling Endless Space 2 will keep me busy right after playing Stellaris: MegaCorp and just before Civilization VI: Gathering Storm launches in February.

Hellblade: Senua’s Sacrifice is oft-considered one of the best indie games released in recent memory. The reason for this is because it provided AAA production values and presentation even with Ninja Theory’s smaller budget. I’ve always wanted to give this game a try so this is the perfect opportunity to do so.

Back when I was playing Destiny 2 on the PlayStation 4, many fans became disappointed with how the game turned out. There were four games that disgruntled players suggested for others to try — The Division, Fortnite, Warframe, and Monster Hunter: World. Of these four games, it was only The Division which I tried but that was fairly on in its lifespan (when Incursion was boring and the Dark Zone had lots of exploiters). As for Monster Hunter: World, I know that thousands of players have fallen in love with it. I guess it’s time for me to see if it’d have the same effect. 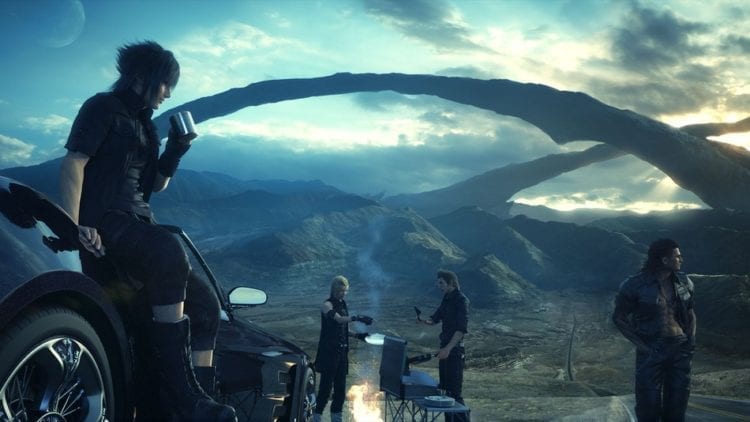 By far my most expensive purchase this Winter Sale 2019, Final Fantasy XV is a game I’ve been itching to get my hands on for a very long time. I grew up with the classic Final Fantasy games for the Famicom and SNES. Likewise, Final Fantasy VI, VII, VIII, and Tactics hold a special place in my gaming heart. There’s just one problem, it’s been years since I last played any game from the series. Too many spinoffs and remakes left me disheartened.

Although I wanted to give Final Fantasy XV a go, I had always wondered whether it’d leave a sour taste in my mouth the way Final Fantasy X-2 and XIII did. Plus, it wasn’t quite cheap when it released for the PS4. With discounts on top of Steam’s regional pricing, I’m finally going to experience the adventures of Noctis and company. 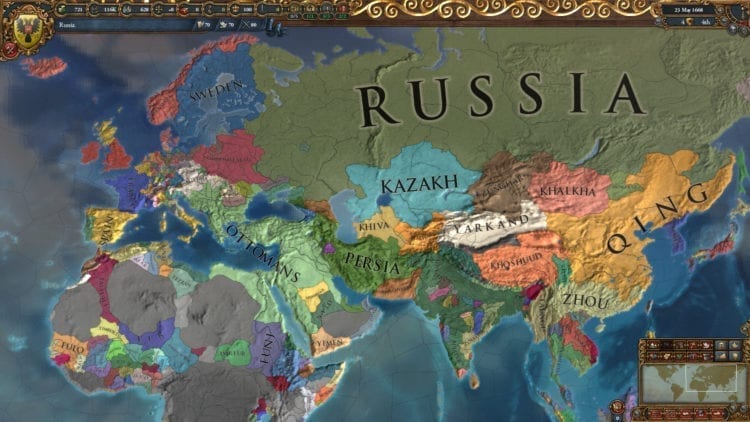 One of the items I regret not being able to purchase earlier was Europa Universalis IV’s Empire Bundle. Although I own the base game and some DLC — including Golden Century which we recently featured — I skipped a lot of the other offerings. The Empire Bundle, which popped up in the past whenever new Europa Universalis IV content rolled out actually contained almost all the expansions. It’s different from the Collection Bundle which mostly has cosmetic DLC. Sadly, the Empire Bundle is no longer available this Winter Sale. I did try to get in touch with Paradox Interactive to see if they’ll eventually add it back in the Steam store.

As mentioned, all of the above games I bought only set me back roughly 93.00 USD. I’d like to find a good deal for seven bucks to make it an even hundred. I’ll probably check back again tomorrow, and hopefully, I wouldn’t feel tempted to dump a ton of cash. Any suggestions?