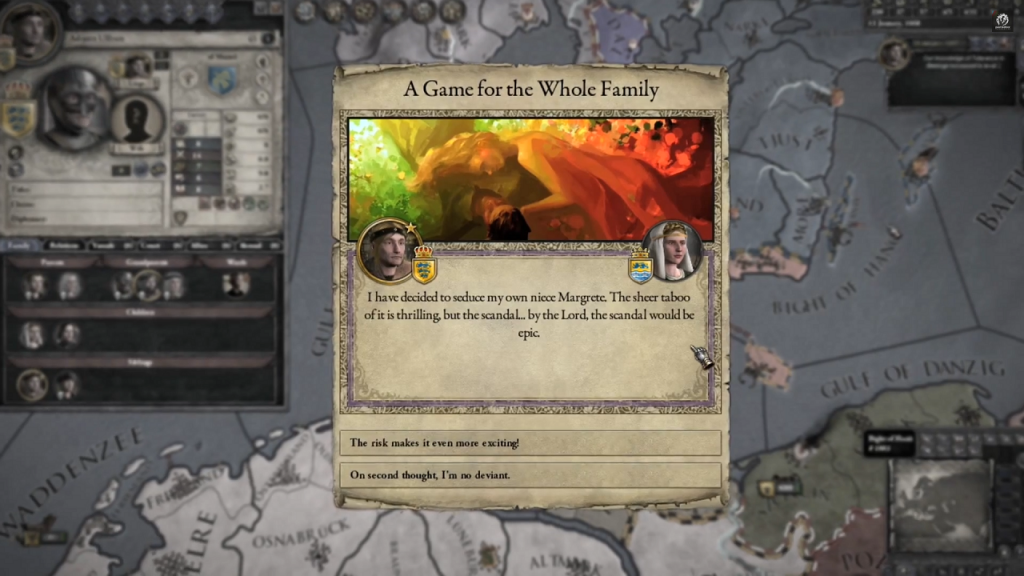 What better way to spend the festive period than with some medieval incest? Mind you, this is the “Way of Life” DLC.

Welcome to the post Boxing Day weekend; a time when literally nothing happens in much of the Western world. Nothing much, that is, except the continuation of the Steam Winter Sale.

We missed Boxing Day, so here’s a quick overview of those Daily Deals (which, handily, are still going on for the rest of the day.) Shadow of Mordor is a game I need to play more of, and seems quite endearing at 40% off. Company of Heroes 2 isn’t as good as the first one, but is nothing to baulk at when it’s reduced by 75%. I’d say South Park: The Stick of Truth looks pretty nice at 40% off as well. Plus, if you like building village ecosystems and stuff, Banished (60% off) might be what you need.

So, that was yesterday. How about today?

I’m going to toss out my usual recommendations for Fallout: New Vegas and Crusader Kings II at 75% off apiece (though surely anybody who wants those games owns them by now.) Shovel Knight gets plenty of rave plaudits, so while I’ve not played it myself, that 33% off will be attractive to a bunch of people I’m sure.

Down in the 12 hour deals section, you can have Starpoint Gemini 2 for half off (quite a decent RPG-space sandbox hybrid thing.) Nidhogg is there at 75% off too, which will be well worth it if you have enough people to play local co-op against.

As usual, there are more deals all over the place. You’ll probably find one to suit your tastes.