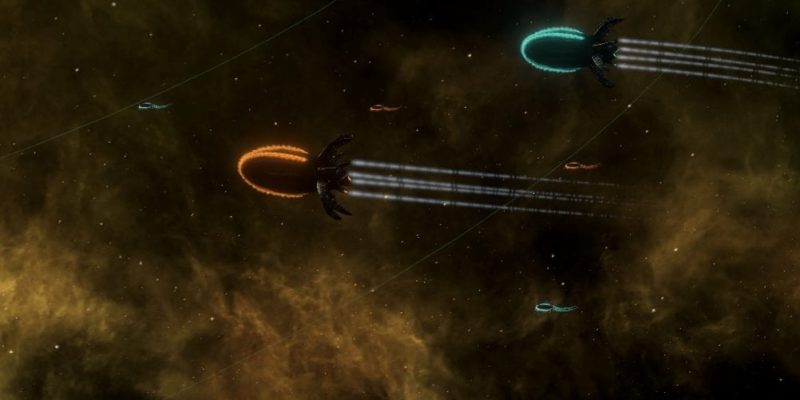 There’s a new Paradox dev diary exploring some upcoming changes to Stellaris posted on the company’s forums. In this fifth installment, there’s talk of tweaking how Space Creatures are encountered and an expansion of Space Piracy.

The 1.3 ‘Heinlein’ patch will be accompanied by an (as yet unnamed) DLC. However, all the stuff written about in today’s update will be coming to the game for free.

Those massive space creatures drifting around the galaxies will no longer be so randomly placed. Their current distribution, say Paradox “failed to really ground them in the setting”. From Heinlein onwards, therefore, the space creatures of Stellaris will have their own regions of space. They will travel outside of these regions, but that will be a rarer occurrence.

In addition, the region of a particular space creature will have “a system surrounded by powerful variants in which a ‘boss creature’ lives”. The Mining Drones, for example, will have a “Mining Drone Home Base”. If you’re able to defeat this, you’ll receive “significant” rewards.

The space pirates of Stellaris will get a similar overhaul to the creatures. Instead of being consigned to that one-off event during the early parts of the game, pirates will have their own region of space and launch periodic raids.

Paradox’s aim with these changes is to make encounters with space creatures “rarer but more significant.” To that end, they’ll also be making changes to the sort of rewards gained through researching or destroying the creatures.