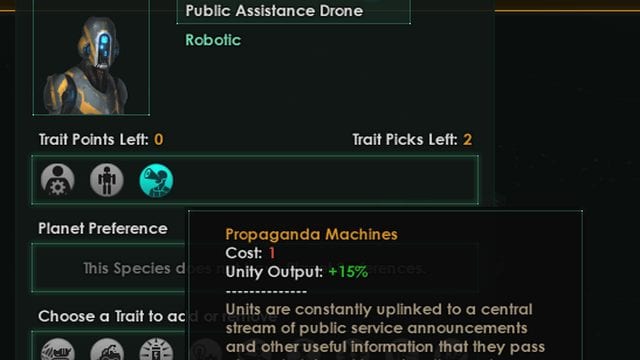 Paradox are back with another dev diary for Stellaris, this time looking at some robotic changes coming in update 1.8 (Čapek). All of the things talked about in this particular post are free inclusions that everybody will receive.

When 1.8 is released (still no estimate on that as far as I’m aware), it will be possible to research a technology called ‘Machine Templates’. This will allow your empire to create different robot ‘models’ through a process similar to genemodding. Robomodding, if you will.

You’ll get one robot trait point to spend by researching Machine Templates, and can earn more through further engineering research. The trait points can be applied to different bot templates. An example trait highlighted in the linked blog post is called ‘Propaganda Machines’ and turns the robot into a machine that will boost unity output by 15%.

Once a template is created, it can be used to build robots of that type on all of your Stellaris planets. There will also be a way to convert existing robots to the new designs.

Paradox add that because these new systems will make Robotic Pops (and Synthetically Ascended Empires) stronger, they will be doing a balance pass on 1.8 as well. Other ascension paths may get buffed in kind.

From 1.8 onward, robots will be easier to build en masse on planets as well. A planetary UI change will allow players to build multiple Robot Pops for several tiles at once, saving you some clicking.