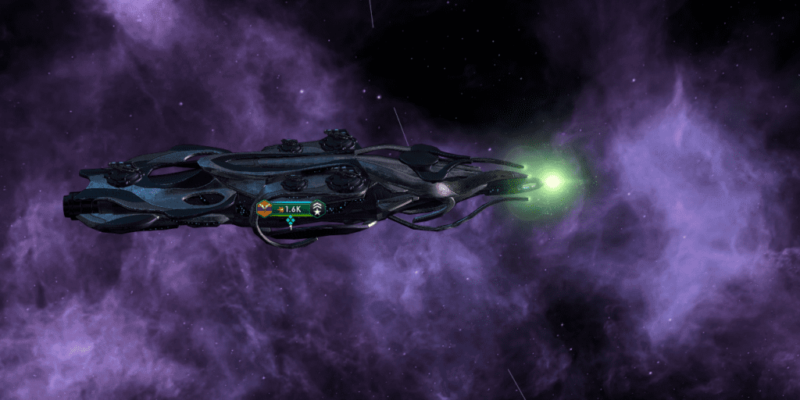 Those who’ve been following along will know that Stellaris is set to get some pretty substantial changes with the Heinlein 1.3 patch (due around October). A new dev diary from the people at Paradox talks about how ships (and by extension combat) will be re-balanced in 1.3.

The early days of Stellaris found Corvette swarms (if I’m recalling correctly) to be overly powerful, so these changes are aiming to prevent something like that reoccurring. In 1.3, ship types will have more unique combat ‘roles’.

Corvettes will be small, aggressive ships with torpedoes and high evasion; useful against Battleships. Destroyers will be the defensive Corvette-counter, with anti-torpedo point defense and a bonus to the new ‘Tracking’ stat to help shoot down evasive craft. Crusiers will become aggressive ‘glass cannon’ type ships, able to hold torpedoes or strike craft. And Battleships will be the durable vessels who fight from a distance, and the only ships that can equip the new extra large weapons.

As mentioned above, Tracking will be new to Stellaris in 1.3. “Each weapon will have a Tracking value that determines how effective they are against ships with high evasion. Every point of Tracking reduces the target’s chance to evade that attack by the same amount,” say Paradox. In general, the larger the weapon, the worse they are at tracking. However, the larger weapons now have much greater armour penetration than smaller arms. Missile weapons will “no longer ignore evasion”, but will have very high tracking values.

Heinlein will also introduce some new ship slots. The aforementioned ‘extra large’ slot will be for Battleships only, while torpedoes will get their own special slot designation too. An ‘auxiliary’ slot will fit “components that have ship-wide effects, and point-defense weapons get a separate slot type as well.