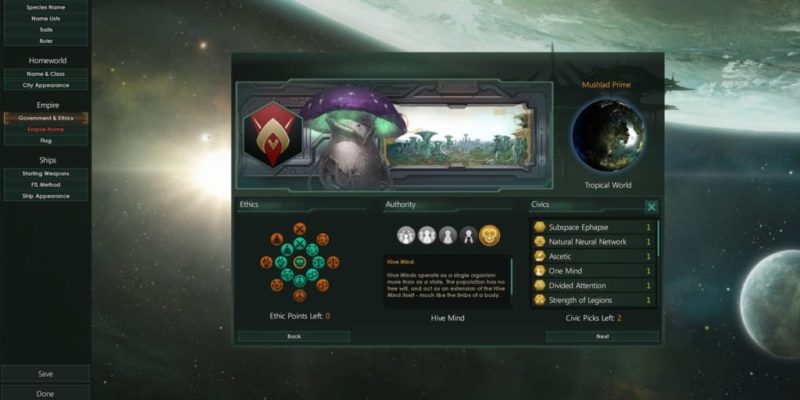 A new Stellaris developer diary talks about some changes and (hopefully) improvements to Hive Mind empires in update 1.8. That patch doesn’t have a release window yet, and as 1.7 is still in beta testing it’ll probably be some time.

Nonetheless, when 1.8 (‘Čapek’) does come out, it’ll give Hive Minds some mechanical and narrative attention. Those who own the Utopia expansion for Stellaris will probably already be aware that while Hive Mind races fulfill their function as a bypass to internal politics, they are a bit lacking in flavour. Paradox say they’ll be giving plenty of attention to changing, rewriting, or removing various events to better fit the unique nature of Hive Minds.

Mechanically, the ‘sprawling slums’ tile blocker will be replaced with something more appropriate (they don’t reveal what, exactly), and a “new system for relocalising technologies based on government authority types” has also been created. New and unique interactions are promised too.

Non-Hive Mind pops will function a little differently, too. You still won’t be able to integrate them into your society as regular citizens, but Hive Mind factions will be able to keep them around as ‘Livestock’. Not a particularly welcome fate, I’d imagine. A new citizenship option called ‘Assimilation’ is coming as well, for those who want to forcibly welcome pops into their collective. Synthetic empires will get the Assimilation function too.