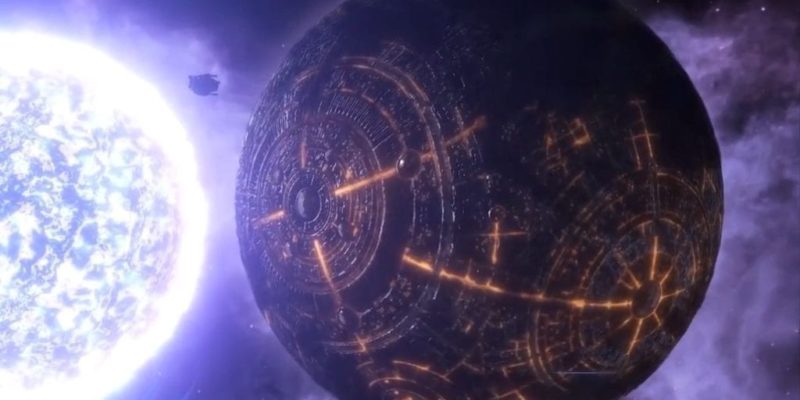 Stellaris: MegaCorp is the latest expansion for Paradox Interactive’s grand strategy game in space. The focus this time around is on economy and trade, with the inclusion of the titular Megacorporations as a unique government type. How will this spacefaring endeavor fare (pun intended) and rank among Stellaris’ other offerings? Will it be a worthwhile investment, or is it bad business? Let’s find out.

Note: For the purpose of this review, I did three playthroughs with the vanilla game and MegaCorp only. No mods; no other DLC active. This is to ascertain what MegaCorp itself brings to the table irrespective of what other content can offer. 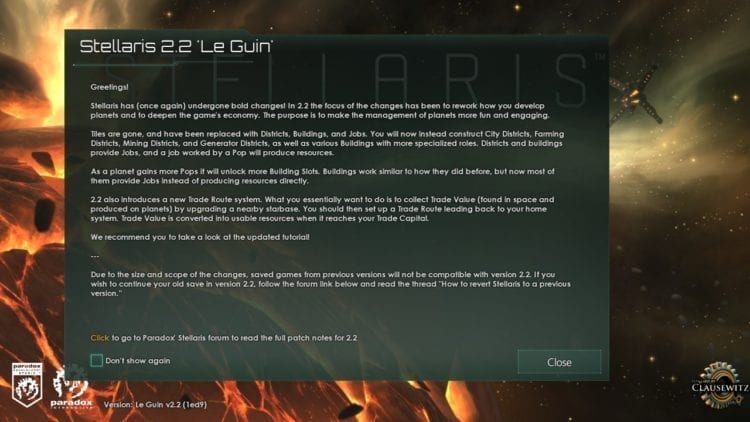 The true star of MegaCorp (as you’ll see below).

Coming back to Stellaris after two years reminded me of what I enjoyed — and disliked — when I last played it in 2016. As someone who’s extremely familiar with Paradox Interactive’s other offerings such as Crusader Kings II and Europa Universalis, Stellaris felt like that younger sibling who lived under the shadow of giants. It had moments of brilliance which, sadly, were lost in the tedium of the mid to late-game experience.

Fast forward to the present and the game welcomed me with so many new features and reworks that I sat for around ten minutes with my mouth agape. Paradox’s team have truly done wonders to make the game feel more dynamic as time went on.

The biggest change is, of course, your planetary and resource management that’s part of the free 2.2 “Le Guin” update. Things are quite different nowadays. You need to work with four districts — city, generator, mining, and agriculture. Your population works in the background to generate resources for you depending on their priorities and the structures you’ve built. These are automated, including how the default minerals resource would be turned into alloys, or consumer goods turning into research or unity and whatnot. Certain mechanics such as unemployment, jobs, housing, stability, and the like also had tweaks. All of these means having to relearn new concepts from the ground up. 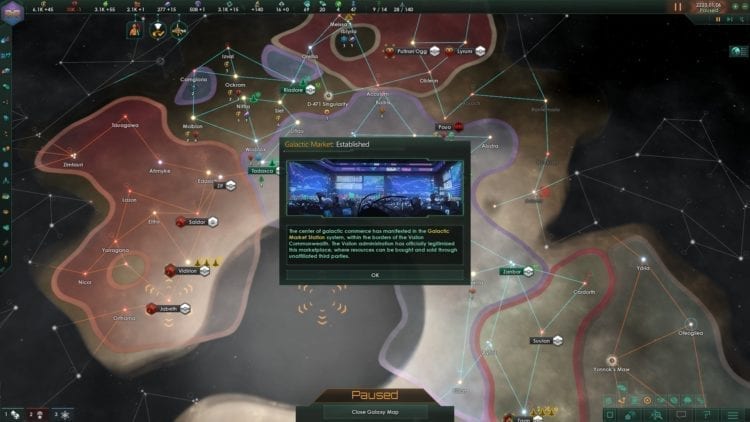 Another new feature for the 2.2 “Le Guin” update that coincides with MegaCorp’s release is the Trade Market. It starts off as an internal market for just your empire. Once you discover at least half of the sentient species in the galaxy, you can turn it into a Galactic Market. You’ll be able to trade goods easily (including slaves if you’re a corporate entity) and even set a monthly trade deal.

It actually took me a while to figure out how to even establish that. I ended up looking at videos and dev diaries, and letting the game progress further — then I realized I could do that via a planetary decision.

In any case, it’s an absolutely fantastic feature to have in Stellaris, something that’s a long time coming. Indeed, it should have been in the base game a long time ago.

Making a Megalopolis in Stellaris: MegaCorp 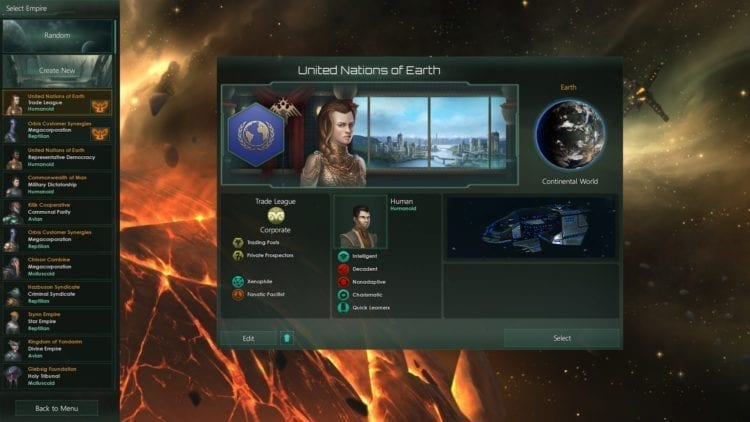 Getting the right traits and civics means more success for future dealings.

Given that Stellaris: MegaCorp’s focus is on trade and economy, you’ll no doubt want to try out the Corporation government type. Corporations have extra Administrative Capacity (the value that coincides with your empire’s size, reach, and stability). The downside is that they get an even bigger penalty due to your empire’s size. This means you’ll want to “play tall” for the most part — basically focusing on fewer but more prosperous systems. Going beyond this cap stunts your empire’s growth and ramps up the costs of various tech, leaders, and more.

For my first two playthroughs, I chose the Orbis Customer Synergies — the first one with default settings, the second with minor edits to traits and civics. For my third and final playthrough, I just edited the United Nations of Earth to be a corporate powerhouse. Suffice to say, you’ll enjoy the new customization options for MegaCorp since they’ll add more variation to your choices.

Branching Out in Stellaris: MegaCorp 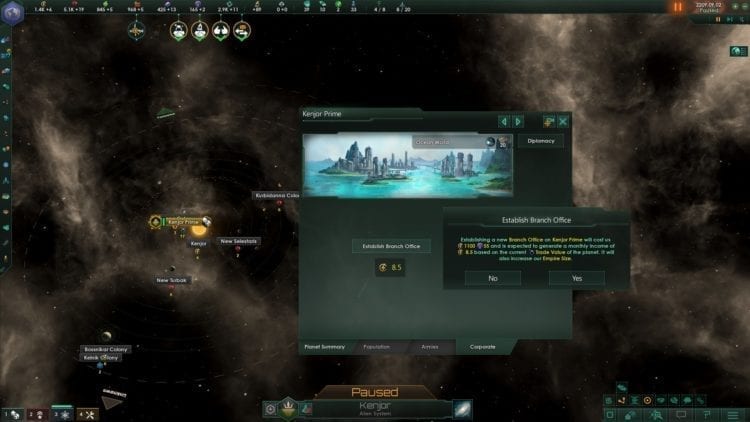 The main hook for races with Corporate Authority beliefs is that their ability to build Branch Offices on the planets of other empires. These provide energy and other resource gains per month. In many cases during the early to mid-game, homeworlds only provide six to eight energy per month, although you can build additional corporate structures. This means it will take quite a while for your investment to pay off.

Another issue is that you’ll need to sign a Commercial Pact before you can even get started and AI empires have a base reluctance of -50 already. Your ethics and traits — and theirs — need to align or you’ll have to sell an arm and a leg just to have an agreement. That’s one of the reasons why I switched to a customized empire to ensure I’d be buddies with a number of AI wanderers, and even then sometimes you’d just hit a brick wall. 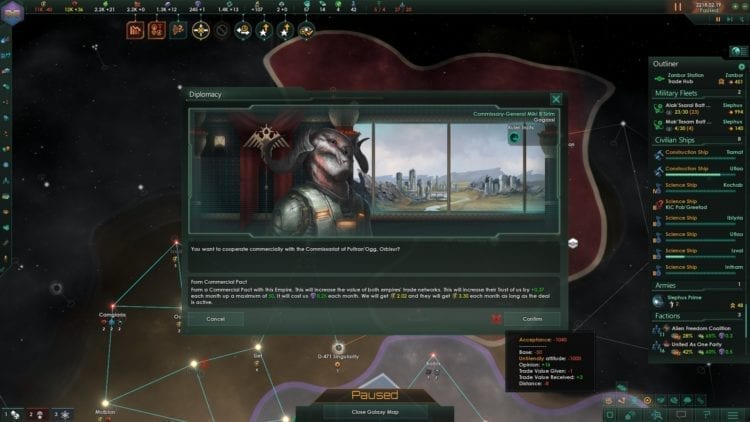 Brick walls in the form of -50 base reluctance and additional -1000 malus.

Other key traits you can try out in future playthroughs are those focusing on a criminal syndicate (Criminal Heritage), spiritualist corporation (Gospel of the Masses), or enslavement (Indentured Assets). These provide unique twists to your playthrough as well as new Branch Office corporate buildings. In the case of Criminal Heritage, you don’t even need Commercial Pacts anymore, just no war or truce with the AI empire. Your focus, though, would be on system-wide crime to gain more Trade Value.

Oh, and fair word of warning since we’re discussing trade agreements: system trading is frustrating. You can have all the pacts, economic cooperation, and trade federations in the universe. Unfortunately, the AI still wouldn’t give up an undeveloped system that’s blocking your hyperlane. 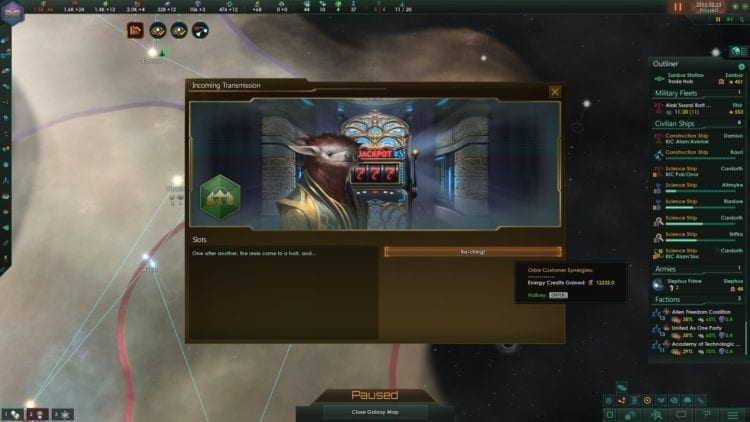 One more new feature in MegaCorp is the inclusion of trade caravans that provide new tools and resources in exchange for something else. Some deals might be worth it, and others are questionable (ie. strategic resources in exchange for four pops on a planet). Caravaneers can drop by your territory from time to time. Sadly, they can also be annoying if they offer you the same deals over and over. At one point, the Racketeer Group kept offering me ships for 200 minerals. I accepted at first but the event/decision kept firing. I assumed the only way I could get them to stop was once I reached my max Naval Capacity.

You’ll also be able to have fun with some “loot boxes” in Stellaris. Using energy (the basic unit of the galactic economy), you can buy “CaravanCoinz” to play the Slots or open Reliquaries. Rewards include various resources in the tens of thousands.

These are simple dialogue decisions and not an actual minigame. It almost feels a little too tacked on and gamey for the most part, but it can save your empire when you’re in a jam. It’s like having a console command in an actual in-game event/decision format.

My third mostly-made-from-metallic-alloys rock from the sun.

You’ll be focused on capturing prosperous systems, building pacts and Branch Offices, keeping the peace, and taking advantage of Trade Value as you progress in your playthrough. Once you reach the latter stages, you’ll finally be able to take advantage of other new inclusions such as brand new megastructures and terraforming your planet into an Ecumenopolis — a planet-wide city (like Coruscant or a Warhammer 40K hive world). You’ll have to remove all other districts save for cities and have a ridiculous amount of resources.

Your journey to getting there, though, might become too rote an experience. While there are a handful of civics, traits, and policies to consider — like the aforementioned Criminal Heritage which vastly changes your style of play — a majority will give way to some of the most optimal choices. These are obviously the ones which increase your Administrative Cap, trading capabilities, and research. Likewise, given that you’re going to rush to get the Galactic Market established, your playthrough might end up similar to the ones I had. That’s building tons of Science vessels, sending them further afield than I normally would, discovering alien races, locking sector chokepoints, then cherrypicking the bountiful systems and connecting your trade routes. So yes, it makes for something most Paradox grand strategy fans dislike — border gore.

I’ve mentioned energy a few times, and it might be worth adding that for an update/expansion that’s focused on the economy, we still see questionable design choices such as RNG-based leaders which you need energy to recruit. Don’t even get me started on the randomized tech/research mechanic which, apparently, hasn’t changed in two years. I know that CaravanCoinz is making fun of RNG in loot boxes, but I’d much rather see overhauls to Stellaris’ own RNG-based mechanics. 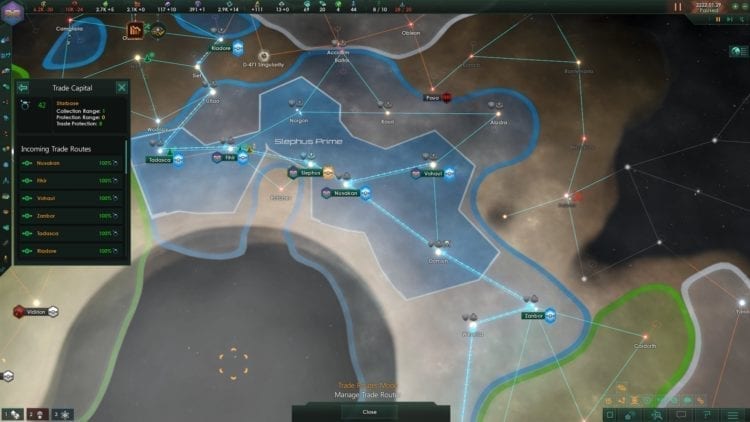 This game teaches you that being rich makes you (and your populace) happy.

Stellaris: MegaCorp is not a bad expansion but it’s not great either. It has the ingredients that many veteran players would like to spice up their playthrough. However, I don’t view it as an integral “first purchase” for anyone who’s new to the game. Multiple vanilla + MegaCorp only playthroughs showed me that the free 2.2 “Le Guin” update itself already adds so much more to change the dynamics of the base game.

MegaCorp itself feels like something for long-time players eager for a fresh (and slightly rote) experience unless you go the route of a galactic syndicate. Like the accompanying new and quirkier advisor types asking if anomalies can be monetized, the novelty does wear off when playing as a corporation.

Still, if you’re a long-time fan of Stellaris and you have most of the other DLC/expansions, then MegaCorp is a worthwhile purchase. Likewise, you can also support Paradox in churning out free updates for everyone.

If you’re a newcomer or someone who’s yet to explore the galaxy outside of the vanilla game, you might look into DLC and expansions that add more to the core experience and not necessarily one that focuses on specific governments or civics. 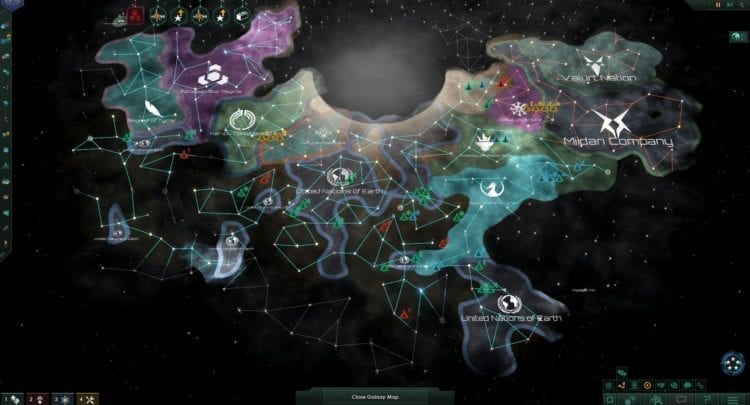 Border Gore: There’s a chance your corporate empires will look like mine.

MegaCorp is a decent inclusion to Paradox Interactive's spacefaring strategy sim. Sadly, it can be overshadowed by what the free update already provides to the core Stellaris experience.

Bungie Made Volundr Forge Easier; Here’s How To Beat It