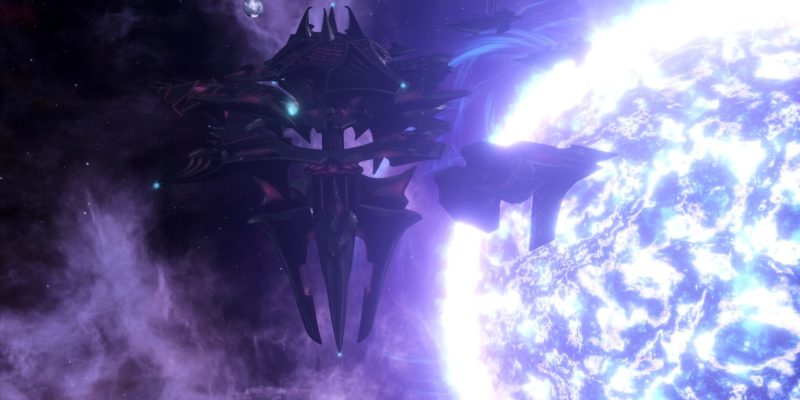 Stellaris has been out for over four years and Paradox Interactive has provided several content addons for it. Fast forward to the present and there’s a brand new DLC that just recently became available, the Necroids Species Pack. Still, the question remains: is it worth it?

Paradox has been known to release DLCs that mostly give extra flavor and fluff. Stellaris isn’t the only one to have these features since other grand strategy games such as Crusader Kings II, Europa Universalis IV, and Hearts of Iron IV have had these from time to time. The gist, however, is that Stellaris: Necroid Species Pack does a lot more than just offering fluff. It creates a refreshing experience that almost feels like a mini-expansion of sorts.

Stellaris: Say hello to the Necroids

Stellaris has expansions that change a major facet of the game. Examples include MegaCorp, which introduced changes to the economy, and Federations, which was more about diplomacy. Likewise, there are DLCs of various odds and ends such as “Story Packs” that add more event chains. As for “Species Packs,” the game initially had the Humanoids Species Pack and Plantoids Species Pack. Let’s just say these DLCs did nothing more than provide you with new portraits, ship designs, and advisor voices.

Then, last year, we saw the Lithoids Species Pack. The addon felt like a step up since the Lithoids actually had their own mechanics. Well, if they seemed unique, then the Necroids are on a completely different level. The Necroids Species Pack nets you the usual alien portraits, ship designs, advisor voice lines, and the like. However, it also goes above and beyond that thanks to three new civics and the Necrophage origin. 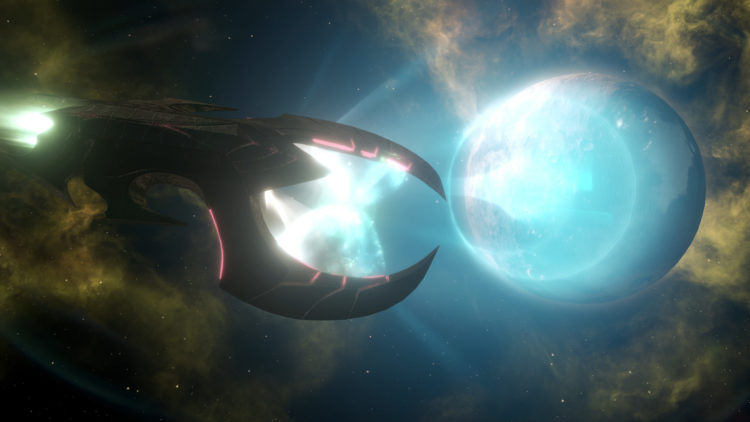 Death Cult and other civics

The three civics introduced in Stellaris: Necroids Species Pack are Death Cult, Memorialists, and Reanimated Armies. The Death Cult civic (available if you have the Spiritualist or Fanatic Spiritualist ethic) lets you have Death Priests and Mortal Initiates. Both help increase research, but your Mortal Initiates can also be sacrificed in return for empire-wide bonuses. Think of this as Aztec sacrificial offerings… in space. Oh, but this civic can’t be used by those who’ve selected the Necrophage origin due to certain mechanics which I’ll discuss in a while.

As for Memorialists, you can build shrines and sanctuaries on tomb worlds and relic worlds. Death Chroniclers even help with your unity and research. Lastly, the Reanimated Armies civic replaces your military building and turns it into a Dread Encampment. This allows you to recruit undead armies. I personally wasn’t too giddy about this since Stellaris is predominantly about spacefaring exploration and ship combat; boosting armies was never truly a focus during your campaigns. 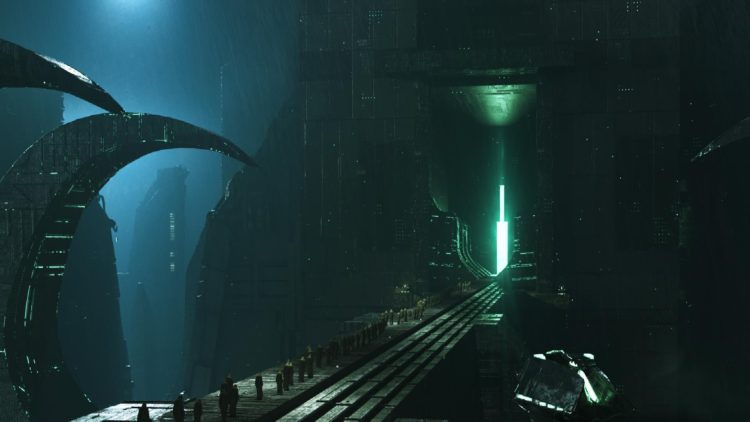 Speaking of the undead, let’s talk about the Necroids and the Necrophage origin. Now, to clarify, while the Necroids do look like undead monstrosities (i.e., vampires, skeleton warriors, and other creepy-looking aliens), they act more like parasites.

If you choose the Necrophage origin, you’ll see one of the most ridiculous sets of effects that offer refreshing mechanics. You start your Stellaris campaign with a secondary prepatent species. Story-wise, these are like the “hosts,” clueless lifeforms that were eventually supplanted and overtaken by your primary species of “parasites.” Indeed, the Necrophage origin passively converts the populations (pops) of other species into your primary selection. 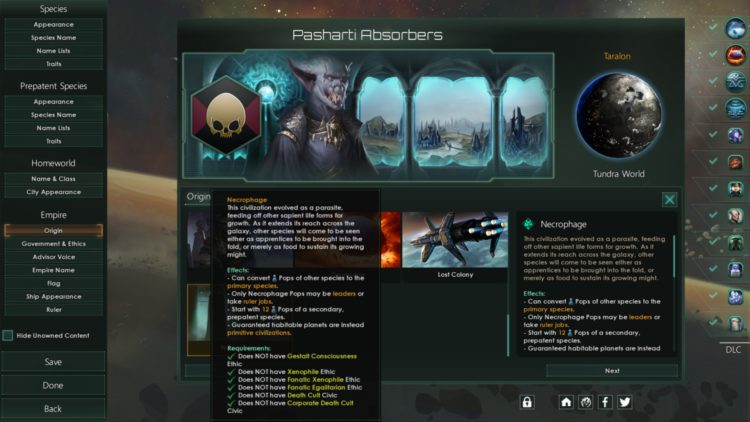 It’s also worth noting that the Necrophage origin isn’t limited to just the Necroid appearance. You could practically have humanoids, reptilians, and various other races in Stellaris begin the game with the Necrophage origin. If you pick that origin, the Necrophage trait also becomes mandatory and it’s ridiculously powerful too. The trait increases your leader’s lifespan by a whopping 80 years while providing boosts to ruler and specialist resource output and population upkeep reduction. The downside, however, is that your workers have lower resource output and population growth is severely hindered.

Still, if you play your cards right, you can completely nullify those downsides thanks to the Necrophage origin’s unique mechanics. Plus, when you combine the Lithoid appearance and Necrophage origin, you’ll get insanely high leader lifespans. You probably won’t need to replace any character for the next 120 years in your Stellaris campaign. 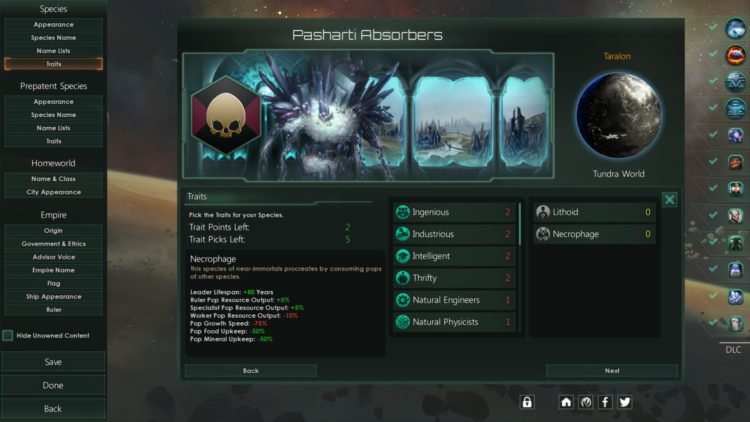 The Chamber of Elevation

At the start of your Stellaris playthrough with the Necrophage origin, you’ll notice that the prepatent species is still around on your home planet. However, because of the Necrophage factor, they’ll slowly become assimilated and subsumed. In turn, you’ll get a population increase for your primary species. There are two ways of going about this: the nice and friendly Chamber of Elevation or outright purging.

For the Chamber of Elevation, this is viable if you’re not a Fanatic Purifier (i.e., someone who wants to kill every Xenos you encounter). When you have this building constructed on a planet, a segment of the populace willingly converts to become one of the soulless living dead. 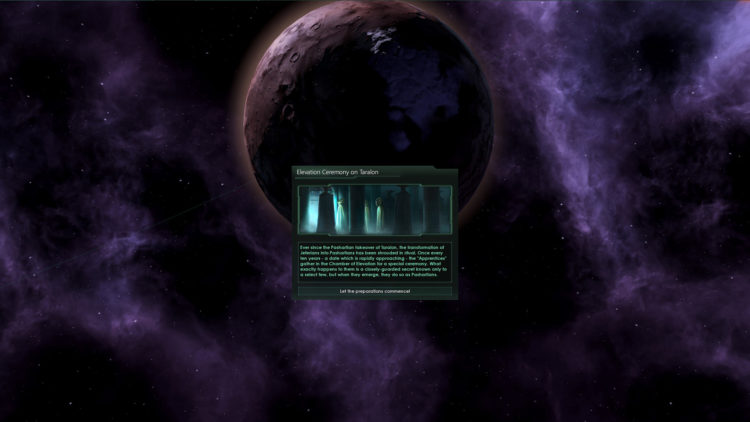 With all-out warfare and hostility against other alien races, the ones that aren’t part of your primary species are automatically considered as “undesirables.” What this means is that, if you select the Necrophage form of purging, you’ll see their pops slowly get subsumed as you progress. 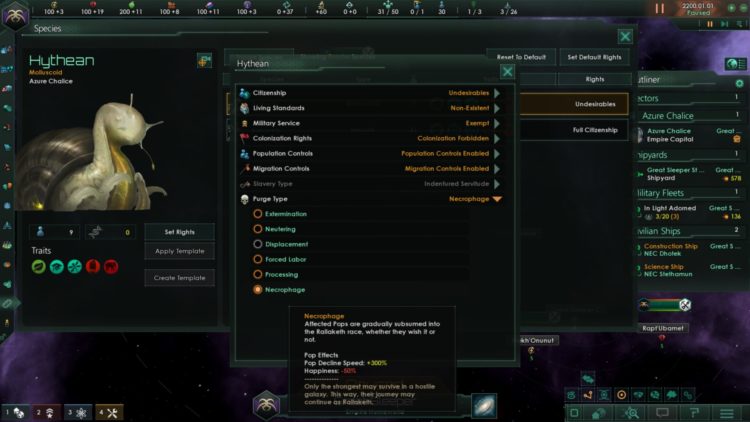 As a spacefaring empire of parasites, you can lay waste to primitive civilizations on nearby planets. Likewise, when you use an Ascension Perk like Nihilistic Acquisition (allows your orbital bombardment to raid a world), you can add more pops to your empire before invading the said world. Then, once you’ve fully conquered these planets, watch as their peoples emerge as newly-formed Necroids too.

Again, your own primary Necroid species suffers from crippled population growth. But, you’re increasing the number of your kind through the Chamber of Elevation and assimilation via purging. 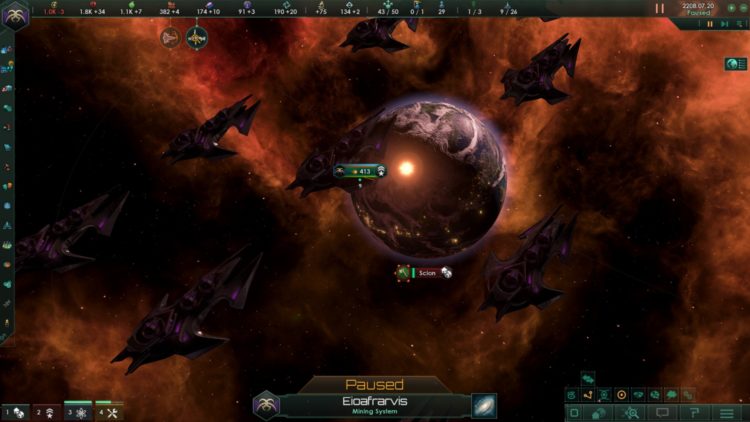 I mentioned using certain combinations of species, traits, civics, and whatnot, but Stellaris: Necroids Species Pack truly offers more room for experimentation. The Necrophage origin only has a handful of restrictions such as not picking the Gestalt Consciousness or the Xenophile/Fanatic Xenophile ethics, among others. Given that, you’re free to check out various combinations like being a Pacifist, Egalitarian, or Spiritualist empire, democracy, or even a corporation. Perhaps you’ll have some luck roleplaying as a traveler of the stars offering a chance at immortality?

My only gripes are related to the micromanagement and advisor voice. Regarding the former, it does become a little tedious due to all the pops that are transformed into Necroids. You’d often find yourself micromanaging your spooky peeps to go back and forth various planets. As for the latter, I was expecting someone who sounded creepier or more terrifying. Instead, the advisor sounds more like a sci-fi ethereal being.

In the end, I do feel that Stellaris: Necroids Species Pack is a step in the right direction for DLCs of this nature. To be frank, one reason I don’t prioritize cosmetic DLCs in Paradox Interactive’s grand strategy games is that they rarely offer a memorable change of pace. However, Stellaris: Necroids Species Pack is such a mechanics-heavy addon, one that provides more than just fluff or flavor. I definitely recommend it to those who are keen on trying out these features. 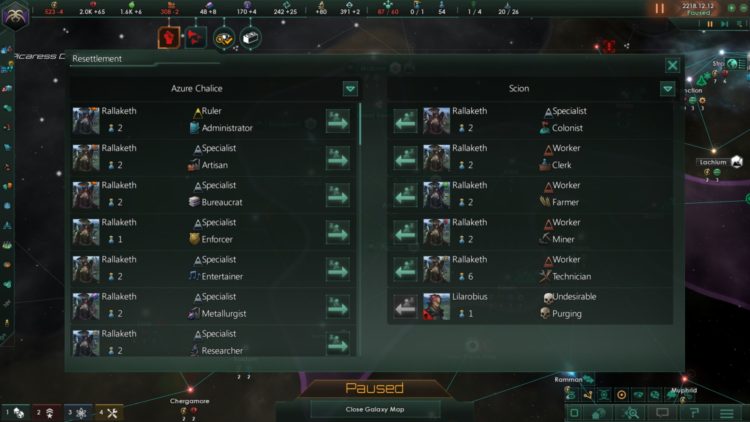 Dragon Ball Card Warriors – How to play, tips, and strategies