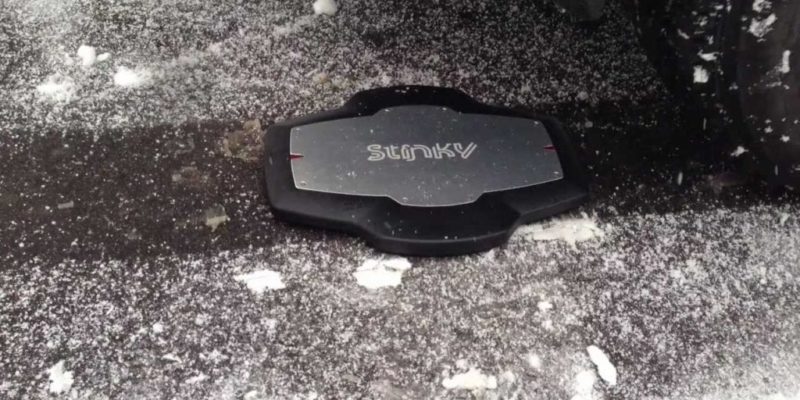 We were born with eight fingers and two thumbs, but imagine if we had an extra hand. That would be pretty good for gaming right? Whether you’re an avid FPS gamer or love your fingers darting around the keyboard at lightning pace in your favourite RTS, there’s always an opportunity to make life easier.

Some of you may remember the Strategy Commander from Microsoft, which can best be described as an extended mouse with loads of buttons and a weird hand device that was larger than today’s modern mice. It slid and rotated! It was sort of the right idea but it’s hard to move away from the traditional mouse and keyboard combo for PC gaming.

Now it’s time for something a little different, a way to give you more control over your games without changing the way you currently play with a mouse and keyboard. It makes logical sense. We only have two hands, however we also have two feet so why not use them?

Let’s introduce the Kickstarted Stinky Board from Canadian company Stelulu Technology. No, it’s not a device for ironing fetid socks or and advanced electronic cheese board, this is a new controller for PC gamers.

The Stinky Board is a pretty slick looking foot controller with a pad which rests on a set of springs inside the foot plate. The pad is divided up into what can best be described as four extra mouse buttons which you can control via the device’s software once it’s installed and connected to your PC via a USB cable.

The Stinky is really well designed with an aluminium plate across the top, and all the inner workings tucked snugly inside a robust plastic case. The tension of the springs inside the board can also be adjusted at the base of the unit and, having played with it quite a bit this week, I’ve found that more tension is always better. At least to handle my big slabs of foot meat.

This video demonstrates how solid the device is.

With four buttons inside the board, my immediate thought was to use the left and right foot switch points to strafe. I tried this with Battlefield 3 but had little luck. Where the Stinky seems to excel, in fact, is with other auxiliary commands such as reloading, crouching, zooming  or lobbing a grenade.

Example of the Stinky being used in Battlefield 3.

The board comes with its own small piece of software to help assign the four pressure points to different keys, depending on what you’re going to play. With a simple 3 screen interface the first section allows keys to be bound to action in a game. This profile can then be saved. It’s a simple device in theory, and the software it comes with does the job with no complications.

Out the box it does support in-game macros but at the moment there’s no way to create your own through the board software. This may be a factor to consider, as it may not be a feature that’s added. After all, having one foot press carry out custom macro actions outside of a game may well be considered cheating in a pro gaming setting.

So is the Stinky really going to enhance your gameplay and give you the edge? That’s a question anyone who is reading this may well be asking; but there’s no simple yes or no answer. We’re all different. The Stinky’s basic functions are fairly easy to understand, but actually making someone a better gamer is dependent on how quickly they adapt to using the board to its maximum potential.

Gamers have been using their feet to dance or even whack a pedal on Rockband for some time, but it’s not intuitive to everyone. My drumming skills in Rockband were OK but not great, and, like me, not everyone’s brain will be able to tune in right away to using foot pressure to activate key presses. However, with practice and some perseverance anyone should be able to take advantage of the Stinky and utilise it for an action they carry out in their favourite game. That’s the beauty of it, because it can be configured to any keypress (single or multiple pulse presses,) gamers can use it in different ways. Even non-gamers may find uses for it with their favourite applications.

Demo showing how to place feet on the board.

I’ve tried it on quite a few titles this week including The Incredible Adventures of Van Helsing where I used it for weapon switching and popping up things like the inventory window, and in Strike Suit Zero; where I had the Stinky switching guns and weapon modes. These are two very different types of game, but there’s always something you can use the Stinky for no matter what the title.

The questions is, would I recommend the Stinky Board? It really does depend on whether you think a extra few fingers could enhance your gameplay. If you’re well coordinated, using the board may come naturally. On the other hand it could take some practice, and that has to be taken into account. Let’s also not forget disabled gamers; this device could be a huge benefit to them.

Stelulu has created a solid, well made product. It’s a great idea that’s simple and functions perfectly, but some may consider it overkill or a bit of a luxury. If you don’t think using your feet is going to be a problem then this could be worth adding to your peripheral collection, but it is pricey at $120USD. So think carefully before taking the plunge.

By Steven Wong17 hours ago
Reviews