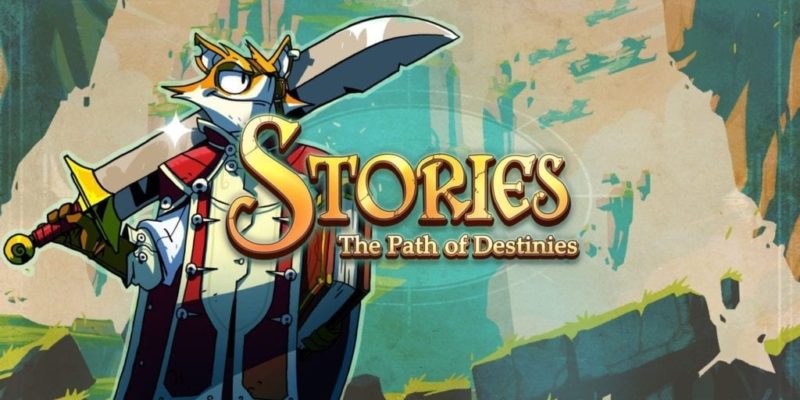 Disclaimer: The following game was reviewed on PC via Steam. A code was provided by the publisher for review purposes.

And so the tale begins…

Reynardo is a heroic fox that suddenly finds himself caught in the end of a major war between an Empire and a group of Rebels. With the vacancy of an emperor who has gone mad, there leaves an open, festering wound of allegiance. And this is just the beginning. As the tale begins to unfold, we gain more knowledge of our protagonist, Reynardo. With a stolen magical book encapsulating a fascinating tales inside. Reynardo flies his ship forward, looking for the ace-in-the hole for the Rebels. Our journey starts to take shape as we also learn of the legendary weapon of the gods known as the “Skyripper.”

This sounds like it’s the secret the Rebels needed but, he also had a friend that tells him he had information about saving the Rebellion that could become useful. So with a tough decision ahead of him, a moment of reflection and inner-struggle loom over his head. The outcome for Reynardo is the decision to help an old friend and war buddy, Lapino. Of course, how could he not respond to an urgent call for help? But, with the decision to help an old ally leaves an opening for vulnerability.

With the move, the Empire now has a chance to obtain one of the pieces of the Skyripper, leaving Reynardo wondering if he’s made the right choice. He did it to be the hero. He saved people! Was it the right thing to do?

Alas, Reynardo now finds himself amidst enemy Ravens, warriors for the Empire. With his Hero sword clasped, he battles through waves of them to find his friend. After saving Lapino, a gambling Rabbit, he was told of a plan that would cause the empire to lose their highest ranking general. A kidnapping reveals plans for the Emperor’s adopted daughter to be taken. Even if she was an acquaintance of his. But nonetheless, it sounded good and would allow the Rebels to face against a much weaker army. But then again, there is the Core to the Skyripper, if the Empire got their hands on this it would complete the godly weapon! The question is… What would YOU do?

As the title might elude to, there is a heavy emphasis on narrative within Stories: The Path of Destinies. While at first glance it may seem like a traditional action-RPG title, there is a lot more here than meets the eye. Where a book may tell the traditional story, you never really see the struggle that goes on behind the scenes that may bring about a specific scenario or interaction that can often be found in traditional storybook tales. In essence, Stories emphasizes the ability to be decisive in the outcome, but to also fill in the gaps of what normal readers would have to discover when reading between the lines.

These are a couple of the choices you have to make in Stories: Paths of Destinies. Each decision has the opportunity to change your fate. At the end of every chapter, the choice is then yours to decide Reynardo’s path. Many, if not most, ending in death. But do you actually die? Or is it just all a big realistic dream? With each death you find yourself waking up, reading the magical book and realizing a new truth to Reynardo’s future. With each truth exposed to him, he now has the opportunity to make a new decision, one that may not result in his death, and a failing the Rebellion.

With each decision that you make you are introduced to a new character. With each character adds harder decisions to make, because being the hero is a tough job. Though the decision mechanic is used throughout Stories, there are still many more traditional aspects about this game that shows its role-playing elements, such as fast paced combat and treasure hunting.

Stories has a very simple, yet immersive combat system. There are dashes, counters and grabs. And even the hook shot delivers a very fun aspect to it all. At the beginning you may feel that the combat and gameplay itself is slow, as I did, but don’t let this keep you from continuing through the game and unlocking more moves and abilities. The combat system reminds me in some ways of the Dark Knight Arkham series with the enemies prompting an exclamation point each time they attack, giving you time to counter. Timing your attack can determine the movement of an enemy, allowing you to land your strike. It may not be the same, but it seems Spearhead Games may have taken cues from it.

Crafting weapons, finding treasure, and searching for gems to strengthen Reynardo is another fun addition to the game. There are four Magical Swords to create, all with unique powers from fire, ice and healing, you have quite a bit of collecting to do when playing to be able to craft everything in the game to use. Using Ore and a few different kinds of Elemental Essence, you can craft each sword which not only allow you different powers, but also gain you access to other areas with more treasure.

The crafting itself is simple and streamlined. Find the materials and the game will tell you when it’s ready to build. I personally like that they added different styles of swords, not only do they help in your multiple quests of death, but they make you look badass while–well–dying.

A unexpected turn of events…

The game isn’t entirely about dying, though, even if you end up doing an awful lot of it. If it’s not from the large amount of Ravens that spawn randomly and get beefier as the game progresses, it’s the fact that most of your decision making results in your death. The games point is to find the right combination that allows you to complete your goal and let you walk away with your life. Though, this has been done in multiple games, giving alternate endings for different decisions that were made early on. The catch with Stories is each decision after your death will add details of what happened when you picked a certain route and its outcome, it will also show you which route you haven’t taken.

Spearhead Game has crafted Stories to have around 32-different endings. And, only one of them being the correct ending that allows you to live. Most games with alternate endings have around 2-4 endings, each being a complete version of the main story. While Stories gives you 31 alternates with a piece missing, and only one with that final puzzle piece. Some other games that come to mind are the FarCry and Mass Effect series that can conclude with two or three variants. Honestly, it’s refreshing for a developer to put the effort forth to tell multiple stories in multiple realities.

Now to the criticism.

Stories was made and optimized to be played at its best with a controller. It will prompt you when the game starts that you should use an Xbox or PlayStation 4 controller. There is a noticeable fluidity when you play the game with a standard console controller. There are some minor movement bugs where your body seems be attracted to an object around you which I think will be fixed prior to release. But, without a controller and using the keyboard, the game just doesn’t feel right. In fact, it creates a sense of heightened difficulty for people that do not enjoy playing with a controller in their hands.

With so many games out today like Dark Souls and Bloodborne, Stories is a much relaxed simpler experience. Even though this game does grow to be more difficult and faster-paced, this doesn’t change that the first two hours of the game are slow. Even if you are circling its beautiful environments.

A story crafted of beauty and intrigue

Stories: The Path of Destinies noticeable takes advantage of the Unreal Engine 4 and its technology. There’s no doubt that Spearhead Games has done an amazing job bringing to life a beautifully crafted atmosphere that makes you feel like you’ve stepped foot on another planet. But after seeing the same area so many times, you wish there were more to the planet to explore.

With Stories being told like it’s being read directly from a book, the narration will immediately set its hooks in your attention span. Though, in some of the many squabbles, the narrator makes the third-person presence feel forced, sometimes even confusing. This is mostly due to the narrator also being the voice for each character, and being the voice of Reynardo. There is simply more variation to be desired in the voice acting department.

Admittedly, there are some funny moments. One being when you interact with the environment (Opening Chests, riding floating platforms, etc.) he will crack a snarky remark as Reynardo about that object like, “Reynardo sometimes has to take his anger out on inanimate objects.” These are the small moments that I thoroughly enjoyed.

Stories: The Path of Destinies, an adventure with fun characters in a beautiful world. Which leads to wanting to play more to find each path for Reynardo’s quest at saving the Rebellion and saving his own life. Though it has slow beginnings, that follow up with some repetition, the game will leave you with questions. What if I would have saved my friend instead of getting the Skyripper? What if I would have only got one piece and saved the girl? Each time you play, it will continue to build a different story, until you’re out of stories to tell.

With a simple yet abstract combat system, a fun sense of adventure, Stories is a step in the right direction for decisive action-RPG’s, but could step up its game in exploration. If you enjoy fun fights and deep compelling story, then Stories: The Path of Destinies maybe the game you’re needing for a quick fix. Stories will be told on April 12th for PC and PlayStation 4.