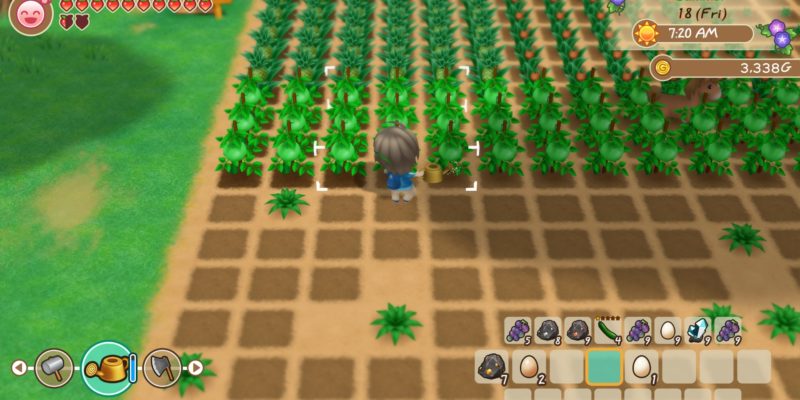 There’s something to be said about keeping things simple, and Story of Seasons: Friends of Mineral Town — the 3D remake of a Game Boy Advance game — certainly does that. While the series itself has made its fair share of changes over the years, this one takes it back to the way things were over a decade-and-a-half ago. Despite its age and comparative simplicity versus later titles and the very similar Stardew Valley, the game is still relaxing, enjoyable, and well worth playing. As long as you don’t get too shocked by its high price tag.

Relatives in farming sims love nothing more than to throw farms at main characters. It’s what they live for. True to form, Story of Seasons: Friends of Mineral Town begins similarly. You pick an avatar from one of four (two dudes and two dudettes) and then you travel to the titular village and get to work. If you’ve played any similar game, you know the drill. There isn’t much of a plot at all. You grow your business, interact with the townsfolk, and, if you’re like me, do a whole lotta fishin’.

Story of Seasons: Friends of Mineral Town‘s presentation is as cute as it is charming. The game does a very nice job of updating the original game’s 32-bit aesthetic with more modern 3D graphics. Not too modern, though. You can run this game on any graphics card released in the last decade, and its install size is only about one gig. That being said, there is a fair amount of detail on display. This is the best the series has ever looked on account of this being the first game made with high definition in mind. 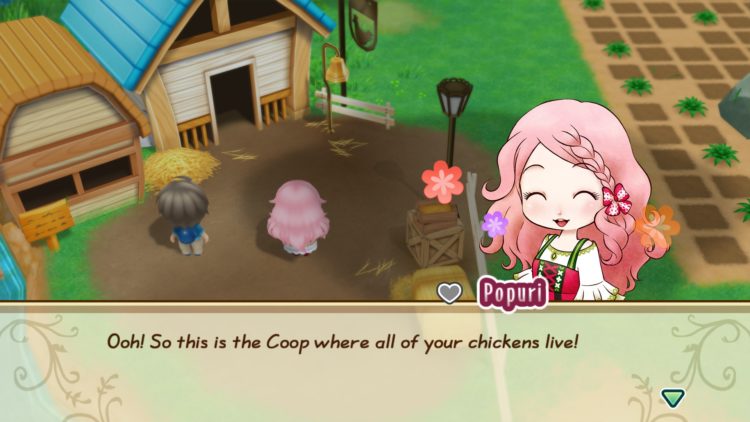 That being said, there’s no voice acting or anything of the sort, despite the emphasis on souping up the look and feel. Character portraits are all brand new and lovingly drawn, and interactions with the villagers are as pleasant and laid-back as they’ve ever been. You can also control the camera a bit while you’re outside, but only a tiny bit up or down. I was hoping for a third-person camera, but top-down truly is the best way to maintain crops anyway.

Meet the new horse, same as the old horse

Considering all the progress the series has made over the years, it’s surprising just how close to the original Story of Seasons: Friends of Mineral Town sticks. Although it’s not all the same. The game combines content from the original release, plus More Friends of Mineral Town. And, much like Stardew Valley, you can now romantically pursue any of the villagers regardless of which avatar you pick. Speaking of which, there are also a couple of new characters to marry. All of the characters now have names in line with the original Japanese, too. For instance, Ann is now known as Ran.

One of the best quality-of-life enhancements, however, is that you can now stack items in your inventory up to nine. A small update, but makes carrying a bunch of stuff much easier. Additionally, there are a couple of new crops and all crops can now be walked over while they’re planted, which means you’re no longer unable to water the plant in the middle. Crops now have quality ratings too, with better quality items selling for more. You can also change into different clothes, which are mostly palette swaps, but it’s something. 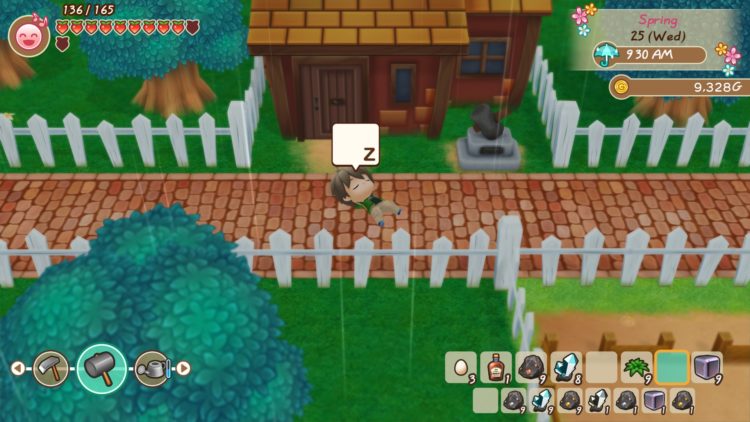 Get busy living or get busy farming

The days in Story of Seasons: Friends of Mineral Town are very much your typical farming sim days. You wake up at 6 AM every morning and you water your crops, tend to your animals, go around giving the villagers gifts, and mining and fishing if you’re so disposed. You start the game with a default set of tools that gain experience as you use them. Get enough experience and they level up, which allows you to upgrade them with materials from the mine. With each level, the tools become more useful by adding additional charge levels that increase the amount of ground they cover or the amount of power they can dish out.

Mining is elementary in Story of Seasons. Two barebones mines exist, where you strike rocks with a hammer for resources and discover ladders going deeper by digging with a hoe. You generally need a single piece of most resources, so it’s not at all necessary to mine regularly. Although you’ll still want to dig deep down for various upgrades. The biggest constraint is your stamina, which can be upgraded by acquiring berries. And they are typically not easy to come across. But you can buy or craft stamina restoration items, plus there’s a spa close to your farm that you can rest at to restore yourself.

Story of Seasons: Friends of Mineral Town is mostly just a nice, relaxing game to play. It’s easy to zone out for hours on end while focusing on your daily tasks and taking care of business. While it’s not the most detailed farming sim around, I’ve enjoyed it much as I did years ago when I played the original. But I mentioned the price tag in the first paragraph. In case you haven’t seen it yet, this game is $50 USD. 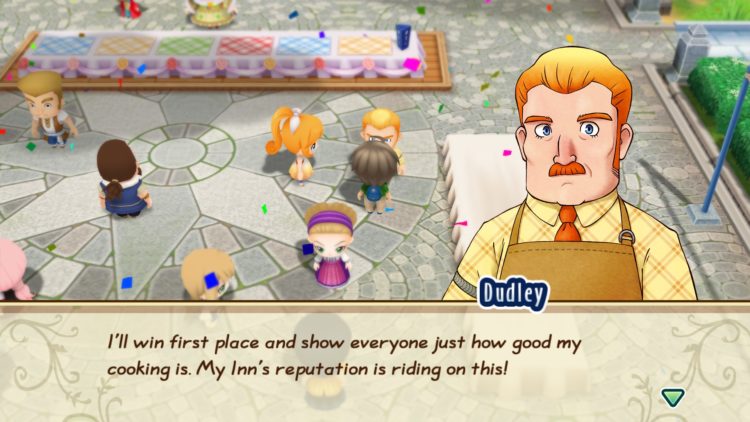 That’s the price you pay

Now, Story of Seasons: Friends of Mineral Town is a damn good time, sure. But, if you haven’t played Stardew Valley yet, the price tag is going to stop you dead in your tracks. The latter game is less than a third of the price, and has more content and infinitely more customization. The 3D graphics of Seasons are nice and all, but I’m not sure that they’re over three times the price of admission.

And similarly, anyone who is already into Stardew might be disappointed coming to Seasons. Granted, the original game is a lot older, and Stardew took the vast majority of its inspiration from it and other entries in this series. But there are far fewer crops, a smaller play area, less to do in general, and a complete inability to design your farm. When you start in Story of Seasons: Friends of Mineral Town, your farm is mostly complete. You can improve buildings and make them larger, but there’s not much flexibility. 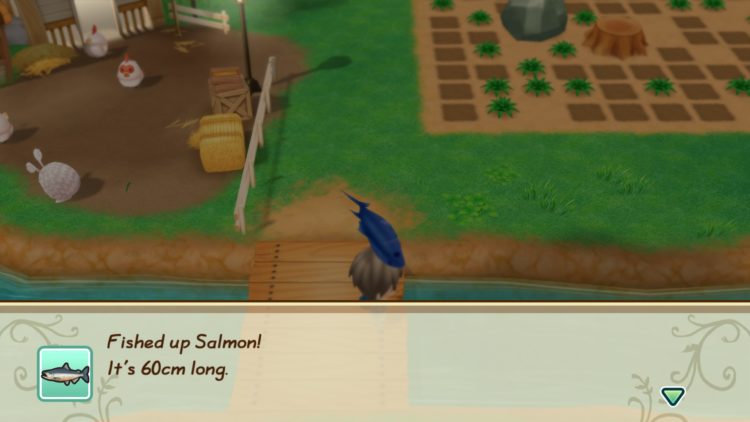 A call to farms

All of that might seem nitpicky, but when you’re asking $50 for a remake of a game that doesn’t stack up against its most famous competitor, I think it’s important to think about. When marketing a game, “who is this for?” is the most pressing question. The answer here is mostly “fans of the original.” And, honestly, they’ll have a great time. It’s the same game they know and love with some quality of life changes and a fresh coat of paint.

While it doesn’t quite compete in the features department, Story of Seasons: Friends of Mineral Town is still well worth playing all these years later, as time has done little to dilute its many pleasures. I just hope that there’ll be some ports of the previous games in the series, as seeing those denser, more complicated games on PC would be very fine indeed. 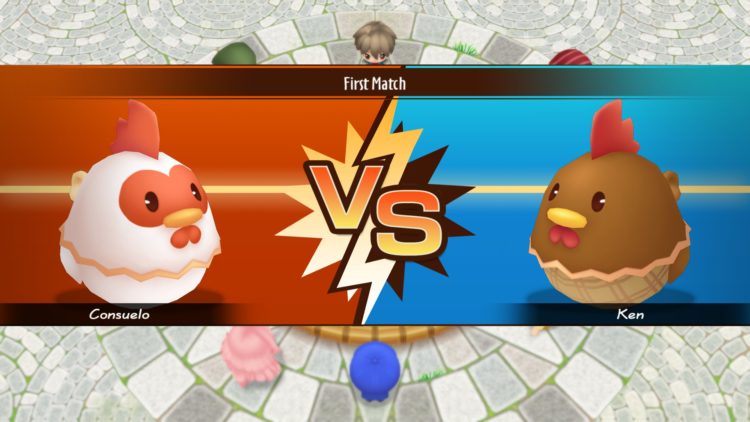 Story of Seasons: Friends of Mineral Town brings a classic back to life with 3D visuals and all of what people loved about it intact. But the comparative simplicity of the game's systems plus the high cost compared to similar games will possibly scare off players who don't already have a soft spot in their heart for the game.