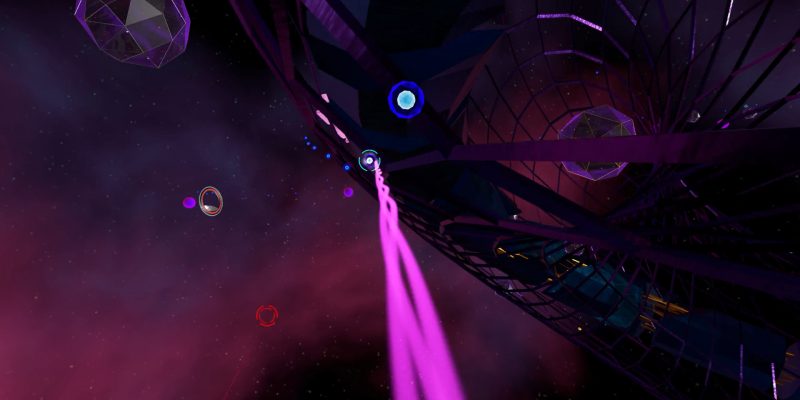 As someone who once aspired to make games for a living, I’ve always been fascinated by the process of participating in “game jams.” If you’re unfamiliar with the concept, it is fairly straightforward. A handful of developers lock themselves in a room together for an extended period of time (usually an entire weekend) just to see what they can come up with. Unfortunately, the game jam teams that I competed on always came up with legitimately awful concepts that I wouldn’t even force my worst enemy to play. Still, there were always a handful of participants that legitimately had something amazing to show for their efforts.

One such title that impressed me during the 2018 Global Game Jam was the futuristic platformer Straylight, from indie developer Dr. Bleck. While the game itself was purely in a proof-of-concept stage coming out of the event, the development team has spent the last two years polishing the title into a full-fledged VR platforming experience, located exclusively in the vacuum of space. Do you have what it takes to single-handedly explore the cosmos, or will you spend eternity floating in interstellar nothingness?

This is a platformer?

Going in, I was under the impression that calling a game like Straylight a platformer was a stretch. Part of the reason for this is because the title is essentially the anti-platformer. That doesn’t make any sense, right? Allow me to explain a bit further. When thinking of traditional platformers, you probably envision the likes of Mario or Sonic, just to name a select few. This is very much not that kind of platforming.

In Straylight, instead of jumping from place to place while also avoiding plunging to your death, you have to lasso your way across the infinite reaches of the unknown. You start the game marooned in the endless void of space, somehow possessing the ability to latch onto stars and pull yourself towards the heavenly bodies. The goal is to transition from star to star, slinging yourself through a series of checkpoints and the final gate at the end of each stage. So where exactly is the platforming in there? At least initially, I envisioned myself as an intergalactic version of Pitfall Harry. It felt as if I only possessed the ability to sling myself across bodies of water, just hoping that an alligator wouldn’t bite me in the ass. The main notable exception to this analogy is that instead of swinging on something which rotates around a single fulcrum point, instead, you are pulled directly towards a star, almost as if trapped in a tractor beam.

Once you’ve locked onto a star, you will begin to slowly float towards the ball of gas. Speed in Straylight is dictated by the velocity and intensity at which you gesticulate your hands. Once again dipping into the Pitfall Harry analogy from earlier, try to think of the process of managing speed as if you were cracking a whip. The harder and faster you move your appendages, the quicker you will move towards the attached star. Just be sure not to get too far away, because there does come a point where you can no longer latch on to them. Though beautifully simple in concept, once you start exploring, that is where the true fun starts. Being able to chart your own path through the virtual cosmos is legitimately freeing. As long as you can successfully attach to consecutive stars and fling yourself effectively, the galaxy is your oyster. While there isn’t any required path that you have to follow to get from point A to point B, it is necessary to fly through a series of checkpoint rings. I mean, it worked for Superman 64, so why would this be any different?

Easily the most baffling part of Straylight for me was understanding why there’s gravity present on each map. Instead of finding yourself following the same linear path in perpetuity, there’s a force continuously pulling you downwards. How that works in a vacuum is a bit beyond my simple brain, but needless to say, it was a bit confusing at first. Mercifully, it didn’t take long to get past this, once I was able to fully suspend my disbelief. But should we be surprised to encounter magical gravity sources? When you’re already swinging around space with countless other odd geometrical shapes, all of which are attempting to make your life immensely more difficult, the answer to that is likely “no.” Fortunately, if you ever do die, restarts are damn-near instantaneous. Choose your own adventure

Probably the most promising aspect of the overall experience was the open-ended style of level design utilized throughout. While there are plenty of scenarios where you will need to follow a single, defined path to progress, I didn’t really enjoy this as much as the stages consisting of numerous stars packed densely together. When there was an oversaturation of the gas balls, it felt more like I was able to create my own fun. Subsequently, this is also when I felt the most in control of traversal as well.

Last, but most certainly not least, is the amusing, AI-like narrator. She seems to be rather blatantly withholding information from you. It’s hard to say if it was the robotic delivery or the shades of GLADOS that I picked up from the dialog itself, but I got the sense that there was something else going on that would be revealed later on in the campaign. That is purely speculation on my part, but it certainly felt like things were going in that direction.

For the VR fans out there, the Early Access version of Straylight has more than enough meat to keep you busy for hours on end. Just the unbridled trial and error process alone will likely end up gobbling far more time than you would ever anticipate. That said, the unadulterated freedom you feel when slinging yourself across space at breakneck speeds more than justifies the time spent trying to explore every nook and cranny of a map. Buckle in, you have a universe to explore!