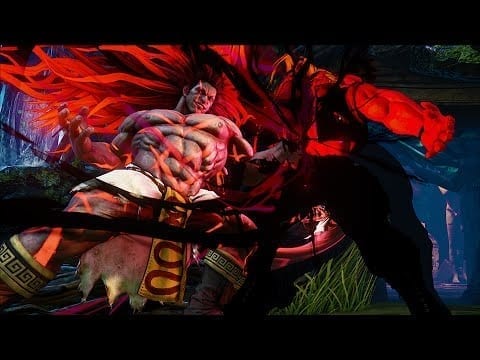 While it’s tempting to call Street Fighter 5’s first brand new character “fresh meat,” he’ll probably tear you apart for it. Meet Necalli, a warrior with mysterious origins and an animalistic fighting style fierce enough to send opponents scurrying off with their tail between their legs.  I mean, come on! The guy looks like Akuma and Blanka smashed together, with some hair extensions thrown in for good measure.

If your play style involves a little less strategy and a lot more smack-‘em-‘til-they-pass-out, you’re probably going to like Necalli. There’s no mercy in those eyes, and he’s more than ready to annihilate anyone that stands in his way. Don’t let the crazy eyes and wild hair fool you, though; there’s a genius in him that’s just waiting to be unlocked when V-Trigger is activated.

Street Fighter 5 is aiming for a Spring 2016 launch.

Heroes of the Storm Leoric trailer

Game of Thrones Episode 5: A Nest of Vipers Review