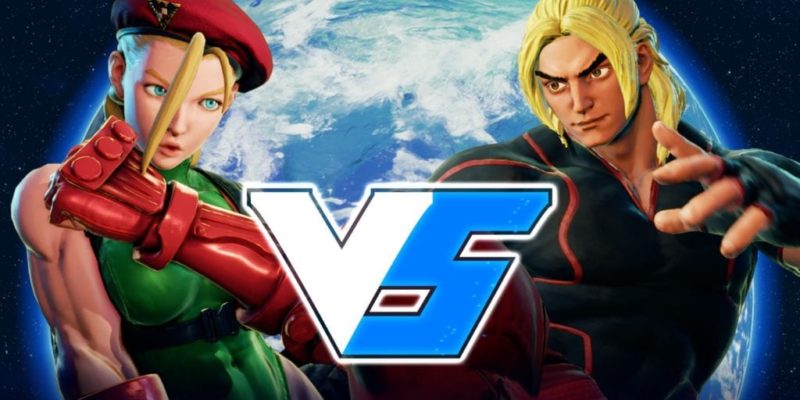 It’s been almost a week since Street Fighter V hit the PC, and after a rather shaky launch, Capcom have done their best to patch up critical issues, stabilise the servers, and generally assuage people’s fears.

Nonetheless, based on my own experience, I really cannot recommend you drop £45 (£45!) on the game at this point in time. 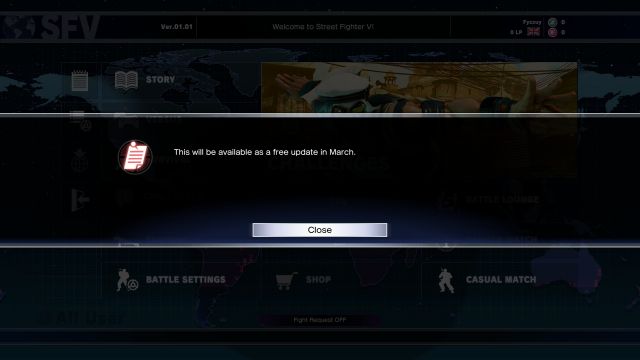 And this is only part of the reason.

On the one hand, Capcom have actually done a pretty good job of listening to the complaints of the PC userbase and are looking to fix up a number of issues. They’re “looking into” (note: not the same thing as “definitely adding”, but still a positive thing) native DirectInput support, key rebinding, in-game language selection, and resolution switching that doesn’t require cycling through them all.

Likewise, the three major updates so far have apparently fixed issues with Fighter ID searches, Fighter IDs being corrupted; and issues with matchmaking, match results, and replay searching. Not only that, but more fixes – usernames not showing up in Rival Search, usernames not displaying properly on the battle results screen, and ranking functionality not working on the CFN – are all promised. 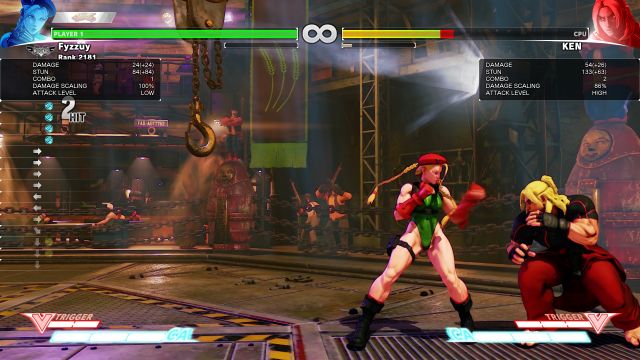 Training mode is pretty neat, at least, though I still wish there was something for intermediate that taught you the basics of the characters. Coming Soon, perhaps?

Good, yes? Yes. It is. While there’s no guarantee we’ll get keyboard rebinding and DirectInput and so on, we are at least not being ignored, and three patches in the space of a week is actually pretty good customer service. Okay, there’s the argument that it shouldn’t need three patches in the space of a week, but I’m willing to let that slide – it’s borderline impossible to test every possible in-game action on every possible combination of hardware, and with the amount of hardware and varied system configurations we have right now, I’m not too concerned about games being patched shortly after launch.

And yet, my experience with Street Fighter V has been pretty bloody dreadful. 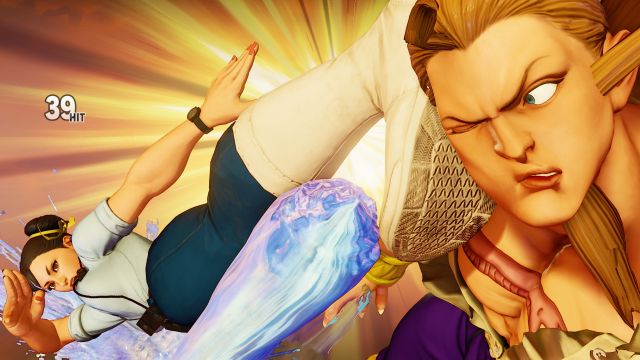 Street Fighter V on the left, me on the right.

Before I go on, this is entirely my experience. I know for a fact that there are people out there who’ve had nothing but good experiences with the game, and hey, good for them. But for me, it’s been a bit of a nightmare from the start.

The first few days, the servers were basically dead on arrival. This is also why the Battle Lounge system currently only supports two players rather than functioning as an actual lounge for groups of players; while it will do that in future, Capcom have stated that lounges for eight players aren’t in the game right now to reduce the load on the servers. Fair enough. 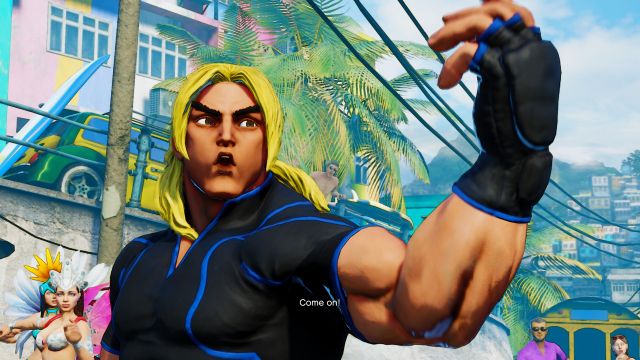 My first online match was actually really, really good. The netcode employed in Street Fighter V is… okay, I can’t remember enough about fighting game netcode to really go into specifics, but it’s the one that’s basically either fantastic or complete shit. If you’ve got a good connection to the other player, you might as well be playing on the same system while sat next to each other. If you’ve got a bad connection, there’s no input delay, but the enemy position will only periodically update, meaning they’ll suddenly teleport into the air or something when they actually jumped a full second ago. This is generally preferable to the netcode that causes input delay or outright reduces the speed of the game when lag occurs (which is apparently what this does if you drop below 60FPS, but that’s something else entirely).

And, yes, my first online match was basically lag free. I got completely destroyed, but it was fun. It felt like I was playing a local match. It was great.

My next three matches were ludicrously, hilariously laggy, full of fireballs appearing out of nowhere and the enemy characters suddenly appearing in mid-air. These were also kinda fun, but for entirely the wrong reasons: no strategy was possible, because I couldn’t see what the enemy was doing until, like, a second after it had been done.

I gave up, noted that Capcom were talking about how they were going to be fixing the server issues shortly, and tried again later. 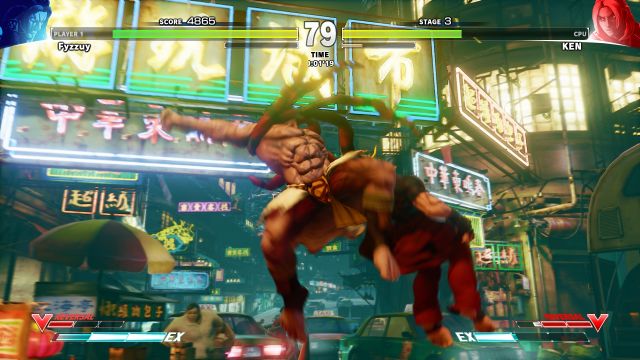 I have no idea what’s going on in this screenshot, but I find it bizarrely funny, so in it goes.

Over the course of the rest of the week, I’d fire the game up for 30 minutes, turn on the find-me-a-match-while-I-do-single-player-stuff, and venture into either Training, Survival, or the (currently kneecapped) Story mode while waiting for it to find me a match. On the second day, I was repeatedly found matches with a connection rating of 1, which were as completely unplayable as the one described above. Ever since then, I’ve had… no matches.

I’ve tried on different days. I’ve tried at different times of day, because sure, maybe there aren’t many Europeans playing at 3am in the morning, but I suspect there are a fair few between 5pm and 9pm at night. I’ve tried manually searching for matches. I’ve tried joining Battle Lounges, only to be told that they’re either full or no longer exist. I tried creating my own Battle Lounge, and was summarily disconnected from it. I finished 30 rounds of Survival without getting a single matchmaking hit. 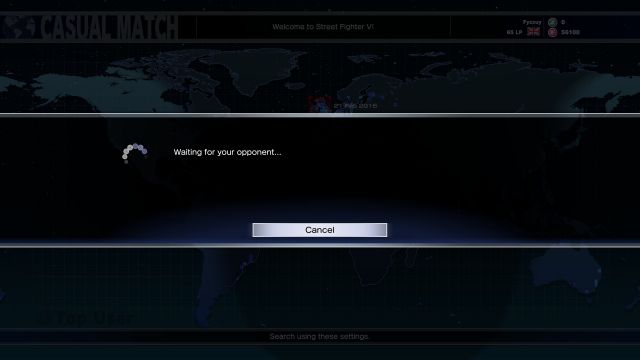 Right now, this IS online play for me.

Maybe this is my fault. Perhaps Capcom’s servers think the Isle of Man is in Australia or something (which has actually happened with online payment systems before, but never a game) and is boggled by the fact that my connection to everyone else on the other side of the world is terrible… but this doesn’t seem likely, because the matches I’ve had were all against people with UK flags in their profile.

Or maybe my connection simply isn’t good enough. I mean, I don’t have a spectacular connection; my upstream isn’t good enough to livestream a game. But that doesn’t seem likely, because that wouldn’t explain why my first match went flawlessly. 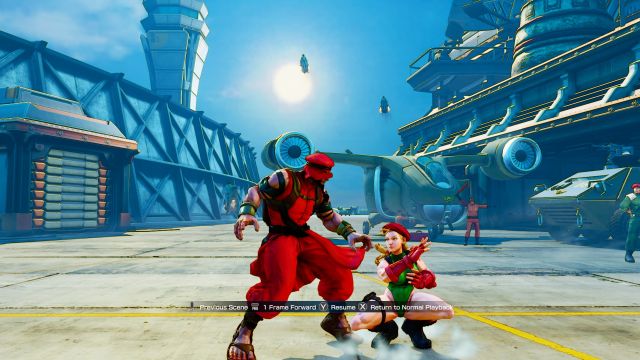 That said, the replay mode is actually pretty great, particularly the way you can advance it one frame at a time. Or just hide everything to get some nice screenshots, if you fancy.

I went over this quite a lot in my pre-launch impressions, but the single-player components are basically all “coming soon.” The Story Mode offers two to three matches for each character, against enemies on the lowest difficulty setting. Survival Mode pits you against up to 100 enemies in a row using a single life bar, although you can spend your earned points between rounds for randomised bonuses… but I’d sort of like to just play normally against CPU opponents of a gradually increasing skill level, without playing an extra little risk/reward mini-game of whether or not I should spend half of my points on a Full Refill when my health bar has only dropped by a quarter. It also doesn’t help that Survival Mode doesn’t become much of a challenge until maybe round 20 or 30, so without the regular interruptions of online matches, it’s a bit of a slog. 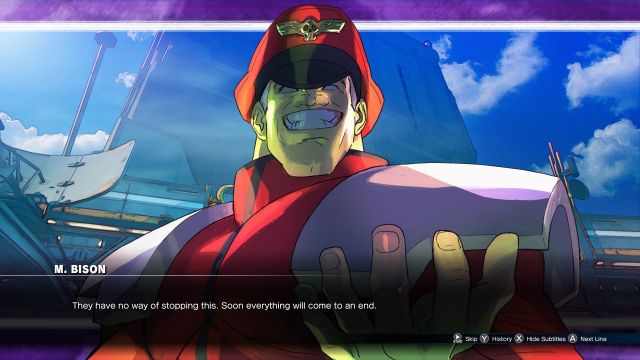 Yeah, but not for awhile.

And no, the argument that Survival Mode and Story Mode are “Arcade Mode, only better” doesn’t fit, and neither does the argument that you can just go into Training, set the computer’s difficulty level, and stop the health bars from regenerating. They’re different to Arcade Mode. Various other fighting games have experimented with “different” types of playable modes, with strategic layers or alternate goals, like Guilty Gear‘s M.O.M. or BlazBlue‘s Abyss. That is not the same thing as having a basic punch-the-AI-in-the-face-as-the-difficulty-gradually-increases mode. And the lack of an option to just have a 1v1 Versus fight against the AI without going into Training is borderline ludicrous, not least because the AI is clearly there.

In short, what you’re paying for now is Street Fighter V: Early Access Edition, and it’s not cheap. If you don’t have issues with the online play then most of this will mean very little to you, and being able to play online and then get bonuses like extra characters and extra modes as the year progresses will be pretty neat. But online problems do exist, and if – like me – you’re unfortunate enough to suffer them, you’re left with a crippled product that will offer barely anything to do for the next couple of months. I want to play it online, but if I wasn’t trying to continue some sort of coverage on this and see if it ever gets fixed for me, I’d have uninstalled it by now.

PC Invasion’s SteamVR Performance Results – How did you do?