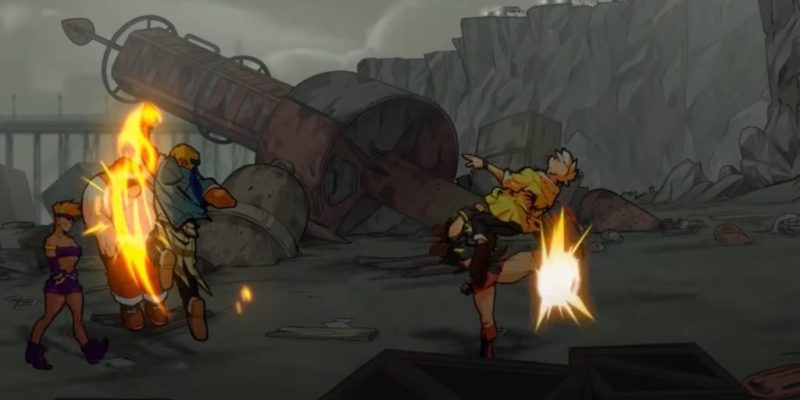 I love Sega’s classic Streets of Rage. Hardly a year goes by without me playing Streets of Rage 2 at least once. But it has been a long time since series brawlers Adam, Axel, and Blaze have hit the dingy pavement. Sure, Sega has tried again and again to reboot the franchise. Developers like Grin and Backbone Entertainment have thrown their hat in, only for Sega to eventually swipe it away. Streets of Rage 4 by DotEmu, however, seems to have hit the right notes with Sega — and hopefully it also will with fans. The gameplay teaser trailer gives us a look of what this reboot of the old-school brawler will offer.

At first blush, Streets of Rage 4 is running the nostalgia engine on all cylinders. Like the Genesis franchise before, the game is purely a sidescrolling beat-em-up — no full 3D-cameras required. The pixelated graphics of yore have been replaced by hand-drawn art that stays true to the style of the original games.

Streets 4 sees a return of Axel and Blaze in two-player co-op. Blaze is sporting a new jacket, while Axel is taking the “buff hobo” look to new heights. Many of the classic enemy types are also making a return, from mohawked ruffians to overweight beefcakes.

Additionally, the game sounds exactly like a classic Streets game. If you run the trailer with your eyes closed, you probably wouldn’t be able to tell the difference between Streets 4 and one of its progenitors. Axel even has his original “bare knuckle” yell during his dash uppercut. 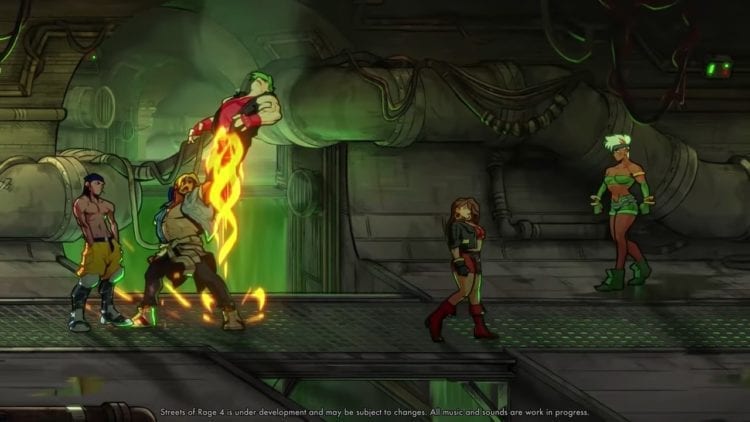 However, you’d likely be tipped off with the music. While the tune does sound like an homage to composer Yuzo Koshiro’s brilliant work with the classic games, it doesn’t quite have his flair. Of course, as the line at the bottom of the teaser points out, all the audio can change as the game continues its development. But I really hope DotEmu keeps the “bare knuckle!” yell. It fits so well, even after 27 years.

Fighting Around The World

Streets of Rage 4 still keeps with the wildly varying environments like its predecessors. In the trailer, Axel and Blaze fight through dank sewers, grungy streets, and even a police building. The differing scenes look gorgeous, each with nice little details: green sewage cascades down vertical slopes, and mist shifts and fades in the cold.

If I had one thing to nitpick, it’s that the game looks a little too dark. Of course, the original trilogy was often dark, following its heroes mostly through the city at night. But Streets of Rage 4 looks really dark, especially with on-screen characters. Even in the daylight stages, Axel, Blaze, and their enemies are cast in shadow. In the original games, no matter how dark the stage, characters and their sentient punching bags were bright and easy to distinguish. Naturally, Streets of Rage 4 is still in development, and it could look different when its finally released.

There is one new upgrade I’m happy to see. At least, I think it’s new; I haven’t played Streets of Rage in co-op in way too long. But it appears that enemies keep their hitbox even if they’re thrown. This basically means that you or your co-op partner can smack airborne enemies back in forth like a fleshy ping pong ball. I can see this changing the co-op combat dynamic in a fun way, where you can call out to your friend to toss a troublesome foe and bat them around until their health bar is depleted. 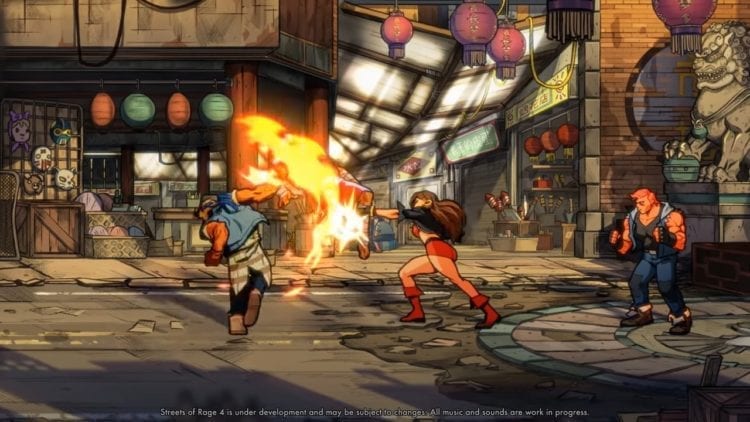 Batter’s up! You can knock airborne enemies around in Streets 4.

There isn’t a release window yet for Streets of Rage 4. Today’s teaser was only meant to whet the appetite for some good-old-fashioned brawler action. But no matter when it comes out, I have a feeling the game won’t likely disappoint. After so many failed attempts to bring back the franchise, Sega clearly has some faith in DotEmu. The company proved its worth with another old Sega property, creating Wonderboy: The Dragon’s Trap, a remake of Wonderboy 3. If any developer can revive Streets of Rage, DotEmu is a safe bet.

Johnny Cage Is Tired Of His Own Sass In Mortal Kombat 11 Old Vs. New Trailer