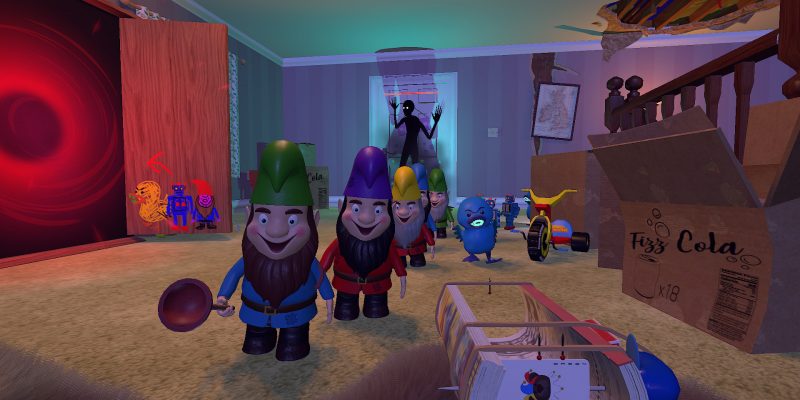 There’s something undeniably fun about playing as toys in video games. The upcoming game Stuffed, which is releasing into Early Access this year, lets you play as a bear that has to fight off waves of other toys. You do this with a bunch of cobbled-together guns, making it a truly all-ages FPS. We got the chance to field some questions to the development team over at Waving Bear Studios and they shined a light on their creative process for us.

(Note: General answers are attributed to the studio as a whole, while specific answers from the individuals staffing it are accompanied by their names.)

PCI: Why was it decided that the player character would be a teddy bear? Will any other toys be playable?

Waving Bear Studio: The original concept was created by Lucy (3D artist), however, we weren’t sure whether the audience would take to it. But after taking Stuffed to gaming conventions, we found that the Teddy character was crossing a lot of age, gender, and nationality barriers as most people can relate to having a teddy as a child.

There are no plans at the moment to make other toys playable, however, you can customize your bear by mixing and matching different fur colors and outfits to make your own style.

PCI: What were the biggest development challenges when it came to making a wave-based shooter stay fresh and interesting for players?

WBS: By far the biggest development challenge would be the procedural generation of the maps. We wanted the maps in-game to be procedural as it would help keep the game feeling fresh each time a player plays. However, having maps being built at runtime affects most aspects of the game, as AI navigational maps have to be rebuilt once the map layout has been generated, different optimization techniques have to be used, more artwork has to be made for the randomness to be noticed, the map layout has to be synced for online multiplayer, the list could go on.

Procedural map generation has brought up a number of interesting challenges that we didn’t account for when we first decided to implement it. However, seeing the positive response we’ve had from players enjoying the randomness of maps each playthrough has made it worth it! PCI: The original prototype was meant for mature audiences. How different was it exactly?

WBS: The original version mechanically is similar to what we have currently. However, as we got to understand our audience more, we took out a lot of what made the game “creepy/scary” and made it more comical/cutesy while keeping the familiar gameplay that initially attracted people.

PCI: How have you adjusted the usual shooter mechanics to make this more playable or enjoyable for kids?

WBS: One of the things we were really aware of during development was to make sure we weren’t “dumbing down” the mechanics of a typical shooter or making it patronizing for kids – we wanted to be able to offer them the same experiences adult gamers get, but make it more accessible for that younger audience. We are however putting a lot of thought into the difficulty curve, so earlier rounds ease players in since kids may not be as familiar with shooting mechanics as we are.

A lot of the adjustments are really on the art side. One of the biggest challenges here was the weapons, as we couldn’t really chuck real guns into Stuffed! That’s how we came around to the idea of building them out of household objects and toys, although mechanically they still play like the gun types more familiar FPS players may be used to. PCI: What were some of the dev team’s favorite toys as kids? Were any enemies picked specifically because similar toys were hated?

Ash: Lego, train sets, and Power Rangers! It’d be pretty cool to do a ‘Megazord’ style enemy made of a bunch of different toys. That’s maybe something we could think about adding in the future. Although now I’m an “adult,” I’m sure I own just as many toys as I did as a kid. I just won’t let anyone take them out of the boxes anymore!

Matt: I used to have a big pterodactyl that I took everywhere with me and fed cookies. On the flip side, I used to have Weeping Angel toys (Doctor Who) and I was always terrified they would move when I wasn’t looking which I guess grew into what the sock monsters are in-game.

Lucy: My favorite toy as a kid was Lego. I loved Harry Potter and became a big collector of the Lego Harry Potter sets, with my favorite being the Hogwarts Castle. Although they’re not a toy, I used to find garden gnomes very creepy as a child. It was just something about their wide eyes and smile that put me off them.

Dan: I’m struggling to remember if I had a favorite toy. I used to spend a lot of time playing Oddworld: Abe’s Oddysee on PlayStation 1. I also had a strange obsession with the 2003 Cheeky Girls album for a period of time.

PCI: Having weapons that are cobbled together toys is a fun idea. Which ones are the devs’ favorites and were there any that had to be cut due to difficulty of implementation?

Matt: We haven’t had to cut any weapons (fingers crossed) as we feel it is an integral part of the aesthetic and have always managed to make them work. My favorite is the Planky McBangBang, as I like how it looks like something a kid would try to make and name.

Ash: There’s an alternate skin for the One Bang (our sniper-style gun made out of a telephone, telescope, and cassette player that fires crayons) with a T-Rex head mounted on the front. Visually, that’s got to be my favorite! But I have terrible aim when it comes to shooters, so when I’m playing, I tend to switch out for more splash-damage style weapons.

Lucy: My favorite weapon is the Sk8rboi, which was named after a certain popular 2000’s song. It’s a skateboard that fires golf balls like a machine gun.

Dan: Jelly Boom Boom because of the name. 🙂

PCI: Will there ever be the possibility of classic-style “find the key” FPS levels, or other styles of play, possibly as DLC?

WBS: We love the idea of bringing in different game modes to Stuffed. As we are very community-driven, we would want our audience to help with designing the game as we go forward. As we move forward from early access to a full release we definitely want to focus on new modes, especially more competitive or PvP-focused modes.

PCI: What real-life toys would the dev team least want to fight?

Ash: It’s got to be a Furby – have you seen one of those without the fur?? They’re terrifying!! And there’s something really off-putting about their eyes.

Matt: I agree with Ash, Furbies used to freak me out as a child.

Lucy: Ash, I see your Furby and raise you Long Furby (don’t Google it unless you want nightmares)

Dan: If the toys were life-size, then it would have to be Megatron. I can fight any regular-sized toy.

We’d like to thank Waving Bear Studio for taking the time to chat with us. I’m very much looking forward to getting my paws on Stuffed when it enters Early Access. Make sure and check back, as we’ll have impressions to share about the game as soon as we’re able.

Before We Leave Steam launch announced plus Team 17 partnership