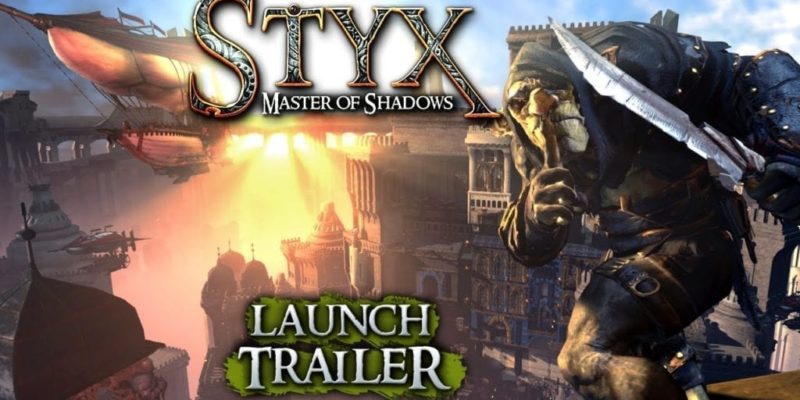 If I were to write this and say that Assassin’s Creed was one of my most favorite franchises–I would be lying through my teeth.

It’s not to say that I do not like or appreciate the stealth genre. The Hitman series has proven that stealth can be both tough, creating a decisive killing method throughout the games’ storyline, but also shows us that it can be serious–but not too serious. There were little hints of humor found in the dialogue and story details that provided a chuckle amidst the extinguishing of mortality. Surprisingly, Styx ventures down a similar path, however it’s done with slightly less finesse.

The story of Styx can be tough to talk about without divulging information that is pertinent to the overarching storyline. At its core you play the role of an orc, whose many conversations take place inside his own head. He often refers to himself as rakash (raa-cash), which is similar to the term goblin or monster. It is made clear early on that you plan to steal the heart of the World-Tree, granting you power that is beyond any others seen before. The tree is heavily guarded in the tower of Akenash, an area surrounded by vaulted castle walls and patrolled regularly by pacing guards. The tree is also of high importance to the Elf clan, as the humans simply due to the substance it produces: Amber.

The Amber is treated as if it were gold and shares in its glossiness. However, it becomes apparent that characters like Styx consume it for its magical attributes. There are multiple abilities that become available after taking your first sip. The experience is almost that of being in a continued intoxicated state. Many times during sequences of dialogue, it becomes apparent that your character suffers from headaches and nausea if more is not consumed. While this is only an aesthetic feature, the fashion in which the substance is treated delivers a feeling of 1920’s prohibition. The Amber continues to be the focus of the game, providing background for the storyline, but also opening up the skill-tree and other combat focused abilities.

The combat of Styx at face value is a multi-tiered experience. You cannot talk about the combat of the game without introduction to its close relative: stealth. The two play a coupled role in providing the overall experience of the game, if not the genre. When it comes to combat, the game opens up to light RPG elements that can be learned, or forgotten. Learning more skills with your clone, which comes to life when vomited onto the floor, can allow you to divert attention in a pinch.

Guards will be alerted if too much noise is made. It is important to crouch and sneak so they do not come any closer to inspect.

There are six facets to your overall experience and skills, having more experience points (XP) delivered based on the missions completed. Each level is divided into the main mission goal, followed by other sub-missions to complete. These can be as easy as killing an opposed associate of your boss to simply nabbing a heavily guarded item. Doing more in each level area will provide you with more XP’s to spend in the skill store. After going back to your hideout, the levels can then be replayed to earn more XP. Skills can be upgraded in the following areas: Stealth, Agility, Cloning, Amber Vision, Equipment and Kill.

After most missions, you are then welcomed back to Styx’ hideout; this is where your skills can be learned, or forgotten–which leaves room for customization over the course of the game. You aren’t stuck with a specific playstyle and given the possibility to change if need be. Each area listed has four tiers in each respective group. There are also options to replay previously completed missions, further allowing you to gain additional XP and sharpen your skills as a silent killer.

If you were to dissect the general combat, it can be broken down into two areas: 1) Open Attacks and 2) Hidden/Stealth attacks. Open attacks include things like leaping from a balcony ledge and pile-driving your blade into an unsuspecting guard. Stabbing a guard in the light or near another without a muffled kill can alert them. But, when the guard is alone, these noisy maneuvers can lead to a quick and necessary kill. The same can be said for grabbing a guard from a ledge and having them fall to their death. It is noise–yet necessary in some instances.

If you are confronted straight on by an opponent, you enter a one-on-one match. Instead of blocking or attacking you simply parry until you are prompted to strike. Even then, you cannot run away if another enemy approaches. This was one area where it is frustrating to take on larger enemies with heavy armor, or even be overrun by others. Some creatures in the game have no sight but great hearing. Once they catch wind of your presence, everyone near will run over and attack. Enemies shoot a poisonous substance that can kill you within a few strikes. So, wielding stealth abilities must be approached with care. If you do not want to be detected at all, then the best bet is to make the crime scene look like an accident. Unhinging chandeliers or netting full of crates will make the guards only inspect the crash briefly and then go about their business.

Hidden or stealth attacks become challenging, yet important, to the overall experience of the game. Each level/map challenges that player to choose the path in which they will decide how to progress the story. There are instances of non-linearity, but I did find that it is possible to jump ahead of important sequences that were supposed to take place in order to progress the story. Instead, paths that pacing guards were supposed to take stayed the same, and other animations were halted. There were only a few times this occurred, leaving multiple areas to enter, hide, swing, or climb almost impossible to enter.

The game as a whole took a lot into consideration in terms of becoming a tactical, hidden killer. There is a lot of emphasis on timing, hiding, and noise diversion. Hiding in the shadows can save your life, if you manage not to knock over a chair or kill a servant too loudly. However, one particular flaw in the game left the experience to be more frustrating than satisfying.

The physics of the game delivered a 95-percent accurate portrayal of what might actually happen during kills. However, there were numerous instances where the ragdoll effects were thrown out of proportion, sending quietly killed guards flying through the air. It wouldn’t have become so much of a nuisance if this occurrence was isolated. Instead, it left me replaying mission(s) over-and-over again to try and avoid this guard-flinging simply due to the fact that it was alerting other pacing staff in the area. I will admit, it was comical at times seeing a soldier vault into the air for no apparent reason, but then the frustration sets in.

The sounds of a game can often times ruin your experience. In the case of Styx, it becomes your fre-nemy. Alerting guards will drive them to come and inspect the area in which you are in. The alerts are both visual and audible. This allows players to make adjustments in their pace, or hiding place. I found that it was hit-and-miss. At times, making noise in front of guards didn’t do hardly anything. But, closing off a freshly lit torchlight or throwing a mud-ball drew their attention. The background music of the game, however, did provide for a comforting experience.

I found that the music scores for Styx was impressive and quite nicely fitting. The slow plucks of stringed instruments were welcomed during flights of castle stairs, delivering an expected atmosphere for the era.

The voice acting for the game was also nicely done. I felt that the game was very well written in terms of phrases, and the overall use of vulgarity really drove home the game’s image. If there was one thing that I would have changed, it would have been improvements to the character animations to accompany the strong writing. I often found missed cues for mouth movements or none at all during lengthy conversations.

While graphics are not necessarily everything, I did find there to be more desired under the hood. From flat textures to lowly detailed NPC’s, there was a lot more polish that I feel could have been done. My PC can handle decent settings for most recent games and I was running Styx on all high settings. I feel like my PC did not struggle and could easily handle higher detailed textures.

Overall, I can say that the experience of Styx was pretty enjoyable. There were laughable moments in dialogue, backed by strong gameplay mechanics. The biggest thing that left me wanting more, was simply the fact that the game didn’t seem to be polished to the best of its abilities. The physics system was a lackluster experience, often leading to replay portions of a map over-and-over again. The auto-save is an abomination, leaving players to save, save, and save out of mere anxiety.

Even with the lapses in an overall sense of completion, the game allowed for a lengthy story experience and further proved that Styx is–silent but deadly.