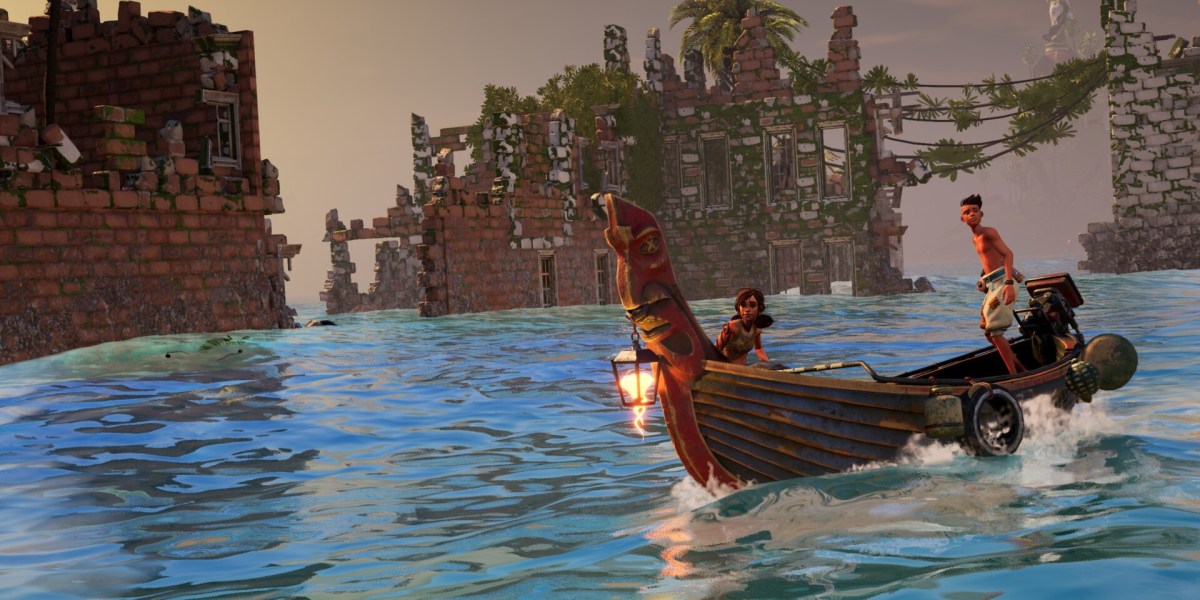 Sometimes, a short game that’s solely about exploration is exactly what the doctor ordered. Okay, not a real doctor. This is a purely metaphorical doctor. Submerged: Hidden Depths is a follow up to the game from 2015 built using Unreal 4. And it’s, honestly, extremely lovely and relaxing. The lack of combat, or much of what most would consider gameplay, certainly makes it a game that isn’t for everyone. But for people who want to chill out while riding the waves and exploring the game’s sun-soaked, ruined city will find a worthwhile experience here all the same.

Submerged: Hidden Depths tells the story of siblings Miku and Taku. Chased from every home they’ve ever known due to Miku’s “gift,” which causes a collection of plant roots on her arm to bloom into flowers when she’s near giant plant seeds, the two have been looking for a new home ever since. There isn’t much plot here. The story focuses on the connection between the siblings, and the reality of their situation. Backstory comes via short journal sequences between finding seeds. There are also journal entries that fill in more gaps if you want to seek those out.

The game’s structure is very simple. There are 10 or so seeds that need to be placed in planters to fight off the Black Plant, which is a scourge that has decimated the world. As Miku, you use a telescope to look at the world around and mark new points of interest on the map. The seeds are the only plot progression element and, once you find them all, you finish the story. Of course, they only represent a piece of what you find on the map, as there are a fair amount of additional things to see. 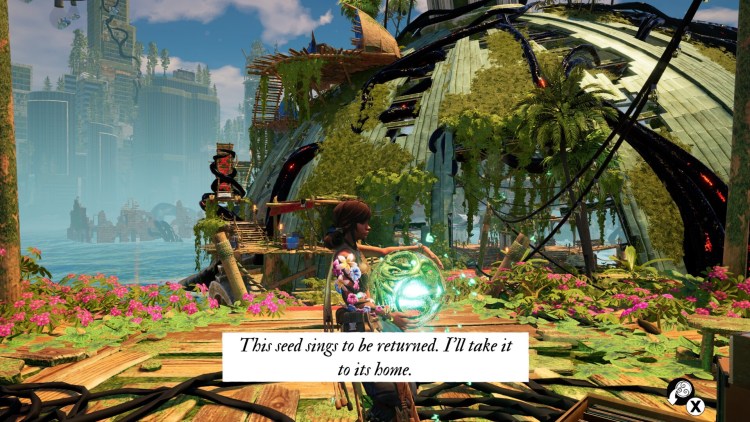 You primarily get around in Submerged: Hidden Depths via Miku and Taku’s boat. The game world is inviting, and the water is visually impressive as the small vessel skims the surface. The boat controls well enough, and even has a boost that you can use to move more quickly. You can increase the boost by finding boat parts in the water that are marked on your map with a propeller icon — the more you find, the longer the you can boost. So it’s helpful to keep an eye out for the icon. You can also find relics to pull up, landmarks, vantage points to get to the top of, and over 50 journal entries.

While you mostly control Miku, but, when you find locations that solely contain a journal entry, the game at times switches you to Taku. They play identically, but the movement is mostly automatic to begin with. When you find a seed or a journal, you can disembark at a location’s entry point, often after making it available by pulling a ladder down with the boat’s winch. You’ll also occasionally drag a buoyed bridge into place with the winch to create a pathway. Once you’re walking, there isn’t a great deal of control, though.

Miku and Taku move at one speed and can’t jump, so they’ll automatically clamber on pathways and climb any suitable surfaces. Everything controls well enough, but Submerged: Hidden Depths doesn’t have much of anything you could classify as action. Neither character can get hurt either, as they can’t fall and there are no enemies or hazards to be found. Other than that, there are elevators to take you up and down.

When you find a seed, Miku will pick it up and carry it. Seeds can be placed in transportation devices that move them around areas so they can reach their planters. Figuring out how to get them from Point A to Point B is very clear, though, so it’s not difficult to find your way. 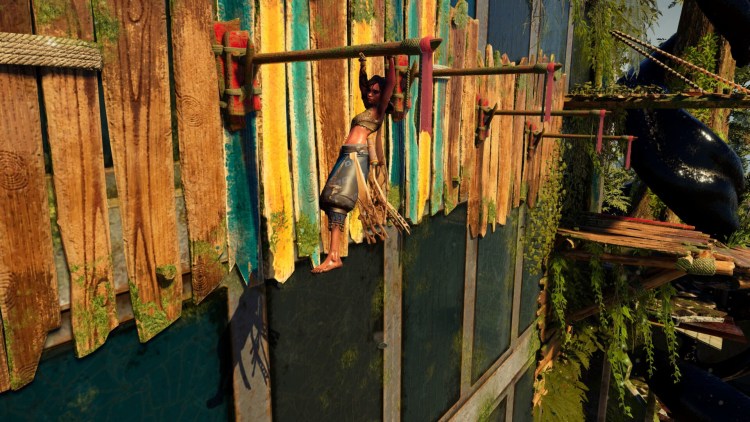 Each of the seeds in Submerged: Hidden Depths requires you to visit a specific location. Many of these oblige you to make your way up ruined buildings, such as a dilapidated hotel. There’s also a wrecked ship you need to traverse. The locations, much like everything else in the game, look great. Despite being an indie game, it is rather beautiful. It also runs well, and I enjoyed playing the game at over 100 fps.

However, the adventure doesn’t last long. If you ignore everything but the seeds, you can beat the game in three hours. Doing a mix of optional exploration will make it closer to four hours. Attempting to track down everything will probably take about six or so. But the game is relaxing enough that I don’t feel like it needs to be lengthy. Any longer would only be dilutive. That said, a lot of the optional stuff feels truly superfluous. The landmarks are cool to look at, but they serve zero purpose.

Similarly, seeing junk get dredged up from the ocean is neat because it’s modeled but, again, it does nothing. It’s just a thing to have on the map. You can also find flowers to decorate your home base. The boat parts are the only collectible that actually makes any sort of gameplay difference. But considering that there’s isn’t much in the way of gameplay to begin with, I’m not sure what else could have been added. All of the seed locations also have their own sets of collectibles to find. If you find them all, you get a new outfit or boat skin or something. 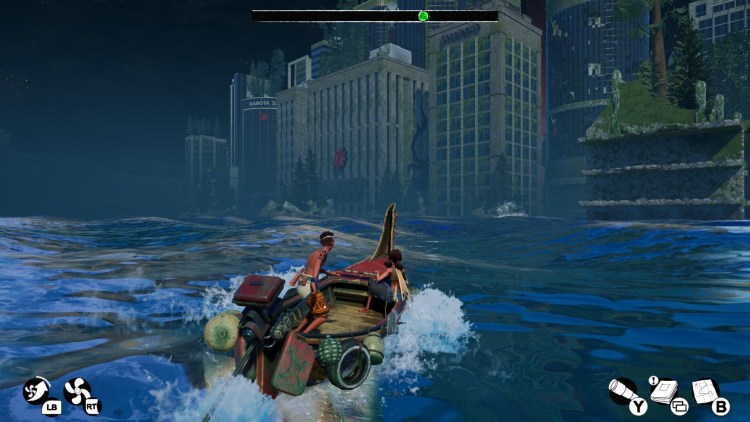 I say “if” and not “when” because it’s surprisingly hard to find all of the seeds. Even though I thought I was fairly thorough, I wasn’t able to complete a single set. The journals are similarly all over the place. I imagine tracking them all down would be a bit of a pain, but those are at least marked on your map if you get close to one. Submerged: Hidden Depths is worth experiencing if the prospect of exploring a small, detailed open world on a boat with nary a threat in sight appeals to you. There’s not much to it, and it’s quite short, but that adds its own amount of charm.

Relaxing and lovely, Submerged: Hidden Depth doesn't have much in the way of gameplay, but it's still a nice experience for anyone who wants to explore its sunken world.

By Martynas Klimas13 hours ago
Reviews