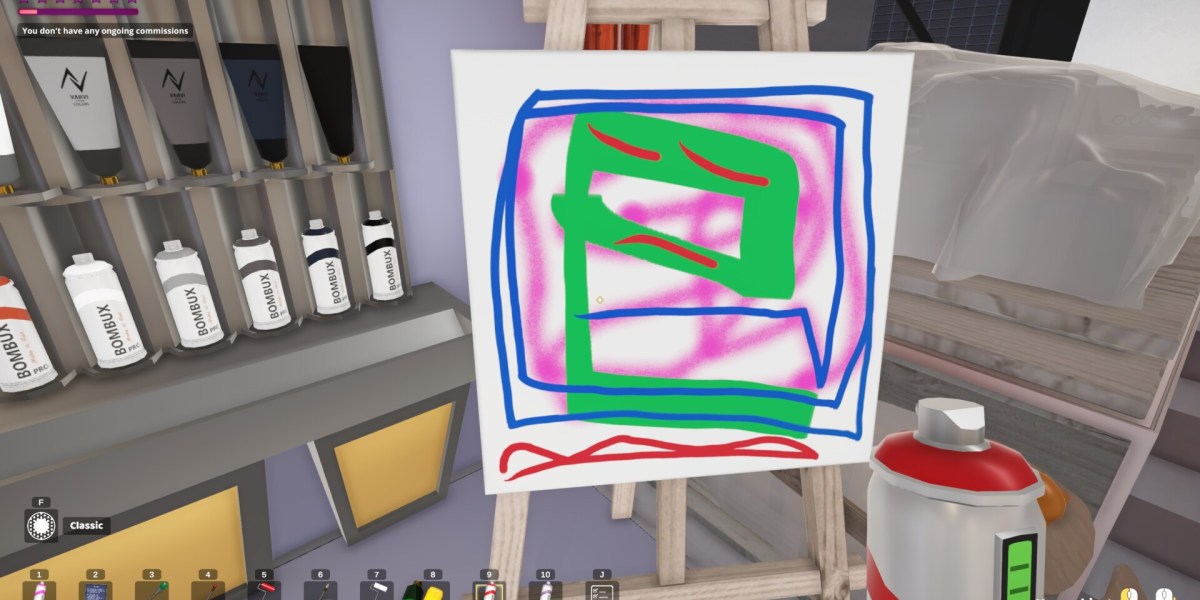 To be upfront, I have no visually related artistic talent. None. Zilch. Zero percent. I saw a game about painting and went, “yeah, I’d like to cover that!” And I can’t begin to tell you why. Some of us are just ridiculous. SuchArt: Genius Artist Simulator is a new game all about painting and creativity that has just entered Early Access. Although the art I’ve created is purely terrible and could be easily replicated and improved by a small child with even the tiniest bit of ability, it’s still an interesting, innovative game with a lot to offer. But the question stands: is SuchArt! already worth it in Early Access?

Astoundingly, SuchArt has a backstory, a strange setting, and a campaign mode. When you first start, you can choose between the regular campaign, a sped-up campaign where you earn money and fame faster, and a purely creative mode that grants you everything right off the bat. Which you’ll pick is, of course, completely up to what exactly you want out of the game. I need a guided experience, so I went with the default story mode. Not long after, I felt surprised by the amount of effort that’s been put into the game.

SuchArt takes place in the future where the Earth has been invaded by an alien species of crab creatures. Are they dangerous? I’m not actually sure! For whatever reason, though, you’re on a space station. The game begins when you move into your new space studio and are immediately set to work. Your goal is to accept commissions and turn them in, sell paintings on the marketplace, make money, and increase your fame along the way. The game presents you with a series of quests in your journal, such as fulfilling commissions, selling a certain amount, or just completing a variety of tasks. It’s all easy to understand and quite focused. At first, your initial goal is to paint a picture of a unicorn on a large canvas for your sister’s birthday. That was a bit of a tall order for someone like me, so I half-assed something horrible and sent it on its way. The painting is in-depth and totally logical, though. You can equip different-sized brushes, rollers, spray cans, and the like, swapping between them freely. After a bit, you’ll unlock smaller canvases that you can print at will. Then you simply use the terminals nearby to send them to your customers or to put them on the market. I immediately painted on a terminal screen and had to stop and search for a way to remove paint before I could continue. There’s a sponge upstairs that does just that. Also, you can paint on everything.

In one part of your workshop, you can choose from a selection of paints, or you can custom make your own based on a color palette. Then you can place paint on an easel and put it on your brushes to get started. I’m sure people with talent will be able to make some impressive things. Me? Not so much, but that’s okay. SuchArt runs well and is as clever as it is intuitive. If you want to play a painting game, then this is a great choice that is already very much worth it in Early Access. Here, look at one of my monstrosities: