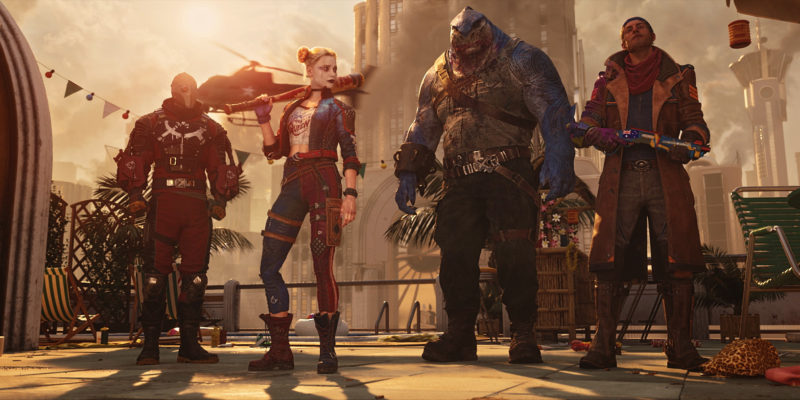 After weeks of waiting, we finally witnessed the Suicide Squad: Kill the Justice League trailer reveal this weekend at DC Fandome. After the trailer, Will Arnett, who hosted the panel, spoke with Sefton Hill, the creative director at Rocksteady Studios. Hill gave a little more information about the anticipated game.

The first thing made clear in the trailer is that the game looks gorgeous. Hill said Suicide Squad: Kill the Justice League takes place in a fully-realized Metropolis in the midst of an invasion by Brainiac. This iteration of Task Force X consists of Harley Quinn, Deadshot, King Shark, and Captain Boomerang. The team at Rocksteady clearly understands these characters, and has their personalities nailed down perfectly. It was also stated that this game does take place in the same universe as the Batman Arkham games.

There isn’t any gameplay in the trailer, but we do get to see some cinematic beatdowns from each member of the team. Each member of the Suicide Squad also shows off their unique weapons. Harley has her bats and grenades, Deadshot wields various guns and a jetpack, King Shark dual-wields giant cleavers and carries around a chain gun, and Captain Boomerang has… well, you know. To be fair, it looks like his boomerangs have a blink ability that can send Boomer flying around the screen.

At the end of the Suicide Squad: Kill the Justice League trailer, the team gets a look at their target, Superman, who is being controlled by Brainiac. The team is obviously less than enthusiastic about the prospect of taking on big blue, but that is the name of the game after all. Literally. Hill goes on to say that the game can be played single-player or via four-player online co-op. In single player, the rest of your team will be replaced with bots. However, you will be able to switch between characters on the fly, which has its own perks.

The game is scheduled for a release in 2022, presumably to give the other big DC game coming out in 2021, Gotham Knights, some room to breathe.